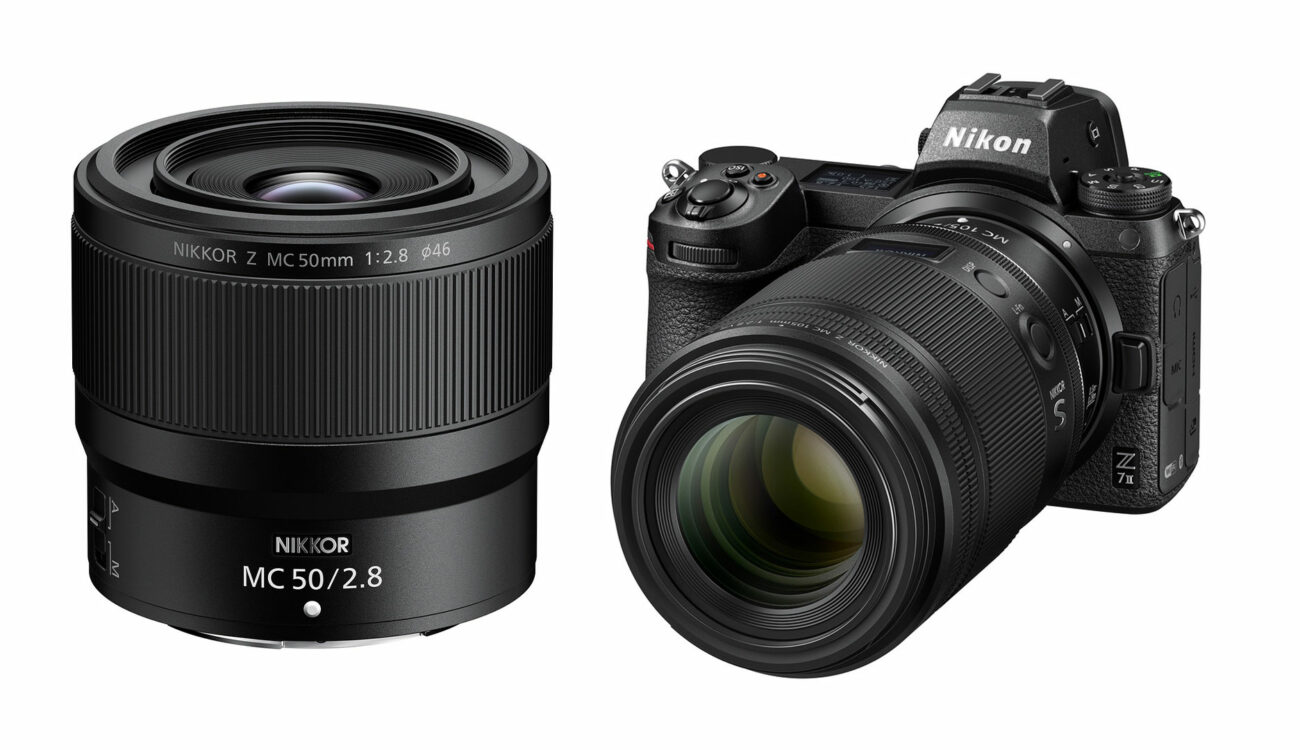 These new lenses are of course natively compatible with Nikon Z cameras, including the Nikon Z 6II and Z 7II that now have RAW video output to Blackmagic Design Video Assist 12G external recorders, as well as the upcoming flagship Nikon Z 9 camera.

The Nikon NIKKOR Z MC 50mm F/2.8 covers full-frame sensors (FX), so it is also compatible with cropped sensors (DX). The lens sports a 1:1 reproduction ratio, with a minimum focusing distance of only 16cm/6.3″.

As you can tell, the closer you focus, the longer the barrel extends. The Nikon NIKKOR Z MC 50mm F/2.8 doesn’t have built-in image stabilization, but it has an STM motor and focus limiter switch for fast autofocus performances. The lens is made of plastic and is only “dust and drip-resistant,” so it is not completely weather-sealed.

The lens design consists of ten elements in seven groups, with a fluorine-coated front element to resist dirt and smudges. The aperture diaphragm has nine circular blades for smooth, round and creamy bokeh. The front filter diameter is pretty small at only 46mm, but it is compatible with the “ES-2 film digitizing adapter set, which can be screwed onto the front of the lens for digitizing 35mm film,” according to Nikon.

The Nikon NIKKOR Z MC 105mm F/2.8 VR S is a much “higher-end” lens, compared to its little brother. Even if they have similarities: a 1:1 reproduction ratio covering full-frame sensors and a fluorine coating to the front element.

As you can tell, this is an S-line lens, which is Nikon’s high-end series of lenses, and it doesn’t disappoint. In terms of lens design, the lens consists of 16 elements in eleven groups, and the aperture diaphragm has nine circular blades.

You’ll find three extra-low dispersion and one aspherical element on the inside to reduce distortions, color, and chromatic aberrations as well as color fringing. In terms of coatings, you’ll benefit from an ARNEO anti-reflective coating, used in conjunction with Nano Crystal Coating. The front filter diameter is 62mm.