This is it, people! The brand new Panasonic LUMIX S1 and S1R are finally here and from what we’ve seen so far they look impressive. Let’s take a deep dive into the features and differences of these new mirrorless cameras! 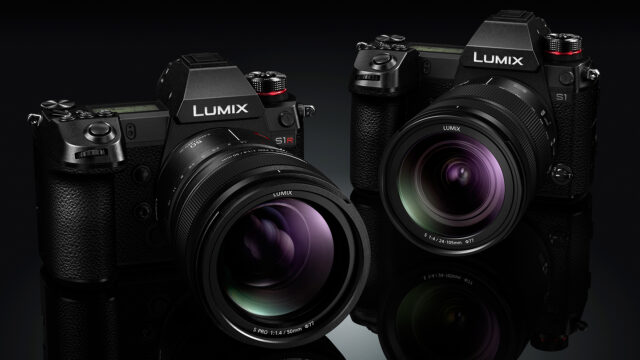 The perfect camera has yet to be invented but it seems that Panasonic has taken this challenge very seriously with their new LUMIX S1 and S1R full-frame mirrorless cameras. The two new models tick a lot of boxes when it comes to both still photography and video features. Furthermore, the company has already gathered a ton of experience with their GH5 and GH5S in regards of usability, features and –most importantly for us indie filmmakers–  a clear focus on pro video capabilities.

Both models look identical from the outside, the only real difference is the red “R” on the S1R. Other than that both models share the exact same housing. Internally, it’s a different story, obviously. For starters, the LUMIX S1 sports a 24MP full-frame sensor while the S1R features a 47MP sensor. The S1 is more focused on filmmaking while the S1R is aimed at pro photographers.

In regards to our industry, the LUMIX S1 seems to be very well suited to the needs of professionals and indie filmmakers alike: Full HD 180fps (4:2:0 8-bit) and 4K50p/60p 4:2:2 10-bit video is possible and this is a first in the full-frame mirrorless game! This feature comes with a few downsides, though: 1) 4K50p/60p is only available via external recording through HDMI. 2) A –paid– software key later this year is needed to unlock this (and other) features. 3) 4K50p/60p is limited to 15min (even less if the environment is very hot – the camera will stop the recording in order to protect itself). 4) Due to the different sensors used, the LUMIX S1 will switch to a 1.5x crop in 4K50p/60p mode while the S1R keep its 1.09x crop for video consistent throughout all modes (but offers 4:2:0 8-bit only).

Speaking of that paid software key for the LUMIX S1: Along with the upgrade to 4:2:2 10-bit, a V-Log profile will be added, too. The following shooting modes will be enabled with that upgrade:

Furthermore, the S1 sports a Like2100 (HLG) profile which the S1R lacks. Both cameras share Cinelike D / Cinelike V and Like709 profiles. There is no 29-min recording limit anymore, the only limitation is heat and that’s why both cameras are limited to 15 min (or less) in high speed mode.

Features of the LUMIX S1 and S1R 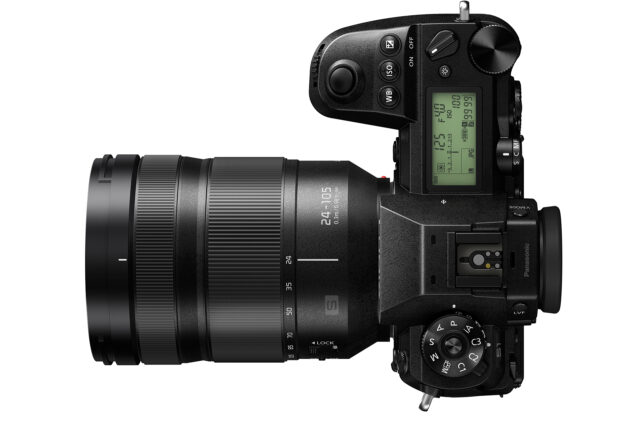 According to Panasonic, the LUMIX S1R flagship camera with its 47MP full-frame sensor is aimed at pro photographers while the 24MP S1 is more tailored for the video crowds who doesn’t need the massive resolution of a nearly 50MP sensor. Simply put, the S1R has all the pixels plus lower end video features, the S1 has everything for video minus the megapixels pro photographers might be after. In order to fully utilize the potential of the LUMIX S1 (4:2:2 10-bit & V-Log), you must also take into account the cost of the software key that comes later this year.

The next big thing the LUMIX S1 and S1R inherit from the GH line of mirrorless cameras is the superb IBIS (in body image stabilization). For the S1 and S1R it’s rated at +5.5 EV for the IBIS only and +6 EV when combined with the two-axis image stabilization with a compatible lens attached. This is really good news since experience shows that shooting handheld can be a bit tricky with a mirrorless camera which lacks weight and therefore normally does not rest on your shoulder. 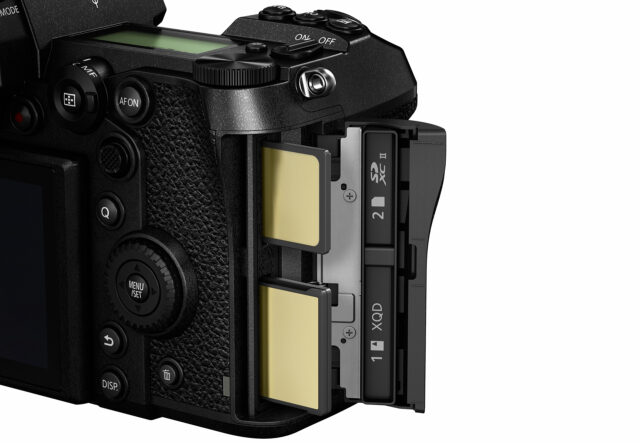 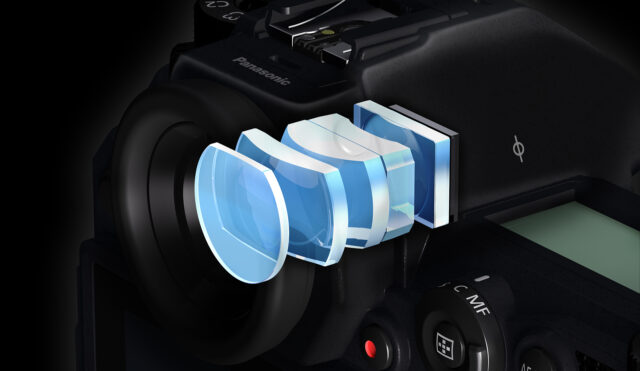 The 3.2″ (8,1 cm) touchscreen sports a 2.1MP LCD multi-touch display and features anti-fingerprint coating, just in case. The display is mounted on a triaxial tilt rear monitor that allows it to flip out for low or high angled viewing in both portrait and landscape orientation. 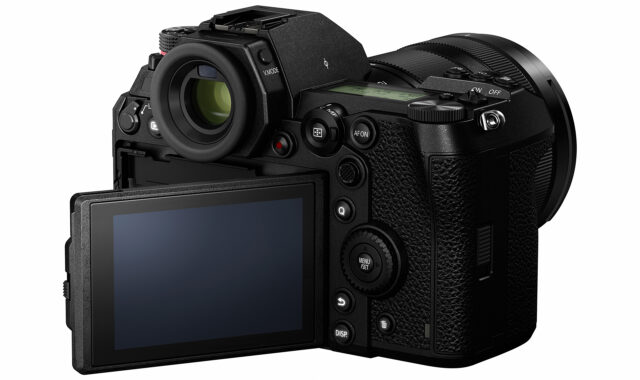 Please note: Unlike the GH5, however, the display cannot be swiveled into selfie mode.

The LUMIX S1 and S1R are Panasonic’s first cameras sporting the L-Mount. The newly formed L-Mount Alliance (read all about it here) is a consortium of Leica, Sigma and Panasonic. Right now, only Leica has some L-Mount glass on display, but Panasonic is following suit with three new lenses.

The three new L-Mount lenses are:

One neat feature is the newly designed focus ring which can be pulled back to reveal the focus scale (= manual focus mode) or pushed back to hide it (= autofocus mode). Furthermore, you can set the fly-by-wire focus behavior in camera: Nonlinear (focus change dependent on rotary speed), Linear (constant focus change) or set the desired rotation angle yourself, from 270° all the way to 360°.

Both zoom lenses sport optical image stabilization, which –as stated above– can be combined with the IBIS of the body itself to compensate up to 6 EV. While the 24-105mm seems to be a decent all-purpose zoom range I personally would have preferred an F2.8 lens (which would have resulted in a very pricey lens, I’m sure). On the other hand, this lens is also a macro lens, which can be really handy especially when paired with such a versatile zoom range. 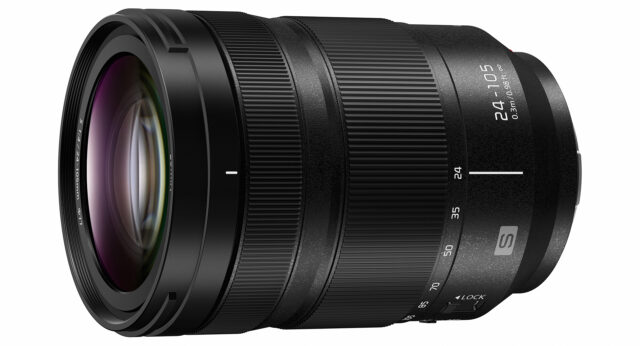 A ‘nifty-fifty’ is a must in any lens lineup so Panasonic delivered one with an impressive F1.4. And of course, a classic 70-200mm lens is among the first L-mount lenses by Panasonic. Again, ‘only’an F4 but with optical stabilization which is nice to have with such a long focal length. 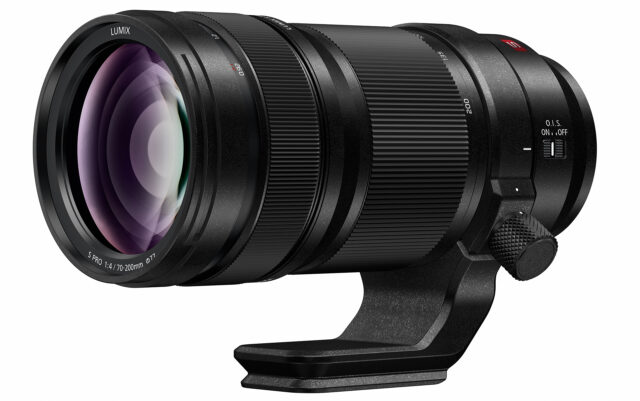 Panasonic claims that there will be at least 10 L-Mount lenses by the end of 2020. Furthermore, there are already 8 lenses available by Leica themselves plus three more by the end of 2020. Also, Sigma has already announced 14 L-Mount lenses and an EF adapter. As you can see, the L-Mount is not a dead horse at all! Let’s wait and see what new lenses come out over time.

These new mirrorless cameras seem to path Panasonic’s way into the future. Both models come with a really impressive set of features without too many compromises. The engineers tweaked the menus even further, making them easier to navigate. Video and still photography menu items are separated from each other more clearly and the physical buttons are highly customizable.

Sure, some kind of internal ND system would have been nice but other than that there’s very little to ask for. Let’s wait and see how first hands-on impressions and reviews hold up to the expectations here.

UPDATE: As per our own Johnnie, who has attended the Barcelona press event, the LUMIX S1 seems to be a pretty decent full-frame mirrorless camera. The IBIS seems to perform well and the overall build quality seems very robust and rugged. The autofocus, however, lacks a bit consistency. Hopefully this will be improved via firmware update. Note that Johnnie had a pre-production model so things could change until the release. Check out the above video for all his thoughts about the new S1 camera. A full review is coming so stay tuned!

What do you think of these two new cameras? Are you going to invest in the L-Mount system? Share your thoughts int he comments below!

Full disclosure: Johnnie and other media representatives were guests at Panasonic LUMIX S1 launch event in Barcelona, Spain. Panasonic paid transport and accommodation for this 2-day trip, but there was no other payment involved whatsoever.