Working on set means working independently from the power grid most of the time. So a bunch of different batteries for all of your gear is mandatory. Or you head over to Kickstarter and support the guys behind Blind Spot Gear in making their latest product a reality: The Power Junkie. A small device maybe, but a pretty clever one for sure. 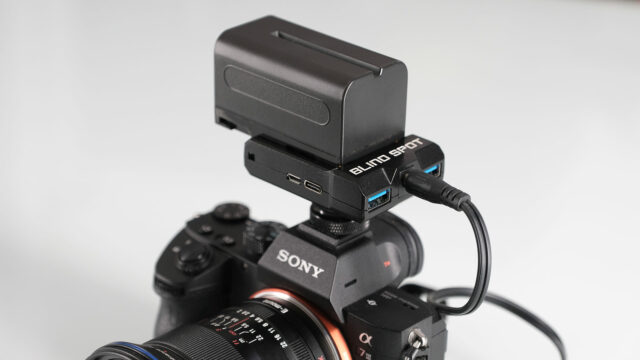 Basically the Power Junkie is a tiny battery mount for Sony L-Series batteries which come in three sizes: NP-F 550 (around 2600mAh), NP-F 770 (around 5200mAh) and NP-F 950 (around 7800mAh). Two USB 5V outlets and a barrel-type 7.2V outlet give you plenty of possibilities of powering several devices around your camera setup.

Furthermore you can charge the attached Sony battery via USB C or micro USB. The whole thing mounts via a 1/4 20 thread or a cold shoe mount to your rig. You even can use a standard cable tie and mount it to about anywhere. Neat!

The Power Junkie is the third product Blind Spot Gear is bringing to Kickstarter. The first one was the so-called Tile Light, the second one was the Scorpion Light. Both campaigns were pretty successful so it’s safe to say that we’re talking about a reliable company here. We also have gotten to know the guys behind the product and have no doubts that they will deliver.

Actually it’s a little strange that nobody came up with this idea before, like Nino says in the review. The Power Junkie is a really basic, yet super helpful product. It sports a power indicator (something the Sony L-Series batteries themselves lack) and it’s capable of powering your DSLR or mirrorless camera for a whole day. Just add a fitting dummy battery and you’re good to go.

Another neat thing is the variety of mounting solutions. A 1/4 20 thread, a cold shoe mount and a tiny loop for standard cable ties, it’s all there. All in all this product is really pretty much self-explanatory. The trick is to bring down the count of different styles of batteries. All you need is a bunch of Sony L-Series ones and that’s it. No different chargers, no myriads of different make and models of weird battery systems. Blind Spot Gear have chosen the de-facto industry standard of camera batteries.

You’ll find a Sony L-Series style battery almost everywhere around the world. They are robust, reliable & battle-tested. Sure, for a larger digital cinema cameras you’ll end up using V-mounts or Anton Bauer gold mounts but for DSLR and mirrorless cameras this tiny addition to your rig will save you from hassling around with a pocket full of batteries. 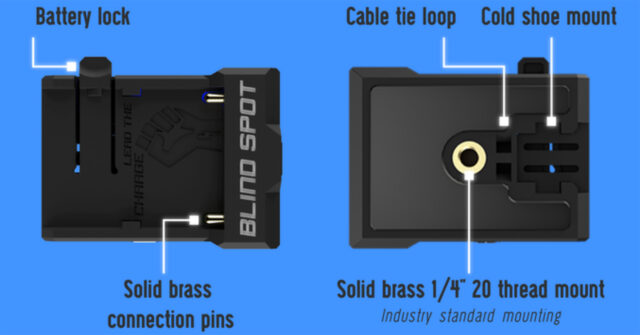 You can add battery dummies for all major brands, including Sony, Canon, Fujifilm, Panasonic, Nikon and Blackmagic Design. And, thanks to the USB outlets you also can charge your phone while on the go. Or a GoPro for several days if you want to.

Please keep in mind that Kickstarter is not a shop but a platform for funding projects. Estimated delivery is December 2018 and if nothing goes wrong that should be the case. Blind Spot Gear have a good amount of experience with manufacturers and assembly chains by now so I’m pretty positive that they’ll manage to deliver a solid product in time.

What do you think? Is this Power Junkie something you want to add to your gear bag? Share your thoughts int he comments below!