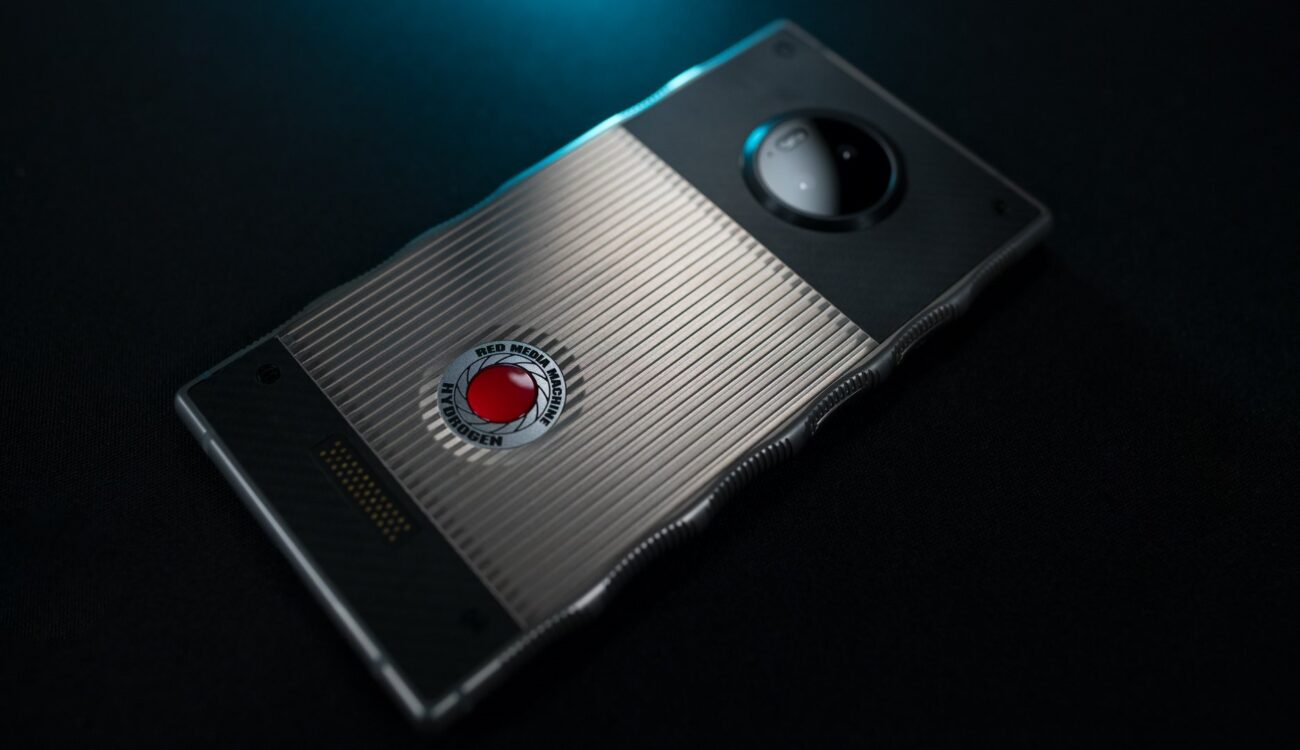 The awaited new phone – RED Hydrogen One – was presented as a working prototype few days ago to invited RED owners at an event in Los Angeles. The final product should hit the stores this august. Here summarize the info and hands-on experience with the holographic device. 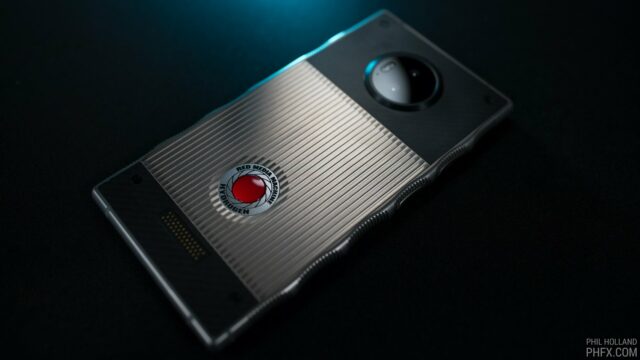 RED Event for Hydrogen in Hollywood

On May 19th RED held an event in their studio in Hollywood for an invited audience of RED camera owners and they presented the working prototypes of their RED Hydrogen One phone. Invited guests got a chance to play with the phones and to experience the unique holographic display. Under one condition – they asked that no one should post a photo or video of the display at work. As Jim Jannard mentioned it would “ruin the first impression of it for everyone.” It makes sense: a 2D photo or video cannot transfer the holographic experience to the viewer. Just like HDR can’t be shown on a normal display.

We already posted about the first hands-on with the RED Hydrogen last August, when YouTuber Marques Brownlee got to play with the first “dummy” prototype. At the beginning of this year we reported about updates to the RED Hydrogen phone. Now, after the dedicated RED event, it is clear RED has working (near final) prototypes and they will most likely be able to deliver the final product as promised: The mysterious RED phone should be coming this summer in August to AT&T and Verizon networks in the US (no word about other countries yet). The company plans to ship the pre-ordered phones a bit earlier, in July.

Let’s sum up what we already know about it. 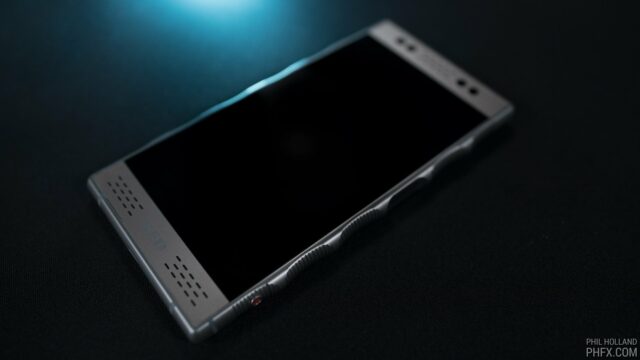 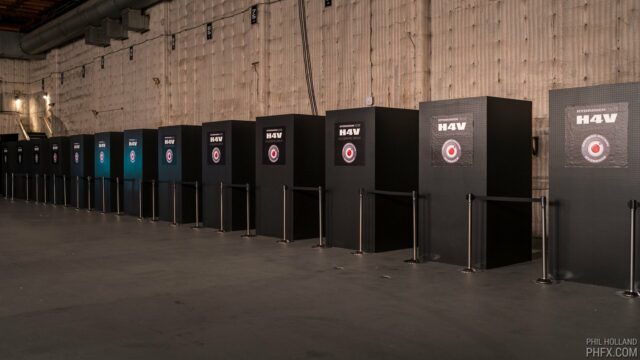 No Smartphone, a “Media Machine”

We don’t know much about the RED Hydrogen One, but the existing specs alone are not somewhat impressive against current smartphone flagships, especially given the price. RED’s new phone is however a category of its own – mainly because of the display, but also because it is supposed to be a part of a new ecosystem RED is creating. The company actually does not want to present this device as a smartphone. Instead, they call it a “media machine”. 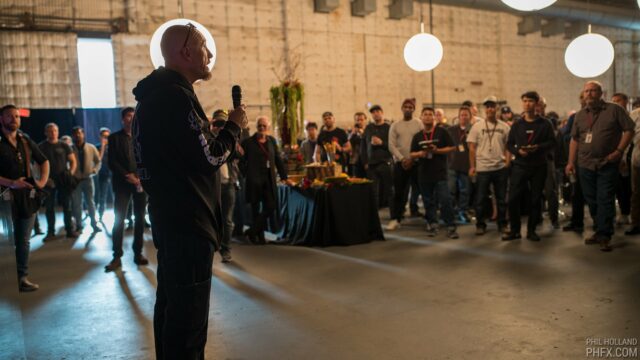 There is a live video from the RED event where we can hear Jim Jannard saying: “RED Hydrogen is not an event, it is a beginning of a very long programme.” See below:

It is supposed to be the first product of a starting ecosystem. That could be the unique selling point for the Hydrogen. If the ecosystem will be good and widely supported with multiple good modules. It is worth noting though, that other manufacturers have already tried and failed delivering a good modular smartphone.

One of the invited guests was Dieter Bohn from The Verge. His hands-on experience with the RED Hydrogen One is nicely summarized in this video:

As Dieter wrote in his article – the phone feels really big. With its 5.7″ display the body is larger than an iPhone 8 Plus. In terms of design it kind of stays in the line with other RED products – talking industrial style with lots of fins and ridges. Many parts of the phone’s body are metal. The phone’s both edges have grip-like scallops for an easier one-handed use. Power button is located on the right edge and it has a fingerprint sensor.

The holographic display is RED’s secret weapon (see what I did there?) and should be the phone’s unique selling point. The fact that they are so mysterious about it and only share videos of people’s first reactions reveals how proud they are about the technology. According to RED the experience is “so much better than any 3D technology till now”. The display technology is called 4-view. The idea is that the display should give a “holographic” 3D experience of the content without the need of any glasses.

Dieter tested two different 4-view demos on the phone’s prototype and wrote about it:

In the first, I watched a loop of a bunch of different videos, and what I saw was a big step over 3D on other phones. Essentially, I was able to move and tilt the phone around without the 3D effect becoming broken. It worked in both landscape and portrait, and the depth of the 3D was also better than I’ve seen on a phone before — but, of course, that’s not very strong praise.

The second demo was also impressive. With a Hydrogen One, I was doing a simple video chat with somebody across the room. But this was a “Holo chat,” so both my face and theirs were displayed as holograms in real time. There are two front-facing cameras, as you need two to make a 3D effect.

As for how RED is making this effect happen, it’s complicated to the point of sounding like handy-wavy science fiction filler. Jannard told me that there is a special layer underneaththe LCD display, which, when enabled, is able to direct light in multiple directions instead of the standard two that happen with lenticular displays. RED is also doing more than just combining two images to make standard 3D. I’m told it’s trying to use an algorithm to blend multiple angles from those two lenses to create the effect.

It’s a hologram, basically, but it doesn’t really pop out of the screen so much as give you depth within it. I wouldn’t describe this screen as the reason to go out and buy this phone, but it was neat. 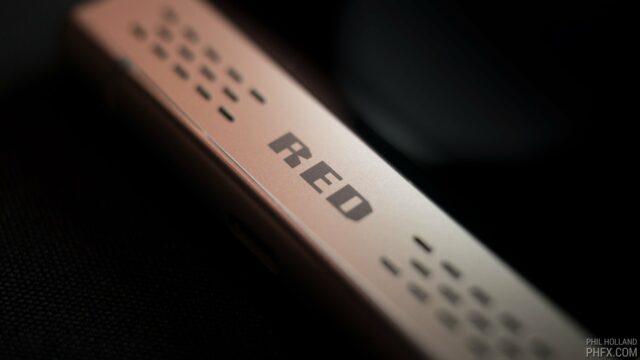 RED Logo on the front side. Photo credit: Phil Holland

The RED Hydrogen One should also be very capable in terms of audio reproduction. At the RED event guests could try the audio experience both with just the phone and with high end headphones. The A3D Spatial Surround Audio – the 3D sound experience – should be possible with the phone even with a regular stereo audio file. RED’s algorithm should be able to convert the audio in the 3D surround experience. No Film School was also there at the event and they wrote about the sound:

At the demo station an audio file was played through a pair of Bose QuietComfort 35 II noise-cancelling headphones and it was remarkable. It was like sitting in a Dolby Atmos mix. You could hear low end, high end, different EQ, all the panning, the directional changes, depth, movement, distinction in similar sounds… They did have another listening station without headphones and the experience with all the crowd noise around us was just as fruitful. While turning the device in any direction you didn’t lose much sound clarity.

All in all, the new RED Hydrogen One will not be a product for the masses. We don’t know much about the phone yet, for instance there is no info yet about the built-in cameras or memory size. I am curious what the final full specs will be. The overall success of the phone in my opinion depends on the usability of the holographic display and on the quality of the content and the whole new RED Hydrogen environment with the expansion modules. In the end, we don’t know much about the modules yet either. I guess we will soon know more.

Next chance to get your hands on the RED Hydrogen One will be June 2-3 at the AT&T Shape event in Los Angeles, so if you are in the area and feel the need to see the holographic display with own eyes you shouldn’t miss it. Note that a $100 registration is neccessary to visit the event – you can do it here.

Did you pre-order the RED Hydrogen One? What do you think of the hype and specs so far? Feel free to comment below.