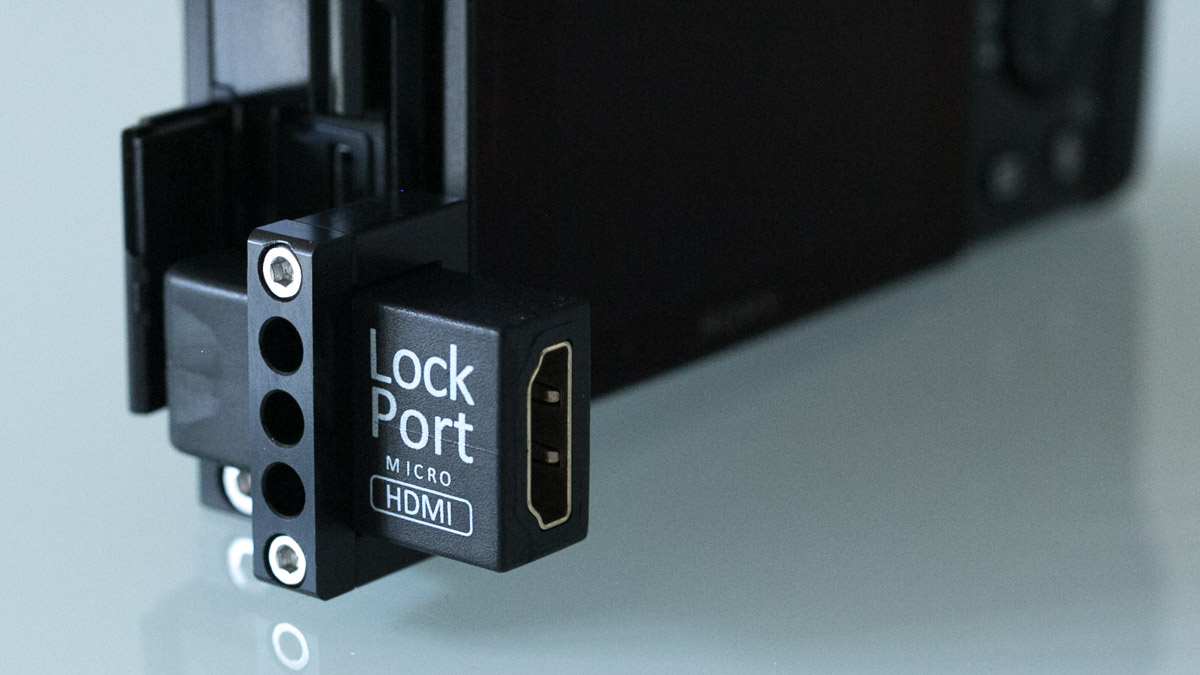 The new Sony A7S is currently the most popular, pocket sized cinema camera, offering unseen lowlight capabilities and dynamic range (A7S reviews here). But like every camera also the Sony A7S has weaknesses, one of them is its fragile micro-hdmi port that is prone to damage and connection loss. The solution: The new Lockport A7 to lock hdmi, just released, here for review. The hdmi port on the Sony A7S is very important. Not only is the signal coming out of it the only way to externally monitor your feed, but it is also how you’ll be able to record 4K extrnally using the Atomos Shogun.

If you’ve worked with these wiggly small ports on DSLR’s before then you know this micro-hdmi port on the A7S is an issue. If it gets worn out loose contact connection losses will follow. On the upper left you can see a micro-hdmi to hdmi adapter plugged into our Sony A7S. We recommend not to use your camera in the field like that, a wrong movement or pull on the cable and the port is broken. Sony provides a stock hdmi locker with the A7S. It attaches to the camera very intelligently and firmly. The only problem is that no micro-hdmi cable can fit inside. We tried 4 cables by different brands. We have no idea what Sony was thinking.

So how can we make sure the micro-hdmi port on our Sony A7S will outlast the release of the Shogun in October?

Let’s take a look at the Lockport A7 The Lockport A7 is another hdmi port locker by LockCircle, an Italian company that has made cable lockers for different cameras and also specialises in transforming photo lenses into cinema lenses. Check out their website www.lockcircle.com The Lockport comes in a small box and breaks down into several pieces that have to be screwed together and onto the camera. It comes with a small instruction manual and all seems elegantly designed. We realized the Lockport requires additional items to fully work. More on that later. Assembling the Lockport is easy, but not straight forward. It took several attempts to get it right. It comes with two allen wrenches, at least one of which is required to take the Lockport back off your camera.

When assembled to the camera (before a baseplate is attached) we realized that the only hold point is the micro-hdmi port itself. This makes the port even more vulnerable, so it’s actually very important that a baseplate is always attached, to make sure the Lockport is secured. When we installed the baseplate we realized that our Sachtler screw wasn’t long enough to catch the thread. A Manfrotto baseplate screw did the trick by a millimeter.

After a baseplate has been successfully attached the Lockport sits very very tightly and surely won’t come off.Locked!

The A7S when used for video desperately needs an hdmi lock. The Lockport A7 provides exactly that. It’s secure and should always stay on the camera.

It transforms your inconvenient micro-hdmi port to a standard hdmi port giving you more cable options in desired lengths.

The only downsides are that:
– putting it on and taking it off requires working on it with at least one of the allen wrenches.
– Requires a baseplate and a longer screw to lock.
– Cable itself is not locked.
– it costs $128.

You will probably also need:

To order a Lockport A7 check out www.lockcircle.com