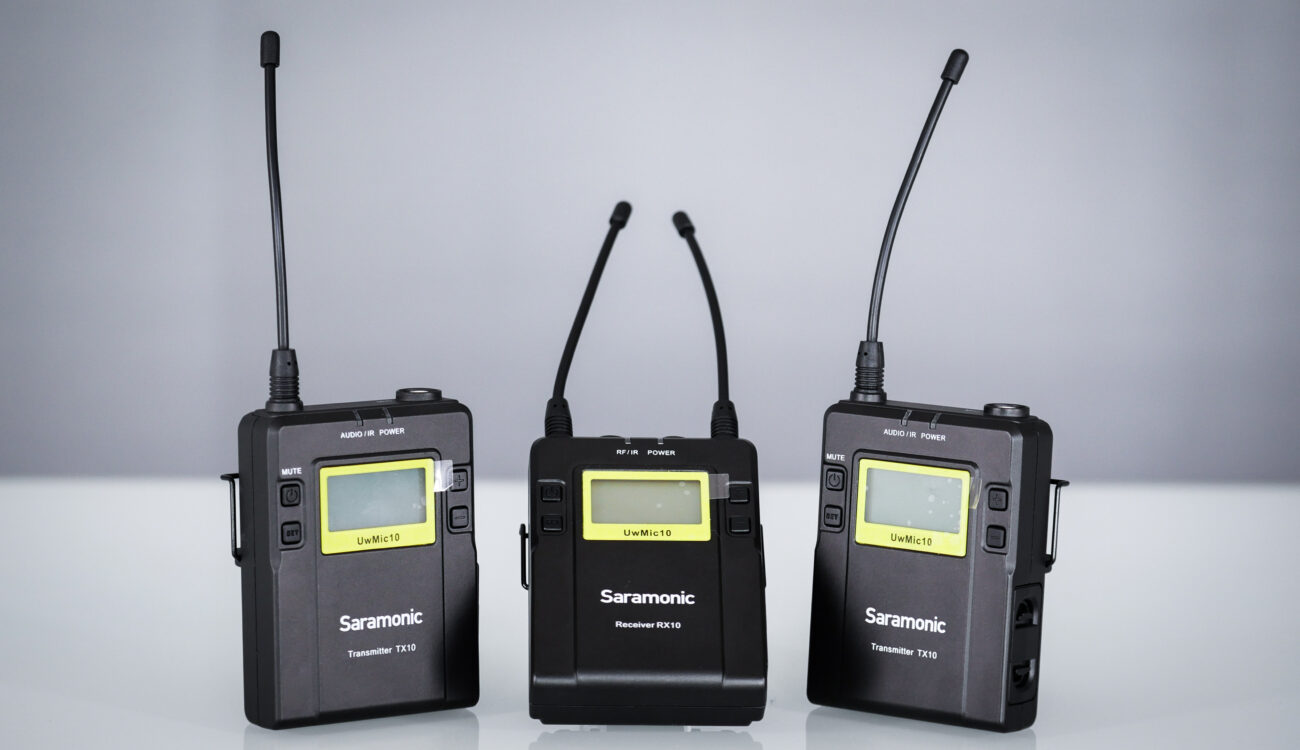 The Saramonic UwMic10 UHF system was introduced a few weeks ago, promising a relatively low-cost dual wireless microphone solution ideal for DSLR shooters. Read on for our initial hands-on impressions.

The Saramonic UwMic10 (Amazon link) is not the first wireless microphone solution from this brand. In fact, I had come across the company name a while ago when researching what the market had to offer at the budget end of the spectrum. At around the $100 mark, their SR-WM4C didn’t have the best reviews out there, only offered VHF and, in general, looked a bit clunky for my taste.

But a couple of months ago, Saramonic released a couple of videos that hinted at a new product: a UHF wireless microphone system based around a dual channel receiver, an ideal solution for DSLR shooters limited to a single 3,5mm mic input on their camera. It also seemed to be priced very affordably at around the $300 mark for the basic kit. Needless to say, when the package arrived in the post a few days ago, I was very curious to see if the final product would deliver.

A first look out of the box revealed a set of two transmitters and a receiver, all very solidly built. Their metal enclosures sure seem like they could take a bit of a beating , and their weight is very reassuring. In fact, they’re just on the edge of being a little TOO heavy: at close to 250g each excluding the necessary 2 AA batteries, they weigh around 100g more than the famous Sennheiser G3 counterparts including batteries.

They are also slightly larger than the Sennheisser, but not as large as, say, the RodeLink system. One downside I found is that the removable battery tray is made entirely of plastic — and not the sturdiest kind — which doesn’t inspire me with confidence. Not only is it another piece of kit to keep track of, but if this small part breaks, then the entire unit goes down.

Setting up the system is very easy indeed. The TX transmitters can be assigned to Group A or B, each consisting of 96 different frequencies. Scrolling through the RX receiver menu reveals a number of general settings, as well as separate identical settings for Group A and B. One of these settings is Auto Scan, which will search for an available and clear frequency in that group. Once it has found one, scroll down to “Match with TX”. Grab the corresponding transmitter for that group and scroll down to “Match with RX”. Place the two near each other and they will sync via infrared transmission. Do the same for the other transmitter and you’re set.

Note that there is also a handheld wireless dynamic microphone, the HU10, which is also part of the UwMic10 wireless system family. Unfortunately, this wasn’t included in the kit. Also, the transmitter is integrated into the microphone, rather than being an independent XLR unit you can use with any mic.

A nice feature is that you can (and should!) turn off an individual frequency group when not in use to save battery. Also, its worth noting that you control audio levels only through the receiver, as opposed to the controls on both transmitter and receiver found on other systems. Levels are displayed as a number scale from 0 to 20, as opposed to a more standardised scale in dB.

What makes this such a handy unit for DSLR is the output mode option. The default Mono mode mixes both microphone signals on output. Stereo mode, however, routes each signal to the left and right channels independently, making sound editing in post a lot easier. This works great with the included stereo minijack cable, and thus for DSLRs… But the included XLR cable that just sums both signals to mono effectively reduces the usability of the product if you’re using a larger camera with XLR inputs. We used some adapters we had lying around the office to split the signal out of the RX into 2 mono RCA signals, and then using XLR adapters on them to plug into the 2 inputs of the camera. This does work, but is a bit of a long workaround for something that could work right out of the box if only the included XLR cable was a splitter instead of a simple adapter!

A quick test out in the street revealed that the Saramonic UwMic10 had a reach of around 70 metres before total dropout, which in my experiment meant a good 7 metres further than the Sennheiser G3. Very nice! Just for the “LOLs”, I also tried the RodeLink system, which cut off at around 55 metres.

Noise levels were acceptable throughout, perhaps just a tad noisier than the Sennheiser but providing more than adequate results. I was very pleasantly surprised.

It is also worth mentioning that since I wanted to keep the experiment as even as possible, I used the microphone included with the Saramonic with all units. This setup worked fine, but when doing further tests back in the office, I found that I would get no input if I tried other lavs with the Saramonic transmitter. If you have a favourite microphone you want to use with this system, it’s definitely a try-before-you-buy kind of situation. The included microphone is absolutely fine, perhaps not of the same cable quality as the Kevlar ones from the RodeLink, but it certainly doesn’t feel cheap by any stretch.

All in all, I was very pleasantly surprised with the Saramonic UwMic10 system. It does have some downsides — such as the slightly flimsy and plasticky battery tray, the lack of a solution that works out of the box if you want to use two XLR channels, and strange mic compatibility — but you definitely get quite a lot for the price. Not only is it a dual receiver system that will cut down on the expense and hassle of working with 2 wireless sources. It is also seems like a well-built product that looks, feels and sounds professional.

At the moment, the product is available on Amazon.com starting at around $300, with prices depending on the exact configuration you choose.

Note: A video review with audio will probably tell you more about the product than a written article. Due to a busy schedule this was not possible at the time, but we will use the Saramonic UwMic10 in one of our upcoming videos so you can check the quality yourselves. Watch this space!