A while ago, I found myself in a nondescript office building in the East of England, attending a press event of what Sachtler’s and Vinten’s mother company Vitec called “a revolution”. That’s quite a statement for something as “boring” as a tripod – but I think it’s fair to say that we all were in for a ride. It was clear from the start that they must have had something good up their sleeve considering all the buzz of the event and the sheer cost of flying everyone out.

And then they revealed it. Yep, the trip was worth it. 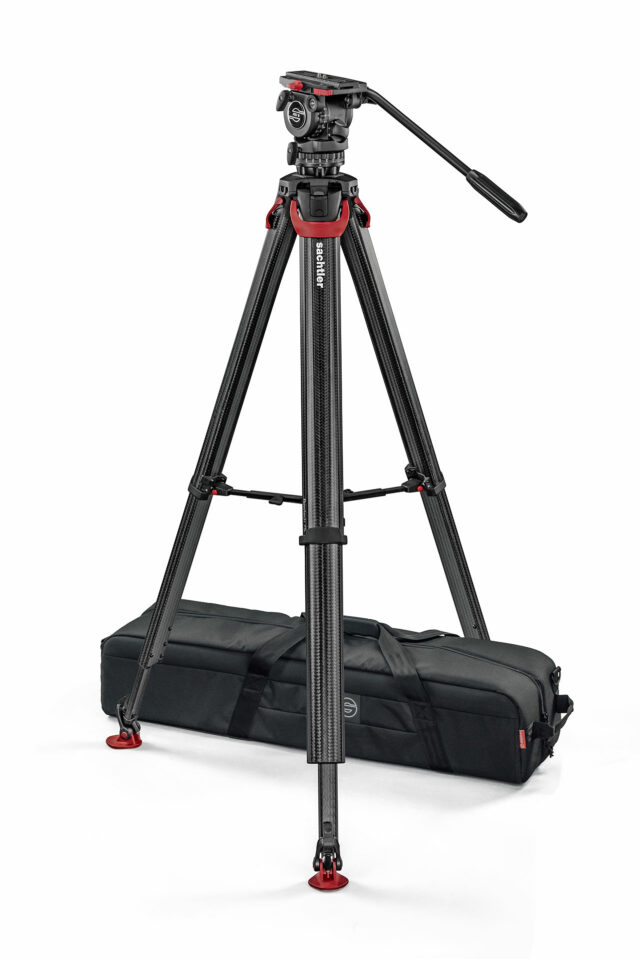 The Sachtler Flowtech 75 tripod (also sold as a Vinten Flowtech 75 version with black instead of red levers on top) is a three-stage tripod that looks very unlike any tripod legs I’ve seen before. The legs are unusually shaped with a very wide profile, doing away with the standard round profile we’ve come to expect from tripods since forever. They are made of carbon fibre and notably feature three quick-deployment levers right next to each other at the top of the legs, situated right around the 75mm bowl, making it easy to open with two hands in one go while holding the tripod head. 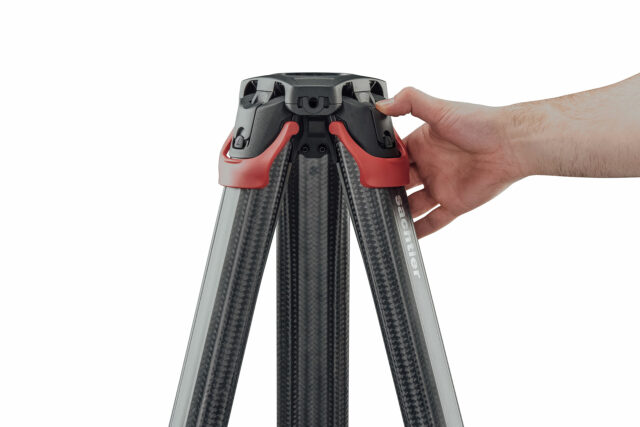 It’s something that really needs no further explanation once you’ve seen it in its brilliance. They still had a whole day of press briefings to fill after the big reveal, but I thought right then and there that it’s great for them that any further explanation was completely unnecessary. Every camera person who ever worked with a camera tripod will understand in an instant how much time the repositioning would save them in everyday scenarios. The speed of deployment is significantly faster with the Flowtech tripods than with anything I’ve seen before, except maybe a monopod.

When removing the (optional) mid or floor spreader, the Flowtech 75 can go as low as 26 cm (10 inches) and as high as 157 cm (60 inches), which is extremely versatile. Similar to the Sachtler or Manfrotto telescopic tripod legs, there are brakes at the top of each leg that allow for adjustment to the different height stages of the tripod.

Because of the shape of the tubes, the tripod has a very solid stand, much better than any standard round-tube tripod. The increased use of carbon fibre material also means that it’s heavier than some other carbon tripods, but at around 3kg for the legs it’s still totally okay to carry around.

The rubber feet are much easier to add and remove than on previous Sachtler tripods. Also, the legs have drainage holes – if water gets into the tripod because, say, you put it in a river (like they did for their demo video), it runs right out again. This also makes it easy to clean with normal water.

The tripod legs stick together magnetically, which makes them very easy to carry. They seemed to have found the ideal resistance for that purpose, so they don’t come apart accidentally.

Another big reason why they flew us out was that Vitec very proudly wanted to show us their own carbon fibre production process. Until now, like all other manufacturers, they bought standard round tubes of carbon fibre for their tripods. For the Flowtech 75, they have made a significant investment and bought their own carbon fibre weaver, a huge Stargate-looking machine that weaves the individual strings of fibre automatically into its unusual-looking shape. This manufacturing process and the shape of the sections truly makes the entire tripod much more stable and rigid than others. 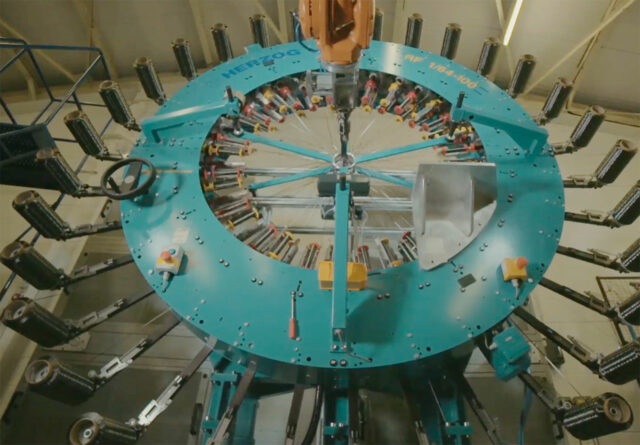 It was fascinating to see the machine in action, and how a soft “sock” weave comes out of it at the end. Using epoxy resin and other processes, the fibre is hardened and made into the individual stages of the tripod which are consequently put together. It’s also nice to see that by investing into their UK plant, they don’t ship off more production to the Far East or elsewhere, but really add some rare manufacturing jobs back in Europe.

The Sachtler / Vinten Flowtech 75 tripod indeed is a mini revolution in a field where everyone thought that everything had already been done. I can’t wait to try it out in practice, but the demonstration surely left me convinced that the time savings alone on a normal shooting day will be significant, which is mainly due to the repositioning of the quick release levers. The shape of the profile makes so much sense for the improved stiffness of the tripod as well. Time will tell how people will like this new tripod, but I think it’s almost guaranteed that they have a winner on their hands with this one.

Full disclosure: Vitec Videocom paid transport and accommodation for a one-day roundtrip to this press event together with other media to their Bury St. Edmonds site in the UK to show me their new tripod. There was no other payment involved whatsoever. I personally worked for the Sachtler brand many years ago explaining their products in videos, but there has been no  compensation for this press trip other than the flight and accommodation cost.