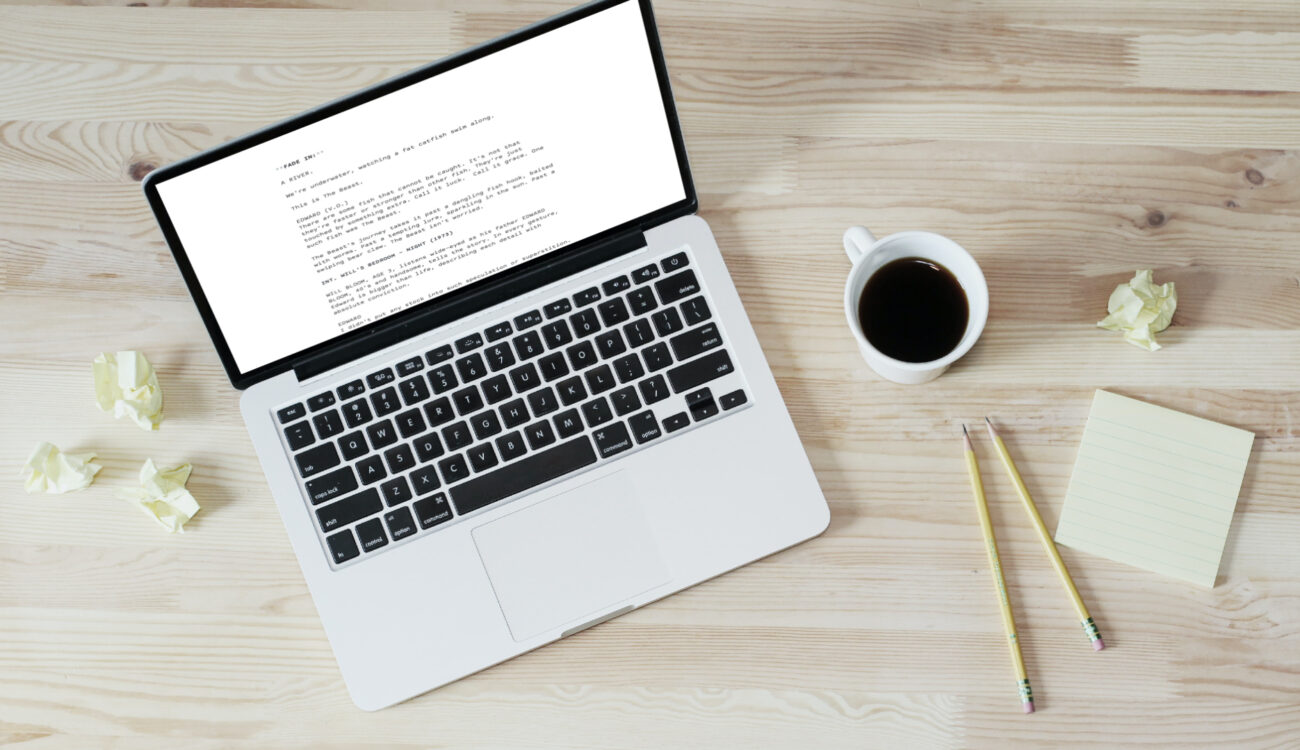 One of the hardest things a screenwriter ever has to do is sit down and write. Be it Imposter Syndrome, cumbersome outlines, lack of self-belief, or complicated writing applications, many things can get in the way of getting pages done for the day. There is a myriad of screenwriting software packages that can not only help you streamline your writing process but also your production. Let’s see what the nerds (aka software developers) have in store for writers.

Just like with camera technology, screenwriting software has had a boon in the last decade or so. Whatever needs a writer or production may have, an application was created or evolved a feature to fill it. Unfortunately, this has created a fairly saturated market that may put off creatives in search of the right tool.

Eric Roth (IMDb), writer of Forrest Gump and The Curious Case Of Benjamin Button, still works on a defunct piece of software that runs on MS-DOS. For all the writers wary of wading into the pool of screenwriting software, CineD is here to help.

Final Draft and Fade In have been around for ages. The former a decade longer than the latter. According to Final Draft’s homepage, their software is used by 95% of film and television productions. Meanwhile, Fade In states they are the New Industry Standard.

But are they really that great once you get passed the marketing hype?

The newest version, Final Draft 12, comes with an enhanced beat board, a newly updated outline editor, and a notation feature to get you started. There is a lot more in the toolkit once you go digging. For $249.99 brand new, or $99 to upgrade from a previous version, writers are definitely playing for a fully-featured software package to get them started.

Fade In, however, costs $79.95 but boasts an equally impressive list of features. Real-time collaboration capabilities, organization and navigation tools, and industry-standard script breakdowns and production reports.

Mac and Windows are supported by Final Draft and Fade In, while the latter also supports Linux! Each application can open different format types, including .fdx files from Final Draft.

Both of these screenwriting software packages are robust and get the job done. There’s a reason they have been around for so long. Final Draft also has the Big Break Screenwriting Contest. While it doesn’t force you to use their software, it’s an amazing way for Final Draft to help writers looking for their big break. For an individual writer who may not need all the bells and whistles, a lot of these tools may be a distraction. They will help support your production better than streamlined applications, but may also get in the way of your creative process.

As competitors to Final Draft and Fade In, these two screenwriting software packages have had to take a different approach. Both CeltX and WriterDuet run on a subscription model, with the latter being a browser-based application. CeltX was once a desktop application but has evolved into a cloud-based service.

CeltX has shifted its focus over the last couple of iterations and promotes the use of its software for video and game production, as well as screenwriting. The Game&VR Production plan includes features such as interactive story maps and dialogue, narrative reports, branching storylines, and in-line asset tracking. While the Video Production model has options for breakdowns, shot lists, budgeting, scheduling, and call sheets.

On the other hand, WriterDuet began as a browser-based writing application focusing on collaboration. This new cloud-based approach allows writers to pull up their scripts on any device that can run a browser. Heck, if your fridge has Chrome, you can probably write a script on it with WriterDuet. While it’s missing some of the many features of CeltX or even Final Draft, WriterDuet promises to streamline creativity so that your story gets on the page.

CeltX and WriterDuet have very robust subscriptions models. Whatever your need is, there’s a price bracket for it. But that means you’ll be paying every month or year for the opportunity to use each software package. Some brackets do have limits on how many projects you can create, so writers must be extra vigilant when picking one of the other. WriterDuet does have an unlimited free version, but it also limits the amount of work a writer is able to do before paying for a subscription. Both applications can open different format types, including .fdx files from Final Draft.

Like with Final Draft and Fade In, both CeltX and WriterDuet sure have a lot of features that aren’t useful for getting your pages done. They can definitely help with outlining your ideas or supporting your production, but some writers may find these software packages too bloated, or expensive, for daily writing.

Highland is the new kid on the block. Initially created for melt down PDF’s, Highland has evolved into a minimalistic writing software package that can handle any writing you throw at it. It was created by screenwriter and novelist, John August, writer of Charlie and the Chocolate Factory, Big Fish, Aladdin, and the Arlo Finch book series.

Highland 2 isn’t like the screenwriting software packages that we looked at above. It does one thing and it does it well. It lets you write. Writers aren’t bogged down by a massive feature list that can at times be distracting or useless to writers. Formatting options get out of your way, allowing creatives to write in plain text. Highland 2 will automatically format everything based on Markdown, a lightweight markup language.

With the Sprint features, writers can set and track writing sessions, which Highland organizes by date, duration, and words added and deleted. A set of templates is also included with Highland to help writers start their script, novel, or university paper. Highland 2 can also open a wide variety of file formats, including .fdx from Final Draft. Finally, a Gender Analysis feature tracks the gender breakdown of speaking parts in your script, which is something Final Draft also added with version 11.

But the best thing about Highland 2? It’s free. You can download it from the Apple Store and get to writing as fast as your computer can download and install it. However, it is limited to the Mac ecosystem, unlike the four applications above, and will put a watermark on your scripts. Thankfully, there is no limit on how many projects you can write.

For writers with a few bucks to throw around, Highland 2 does offer a Pro upgrade for $50. It will remove the watermark and add in extra templates, as well as a Word Analysis and Revision Mode feature.

Writers who are looking for a budget-friendly, MacOS option may find Highland 2 a breath of fresh air. While it won’t help your production with call sheets or your story development with outlines and notecards, Highland 2 won’t stop you from getting your pages done. In fact, it encourages it!

Are you a hipster? Don’t have a Mac or PC? Do you find the strain of starring at a computer screen too much to bear? Or maybe you keep getting distracted by the internet from whatever device you’re using?

Here’s a unique option to get your story on paper. Literally.

Old school typewriters are clunky, loud, and incredibly inefficient to use. But something about the analog workflow and aesthetic can really bring out the creativity in a writer. Much like analog film has a way of connecting photographers with their work, the typewriter bridges the gap between your fingers and the paper.

If you are based in LA and Orange County, The Typewriter Guys will be able to help.

If the above writing applications just don’t work for you, try going old school. You may be surprised at what your fingers can type out when you have to work for every letter. Here’s the aforementioned Eric Roth on that matter (MS-DOS, remember?):

The right tool for the job

Almost every software application above has either presented itself as an industry-standard or used the phrase in their marketing material. But as John August said, the only industry standard for scripts is PDF.

If you have an idea for a movie or book, use whatever tool you want that can spit out your material in a PDF format. You can use Microsoft Word, Notepad, MS-DOS, or even a Typewriter. Although with the latter you may have to scan your pages to make them a PDF.

The screenwriting software packages we discussed are not the only tools on the market for writers. Yet, they are a good range of what is available for every budget. Whichever you choose, it may make your writing workflow easier. Some will even help you with your production needs. But in the end, whatever gets your pen to paper, literally or figuratively, is the right tool for the job.

What are your thoughts on the software applications above? Which ones have you used and which ones do you plan on using? Let us know in the comments.