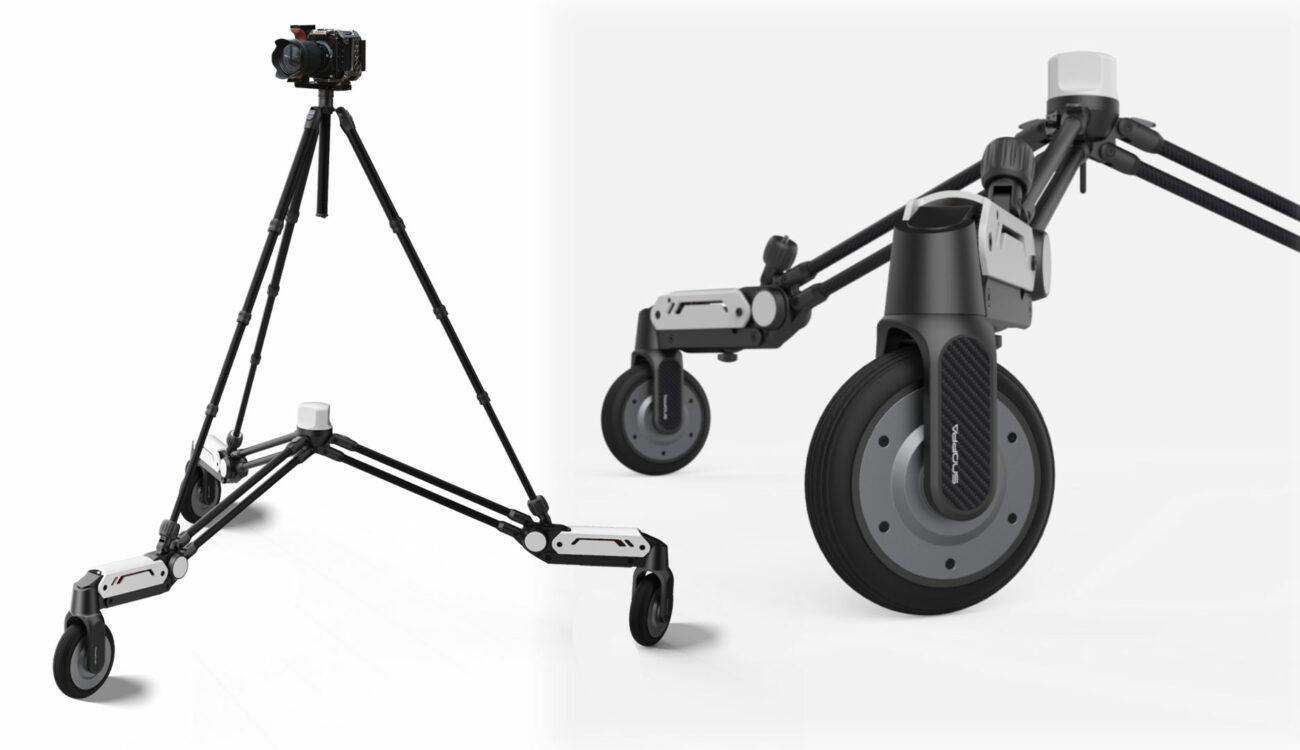 Snoppa Rover is a promising electric tripod prototype that offers both automatic modes and a fully manual remote control mode with camera control and image stabilization. The dampening system in each arm of the spreader promises to ensure smooth movement on uneven surfaces. While the availability of the Snoppa Rover is unknown, the price should be $2,399 at launch.

In case you never heard about the company, Snoppa Tech is a Chinese tech company based in Shenzhen. A brief look on their website reveals that so far they have only created a few products. On top of five different models of gimbals for smartphones, action cams, or cameras – such as the Snoppa Go from 2016 – Snoppa also offers a “DJI-Osmo-Pocket-like” gimbal camera called Snoppa Vmate. Interestingly, the Vmate is being sold on B&H as Benro Vmate so this can be a bit confusing.

The most recent product, although still at a prototype stage, is a bit more interesting device. The Snoppa Rover is promising to be a motorized tripod dolly with a plethora of intelligent features. Let’s take a look at the details.

While the market of handheld gimbals has definitely been over-saturated in the past years, when it comes to motorized tripod dollies the competition is scarce. Some of the features that the Rover promises are even unheard of in such a device as far as I know.

The Snoppa Rover is basically a three-wheeled bottom spreader for a tripod that can drive and stabilize itself on various uneven grounds. It can be operated manually or move automatically along a preset path. The dolly will also be able to remember the path and follow it multiple times if desired.

Every arm of the spreader includes its own active dampening system with a built-in gyroscopic sensor, a Hall sensor, an accelerometer, and a brushless motor connected to the spring. The company claims that the sensors can detect an altitude change of the Rover’s body within 30 nanoseconds and drive the brushless motor to reversely compensate within 50 nanoseconds. This should result in a smooth movement on any surface.

On top of having its own built-in high torque brushless motor for the forward motion, each wheel is also equipped with an independent steering motor, so the dolly can turn 360° on the spot. That also means that the movement and steering can be controlled independently. The wheels including the tires have 210mm (8.3″) in diameter.

The maximum load capacity of the Snoppa Rover is 15kg (33 lbs), so it seems like it will also be able to carry most cinema camera rigs. The weight limit probably also includes the weight of the tripod, so don’t forget that. The width of the spreader can be adjusted for different use cases and speeds. The company further claims that the Snoppa Rover will be able to go as fast as 18.6mph (30km/h), so it should not be a problem to follow even a fast-paced action.

When it comes to movement control, the Rover promises to offer many different modes:

Snoppa Rover also promises to be able to track desired subjects fully automatically with its “Smart Object Tracking”. The Rover will offer remote control via an app, a remote control transmitter, or directly via a specifically designed handle on the tripod. In some scenarios, the dolly will also be able to carry a monopod instead of a tripod.

Snoppa Tech also claims the Rover will be able to control the camera and even provide an image transmission for a fully remote operation via a phone or a tablet. It will offer multiple interfaces for the cameras, such as HDMI and SDI terminals for wireless image preview, USB-C for camera control, and an extension port for universal remote control. The device will run on dual proprietary batteries. When it comes to the materials used, the Snoppa Rover promises to feature carbon fiber rods and aluminum alloy joints, and host shells.

While there are other ways on how to get a fluid motion, such as a Steadicam, traditional dolly, standard gimbal, or a drone, the Snoppa Rover seems like an interesting option for certain scenarios. Provided it delivers on all the promises, of course.

As I mentioned above, the Snoppa Rover is currently only a prototype, so there is no information on when it becomes available. I hope the device does make it to the market as it looks quite cool in my opinion. When it comes to price, Snoppa Tech claims the full retail price will be $3,599, but there will be an exclusive launch day special price offer that will get you one Snoppa Rover unit for $2,399.

You can submit your e-mail address on the Snoppa Rover website so that the company notifies you when the product will launch.

What do you think about the Snoppa Rover? Would you consider using something like this for your productions? Let us know in the comments section underneath the article.