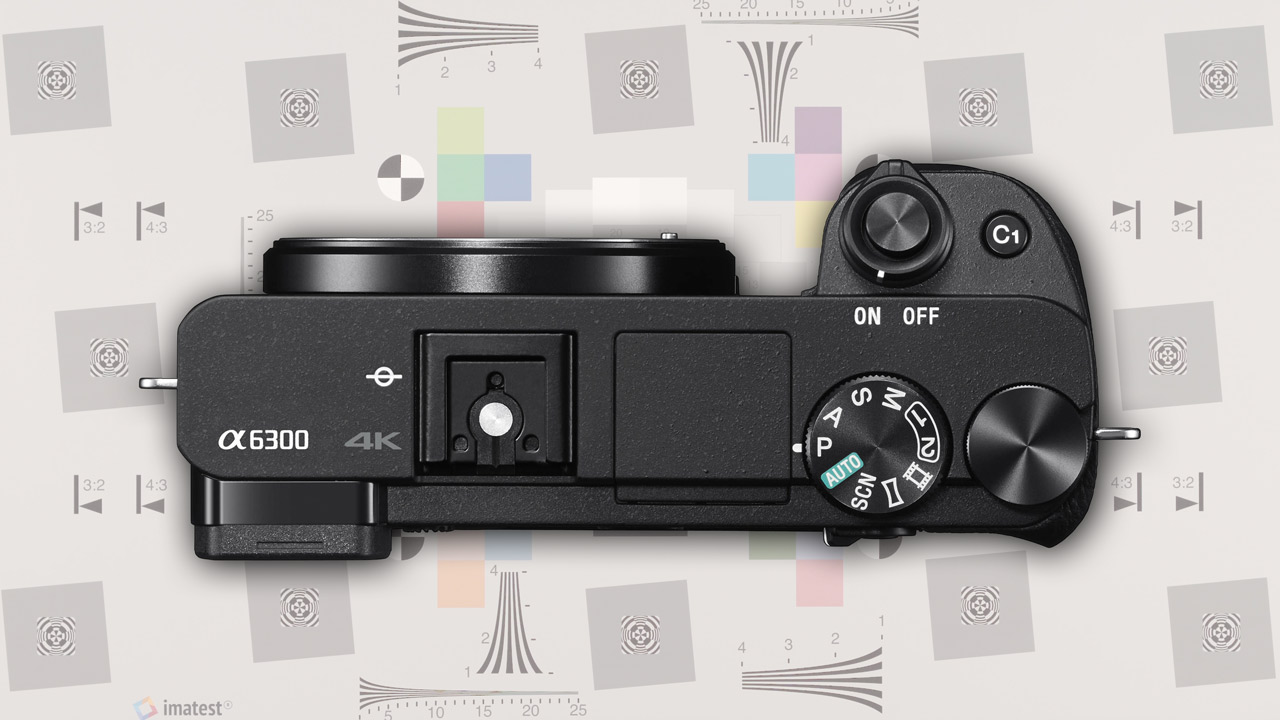 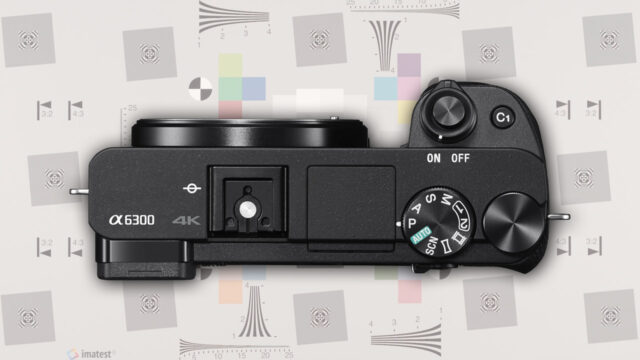 The Sony Alpha a6300 is a new pocket-sized mirrorless camera that has some serious video potential on a budget. Johnnie reviewed the camera a few days ago and earlier today Nino published a lowlight test video.  We’re currently looking at the strengths and weaknesses of the camera in our test lab and have decided to compare the  Sony a6300 vs. Sony a7S II.

For less than $1,000, we definitely weren’t sure what to expect from this camera. For the price range, decent 4K recording and an acceptable low light performance would have been great. However, numerous reviewers—ourselves included—have actually found that the Sony a6300 is performing brilliantly; in fact, it plays in the realm of cameras like the a7S II!

Of course, no camera is without its flaws. That’s why we decided it is time to take a look at what the tradeoffs are when choosing to use the a6300, in an attempt to get an idea of just how good it is. For that, we needed a comparison point. Time for an exclusive a6300 vs. Sony a7S II article!

An often overlooked and a difficult attribute to quantify, I’ve decided to start by looking at the dynamic ranges at play in the a6300 vs. Sony a7S II debate. More often than not, we find that this is where many camera sensors fail to amaze—after all, a good dynamic range rating allows us to capture more shadows and highlights in hgh-contrast scenes.
We’re testing with a DSC labs XYLA-21 transmissive test chart (more on how we test HERE).

Our software measured about 11 stops on the Sony a6300, compared to about 12 stops on the Sony a7S II. Above you can observe the two shots subjectively. 11 stops is a good rating for a camera. Most professional cinema cameras nowadays get between 10-13 stops in our tests.

Additionally, we see that the two cameras have very different noise characteristics. The Sony a6300 was shot at iso 800 (native) and there a stronger base noise than on the very clean A7S II. In this a6300 vs. Sony a7S II test, it is apparent just how clean the A7s II is, giving it the edge over the a6300. [Update:] However, the noise at base ISO on the Sony a6300 is no reason for concern. You should simply know, that you have less room for pushing the dark areas during grading.

Another point to note is that, unlike the A7S II, the Sony a6300 has no difference in dynamic range between S-log2 and S-log3. However, the a6300 uses an 8-bit codec so we’d recommend avoiding S-log3 altogether; use S-log2.

Before we go any further, I have top say that we were very impressed during this stage of the test. So far, the a7S II is the camera which has shown the best low light capabilities of any camera that we have tested—and the Sony a6300 gets surprisingly close!

The shots below are 100% crops from a dark area in our subjective test chart. We can see that both cameras retain detail at high ISOs. While the Sony a6300 is a bit grainy and has some minimal noise reduction artefacts, there is actually very little noise in the traditional sense—especially when the price is taken into consideration!

It seems as though there is intense noise reduction going on in the Sony a6300. Maybe this is how they managed to get such good lowlight results with this camera, even though the super35mm sensor used is much smaller than the Sony a7S II full-frame sensor and should be much more noisy.

When we look at a moving image, the noise reminds me of the results of temporal noise reduction, which can be found in software like DaVinci Resolve. This algorithm calculates the difference in noise between adjacent frames. I’m not saying this is what’s happening here, but lowlight images show a kind of unnaturally slow moving noise, which might be an issue for some. Overall the lowlight behaviour is really impressive on this camera. It gets close to the performance of the Sony a7S II, though at ISO 25600 the Sony a7S II clearly retains more detail than the Sony a6300.

Keep in mind that due to the sensor size you can use a Metabones Speed Booster and a full-frame lens with the Sony a6300 and win another stop in lowlight. This is what Nino did during his Sony a6300 lowlight test. 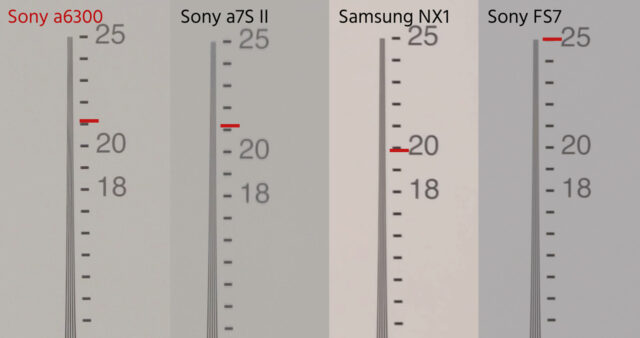 Here is a blown up shot of a tube test chart. On this chart fine lines get closer and closer together. This way we can see when aliasing kicks in or, in other words, when detail can no longer be correctly resolved on the vertical axis. What we see is that the Sony a6300 resolves similar fine detail as the Sony a7S II. The Sony FS7 obviously produces a cleaner image in terms of aliasing but that is to be expected.

What we also noticed in this chart, however, is that the codec compression on the Sony a6300 is much better than on the Sony a7S II which eventually leads to a much cleaner image on the a6300 (look at the number “25” above).

The Sony a7S II image falls apart and doesn’t resolve contrast details very well. Images like the one above look mushy and clouded due to some problem in the compression algorithm of the camera. The Sony a6300 doesn’t have this problem and is the winner in the a6300 vs. Sony a7S II comparison in this regard. 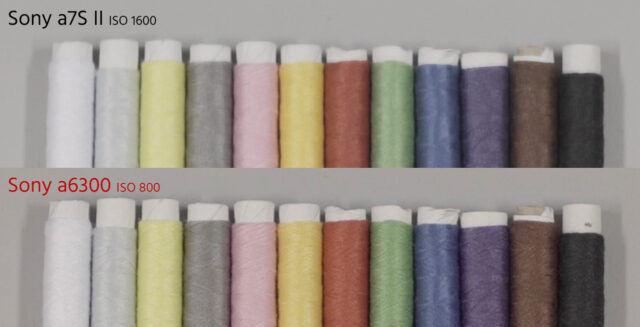 As mentioned in our initial review, unfortunately the rolling shutter effect (also referred to as “jello”) is quite terrible on the Sony a6300. In fact, with a readout speed of about 34 milliseconds from top to bottom, it is the most severe rolling shutter we have ever measured on a camera! Even worse than the Samsung NX1’s 30ms. In comparison, the Sony a7S II has about 25 milliseconds and the Sony FS7 has 14. Less is better. 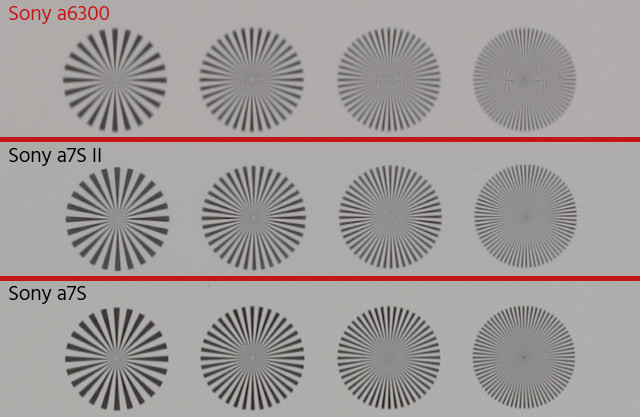 Sadly, this is another point where the Sony a6300 fails. The camera can shoot in full HD resolution, but the image is very soft and dirty in terms of aliasing. The Sony a7S II is much closer to the quality of the original a7S.

The Sony a6300 can shoot slow motion up to 120fps in full HD. A crop of about 80% of the sensor is used in this mode. Unfortunately, the quality is almost identical to the one observed in HD mode at normal recording speeds—and in both modes, low light performance isn’t great. 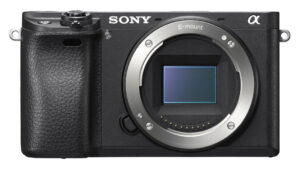 All in all, the Sony a6300 is a truly surprising camera. Who would have thought that a budget camera would perform so well when compared to the quality of the highly recommended Sony A7S II?

When we compare the Sony a6300 vs. Sony a7S II, we see that the latter has slightly better quality in terms of dynamic range and low light capabilities, but the Sony a6300 certainly excels when it comes to fine image details and sharpness.

Only the rolling shutter of this camera is below expectations and the HD quality is, for all intents and purposes, not recommended which makes the camera less suited for broadcast use.

Overall, we’d say: Stay away from this camera if you are looking for a good HD mode and if you do lots of fast handheld shots, as the rolling shutter may become too apparent.

Besides those two points, if you are looking for a camera that shoots great 4K with a quality that matches the Sony a7S II, at a much lower price-point and the form-factor of a small pocket camera, then the a6300 is a great pick. In combination with a Metabones Speed Booster, this is probably the best affordable 4K camera on the market right now—highly recommended!

[UPDATE:] Note that we have not tested NTSC 30p mode. Other testers report that in 30p the camera will crop the image and give you more noise and worse lowlight performance, but better rolling shutter. If you require 30p we recommend you test the camera before you buy.