The Syrp Slingshot is a wirecam setup that adds dynamic motion and expansive length to time-lapses at an affordable cost.

Have you ever wanted to capture longer motion timelapses where a slider track just isn’t long enough? Enter Syrp Slingshot, a wirecam package that can reach distances of up to 300 feet (100m) with up to 3-axis camera movement using the SYRP Genie and Genie Mini.

The SYRP Genie works as the motion control device, moving the carriage along parallel wires of your desired length, whether that’s 25m or 100m. Inter-operable with your camera, the Genie moves the carriage with the time-lapse function to create smooth and unique perspectives that can’t be achieved without the need to spend lots of money. Some of the time-lapse shots in their demo video are incredible! 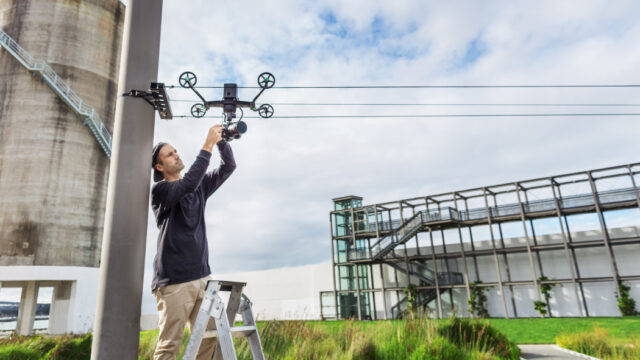 SYRP have designed the Slingshot with simplicity of setup and control in mind, with two mounting brackets, straps, wires, carriage and Genie all fitting into a compact bag.

The maximum payload of 8kg is enough for a weighty camera and lens combo. The example video shows a Canon DSLR and lens weighing around 4kg which should give you an idea. It seems that as the Genie controls the intervalometer for movement, a continual move along the wires might not be possible. However, for time-lapse photography, it certainly goes above and beyond what you can normally capture with a static shot or even short distance movement.

The Syrp Slingshot is available in a number of packages, with the standard ‘Slingshot’ package consisting of – 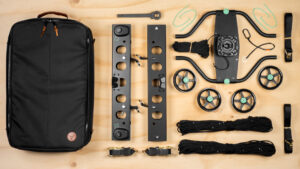 That kit comes in at $989.00, a very affordable package compared to, for example, the Kessler Second Shooter. Of course, you’ll need a SYRP Genie to actually move the carriage, so you can get a bundle with a Genie, the link cable and ball head for $1887. The Slingshot is available now!

Are you looking to shoot expansive time-lapse scenes and need a setup like this? Let us know in the comments!