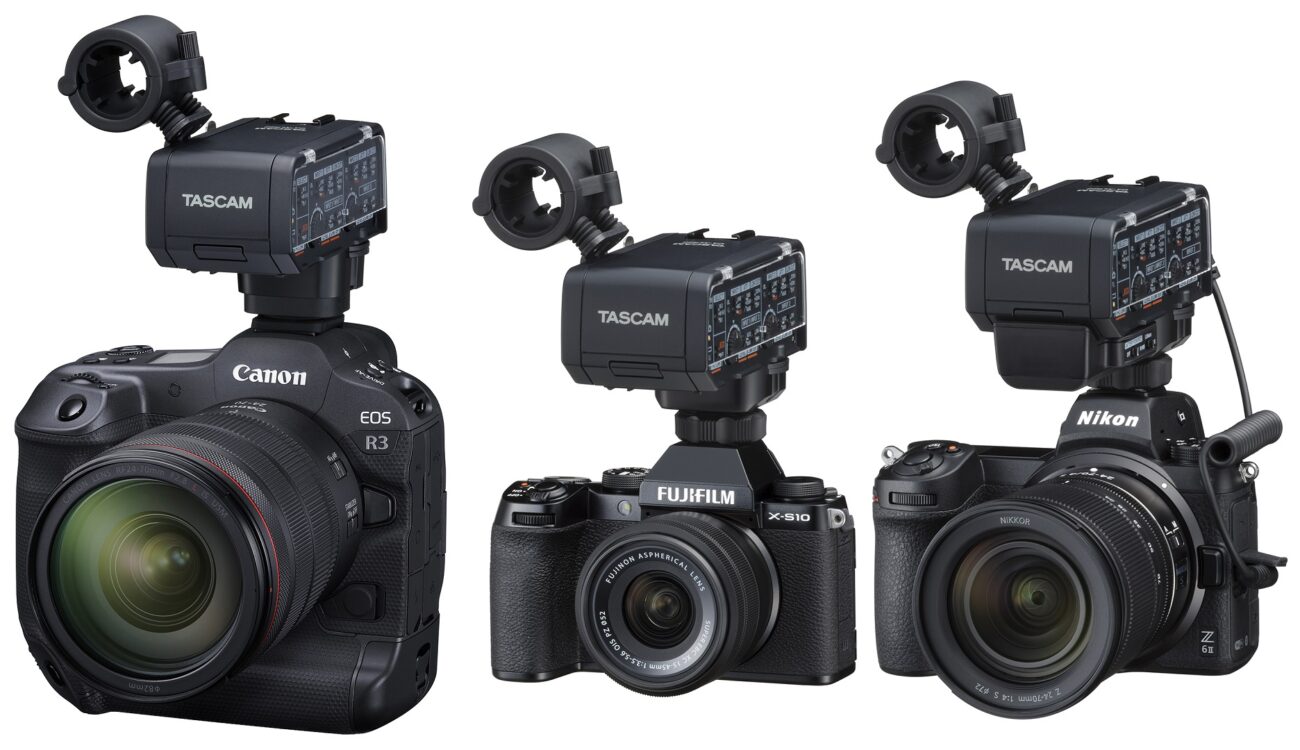 Usually, when I encounter a comparison of video features between real video cameras (production, broadcast, or cinema) and mirrorless cameras, the two main disadvantages of the latter are the lack of internal ND filters and audio interface. While we still have to wait a bit more for the internal ND solutions, the audio interface issue of mirrorless cameras has already been sorted out thanks to hot-shoe-mounted XLR audio adapters.

We have seen similar products from camera manufacturers such as Panasonic or Sony. In fact, I have been using the Panasonic XLR audio unit for years with my LUMIX GH5 and now with my S1 and I absolutely love it. I like having better preamps, two XLR inputs, and all necessary controls available as physical buttons. The upcoming TASCAM Audio XLR Adapter should cover the rest of the Japanese camera manufacturers – it will work with Canon, FUJIFILM, and Nikon mirrorless cameras. Let’s take a look at the details.

The TEAC Corporation, the company behind the TASCAM brand, recently announced the development of the new XLR audio adapter. There are three different models of the XLR Audio Adapter in development:

Both Canon and FUJIFILM cameras feature a digitized accessory hot-shoe, so the built-in high-performance AD converter will enable transferring of digitalized audio directly into cameras without any audio degradation. This also results in a cable-free system as we know it from Panasonic and Sony solutions as the hot-shoe can transfer the audio as well as power the adapter.

For all other cameras – Nikon or older Canon and FUJIFILM cameras – there is the CA-XLR2d-AN version that includes a 2 x AA battery box and cold shoe mount adapter. The XLR audio adapter then works by connecting an analog audio cable between CA-XLR2d’s analog out and the camera’s mic-in. It seems that the analog output with the battery box will be included with all versions. According to TEAC, the adapter will work with Nikon Z 7II, Nikon Z 6II, Nikon Z 7, Nikon Z 6, Nikon Z 5, Nikon Z fc, and the Nikon Z 50. From my understanding, however, it should be compatible with any camera that has a microphone audio input. There are 2 modes on analog output – camera mode for audio transfer to camera’s mic-in or headphone mode for direct headphone monitoring.

As this was only an announcement of development, there is, understandably, no information about the price yet. TEAC, however, stated that the TASCAM CA-XLR2d audio adapter will be released worldwide by the end of 2021. For reference, the Panasonic DMW-XLR1 audio adapter currently costs $398, and the Sony XLR-K3M audio adapter costs $598 (in a kit with a shotgun microphone). I expect the price of the TASCAM solution to roughly match the existing solutions.

Do you internally record audio with your mirrorless camera? Do you use an XLR audio adapter or do you prefer an external audio recorder? What do you think about the TASCAM CA-XLR2d? Let us know in the comments section underneath the article.