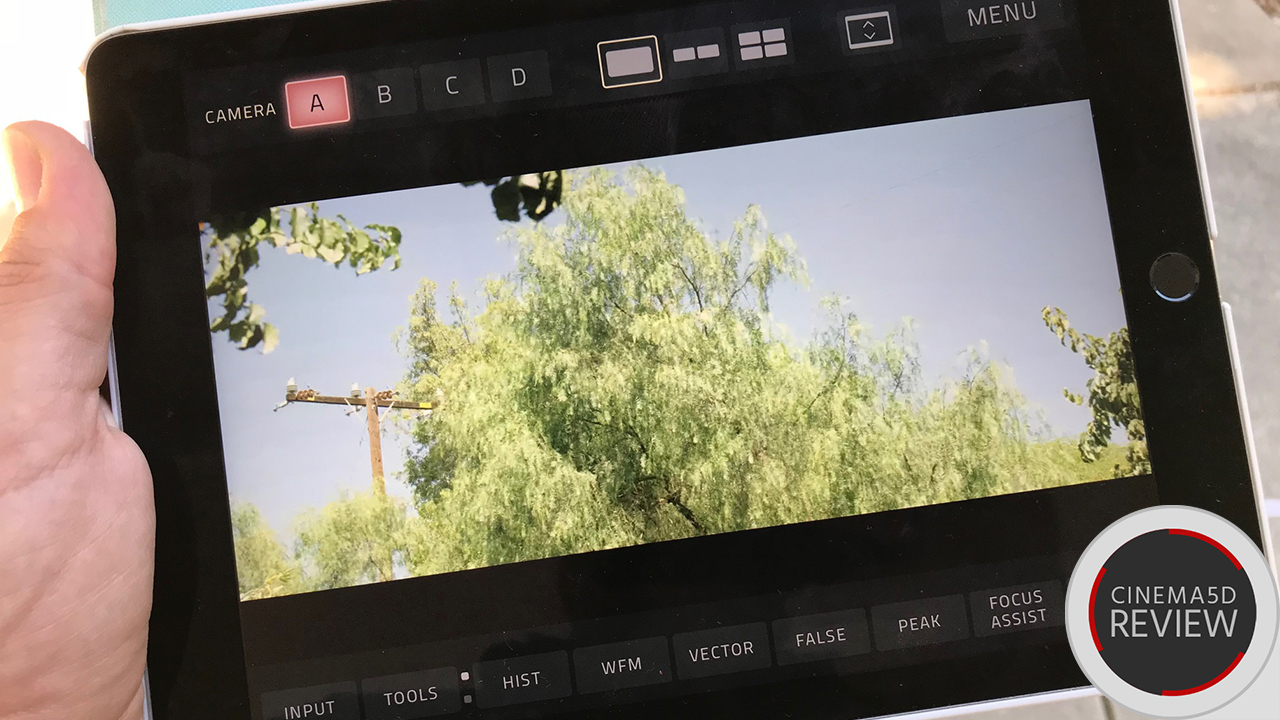 The Teradek Serv Pro can provide a wireless video feed for those in your crew using iOS devices, but is it really as useful as it sounds? Stewart Addison takes a look. 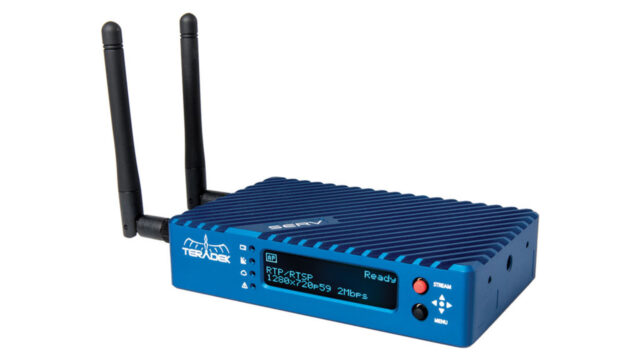 The Teradek Serv Pro – the first device of its kind – allows you to stream a HDMI/3G-SDI 1080p video feed over Wi-Fi (2.4/5 GHz) to ten different iOS devices via the Teradek VUER app (not available on Android). I got to play with one for a few hours and, while I ultimately appreciate the vast number of features Teradek has included with the Serv Pro, I also have some reservations about its actual usability on set. 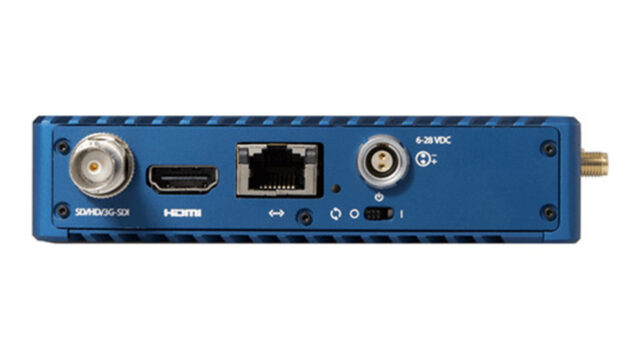 As with everything Teradek, the build quality is very good. With blue anodized aluminium that feels super-sturdy, this is the best-built Teradek body I’ve come across. It feels really solid. The ports on the back allow you to stream your camera outputs – HDMI, 3G-SDI at 1080p over a Wi-Fi connection or LAN if you don’t want to work wirelessly – and it uses a regular 2-pin Lemo connector for power. The Teradek Serv Pro didn’t get as hot as other Teradek products I’ve used, only becoming somewhat warm after the few hours. 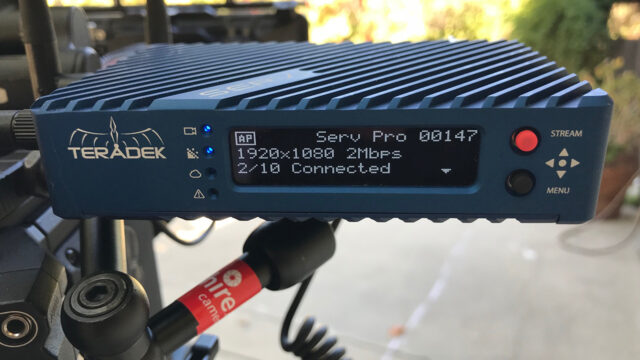 The Teradek Serv Pro has two operational modes: if you’re in the studio and have your own Wi-Fi network, you could connect to it and everything would be on the same network. If you’re out on location, the Teradek Serv Pro can create its own Wi-Fi access point for all of the iOS devices to connect to. Obviously, it doesn’t provide an internet connection, just a Wi-Fi network. 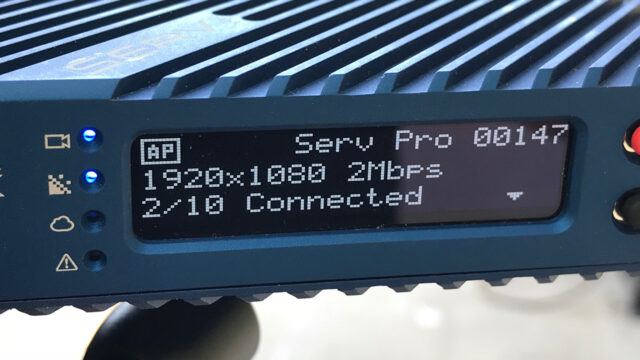 The Serv Pro facilitates ten iOS connections, but for this review I was only able to test it with two, my iPad Pro and iPhone 7 Plus. Finding out how many devices are connected is as easy as scrolling through with the small button next to the screen. You can’t connect Android devices, PC or Mac computers, or browsers to the Serv Pro feed, which feels a bit limiting in 2017. More details on that later.

The tools and options in the Teradek Serv Pro VUER app, however, are comprehensive. You can apply looks, focus assist, peaking, false colour, vectors, scopes, waveform monitor, histogram and frame guides to your image. You can also grab stills and magnify specific areas on the image, the latter of which is helpful to anyone viewing on a small iPhone screen. 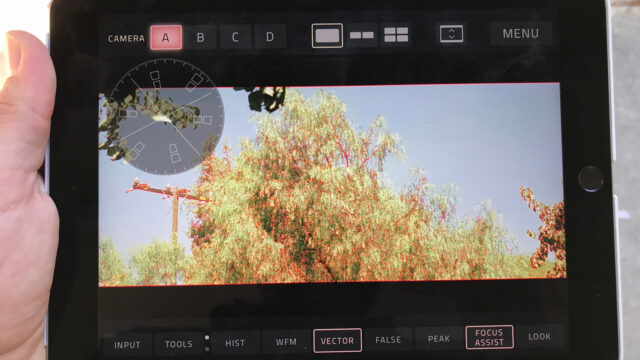 Moreover, the VUER app also allows you to easily view up to four devices or feeds simultaneously. I wasn’t able to test this feature out as I only had one Serv Pro to connect to my camera, but navigating through the options was very easy.

The Wi-Fi technology used in the Serv Pro is 2.4/5 GHz which should offer good range, but when I was testing my demo Serv Pro the image started to become laggy and degrade at around 50 feet, and I totally lost my connection to a “Loading” screen a couple of times. Naturally, the connection was stronger when I had a line of sight to the camera, but having problems at 50 feet certainly wasn’t encouraging, especially when compared to the distance and feed you get out of the more robust Teradek Bolt Pro. Hopefully the performance will improve with a future firmware update, as mine was a brand-new pre-release version of the product. UPDATE: Please see the bottom of this article for my more recent experience with the product. 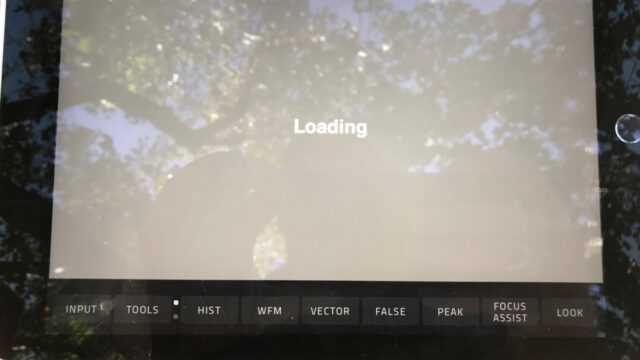 The Serv Pro will set you back around $1,800. It’s not insignificant, especially for multi-cam shoots that would require an additional Serv Pro for each camera. However, being able to connect ten devices to one feed does cut down the cost of extra monitors on set. In single-camera environments, the Serv Pro pays for itself pretty quickly.

Let’s Get Back to the iOS Thing 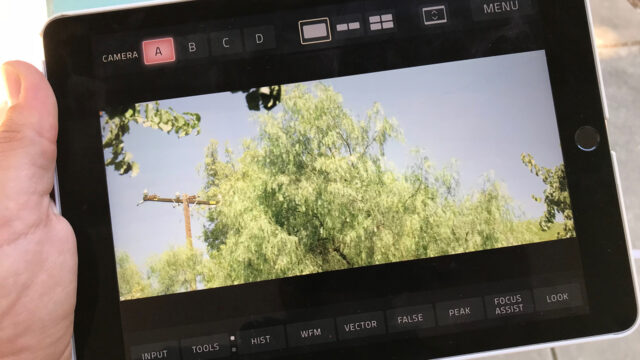 If the USP of the Serv Pro is to connect many accessible devices to one Wi-Fi feed, why then limit the kinds of devices that can be used? Yes, modern iPads and iPhones have excellent image quality with wide colour gamut displays that are both consistent and accurate, but if you want to use the Serv Pro, you now have to make sure you have access to enough iOS devices to make the Serv Pro cost effective to buy or rent. Adding support for Android devices would be the obvious win here, but I have no idea if that will be a future feature.

Everybody having their own iPhones on set isn’t going to be sufficient. I could barely see my iPad Pro image out in the sun as the Apple screens are very glossy and reflective, and that’s not going to get any better on different and smaller iOS devices. Neither is battery life, meaning you will eventually have to tether these devices to an AC charging outlet on full 12-hour shoot days and, as we know, getting your iPhone through a full day without running out of battery isn’t easy with even moderate use. If you then factor in running live video streaming on full brightness, managing iOS devices and battery levels will become an additional challenge.

Also, (See the bottom of the post for the latest on this). The additional battery consumption and a lack of access to regular email or iMessage data will no doubt put off many of the people who will want access to the video feed from wanting to use their own iOS devices. Just try telling a client, producer, or executive that they can’t check their email on set once connected to the Serv Pro’s Wi-Fi. In other words, unless you have extra iPads hanging around, you’re probably going to have to rent or buy additional dedicated iOS devices to get the most out of this already costly investment.

Not to pile on here, but these devices are typically banned on a lot of film sets. Almost all of the sets I work on have a zero-tolerance policy on using phones on set due to social media leaks and unauthorized behind-the-scenes. Having to manage a set where some devices are OK but others aren’t could be tricky, and is it even worth the overhead to get a few more iPads in on the action? I’m not sure. It will suit smaller indie productions more, where crew already have access to their own iPads and can use them instead of buying/renting production and director’s monitors. Powering them for 12 hours on full brightness could still be an issue, though. 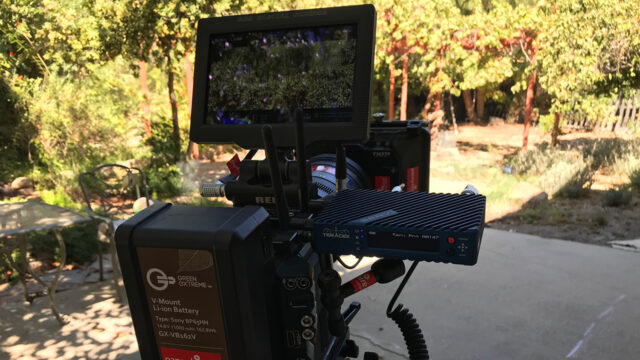 The Serv Pro sounds very useful in theory, but I worry about the cost/benefit of actually using it on set. For single-camera and indie productions with access to some sort of charging station, the Serv Pro is a great way to give everyone a look-in at the action. In other situations, though, the Teradek Serv Pro looks like it could possibly complicate more things than it streamlines.

I went out to a completely different location (nearby field) with the Serv Pro for a second bout of testing and I had a much-improved experience. The wireless range was greatly improved (to about 250 feet) and the connection was strong throughout. I’m not sure what caused my laggy first experience, but I had no issues the second time around. In fact, I tried the device with a larger third-party antenna and found the included ServPro antenna matched its performance quite nicely.

I would also like to issue a correction: using the ServPro over WiFi will not hinder the cellular connection, so you can use the VUER app and receive calls/LTE data without any issue.

Also, here are some points provided by Teradek on the Serv Pro:

We are planning on porting VUER to Android and desktops in the future, but we do not have an ETA just yet. With regard to security of these wireless streams, we offer in-app encryption that only allows those with the stream password to access the live video footage. We will be introducing watermarks in the near future as well. Finally, regarding wireless performance, just like our Bolt products, users need to keep interference in mind when operating the device. Utilizing a wireless access point with Serv Pro greatly enhances range and performance, while also making it easier to switch wireless channels and bands (2.4/5) to avoid interference from other systems.

What do you think? Could the Teradek Serv Pro be a powerful tool or more of a headache in your kind of productions? Let us know your thoughts in the comments below.