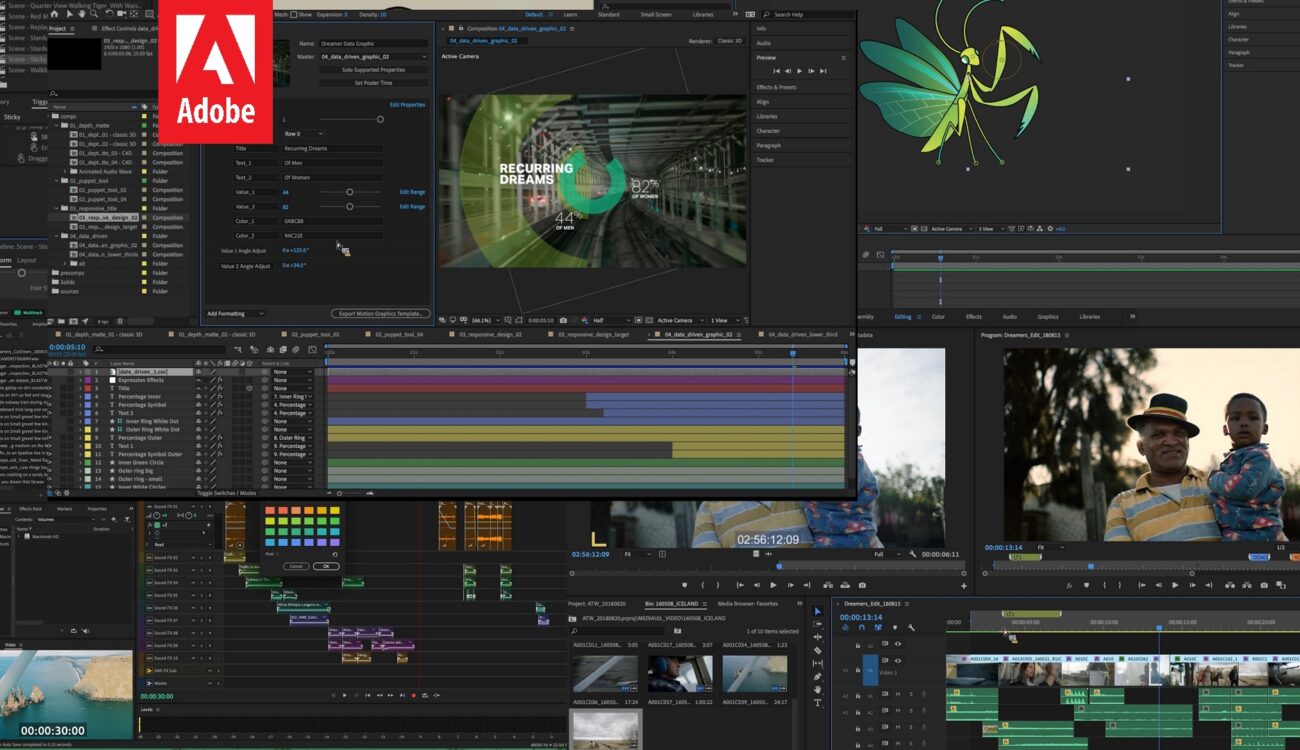 Adobe presented innovations to their applications portfolio, which they will showcase during this year’s IBC conference. The innovations include Adobe Creative Cloud Premiere Pro, After Effects, Audition and Character animator. We monitored Adobe’s virtual conference on 28th August to bring you more information about the updates. 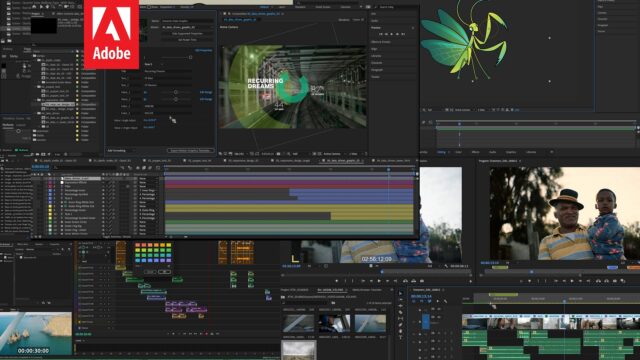 The IBC 2018 conference in Amsterdam starts tomorrow and Adobe has already announced the news and innovations connected to their products. The updates to the Adobe Creative Cloud include for instance Adobe Sensei-powered animation, intelligent audio cleanup tools, selective color grading, advanced data-driven motion graphics templates and end-to-end VR 180 support. The aim ot the new features is to make many common repetitive editing tasks faster and easier so that filmmakers spend more time on the creative part of the editing process.

These updates follow Adobe’s recent unveil of Project Rush, which is the first all-in-one cross-device video editing app designed specifically for online content creators (cinema5D news post here). Project Rush delivers a streamlined and intuitive user experience that makes creating and sharing online content easier by harnessing the power of Premiere Pro and After Effects. Project Rush projects are seamlessly opened in Premiere Pro. The project is currently in beta and should be available later this year.

Premiere Pro and After Effects Updates

Motion graphics workflows – Motion Graphics templates provide a comprehensive toolset in combining graphics with efficient customization in editorial. The templates encapsulate complex After Effects projects into single files with simplified controls for use in Premiere Pro. Workflow with the use of Dynamic Link eliminate any need for intermediate rendering between applications which speeds up production and keeps the project editable at any stage of the pipeline.

New authoring tools in After Effects streamline production in Premiere Pro with parameter grouping to organize the template and order the workflow for editors.

It is now also possible to drag and drop spreadsheet files to motion graphics templates to generate visual representations of information within video projects using data-driven infographics in Premiere Pro.

Intelligent audio cleanup – It is now possible to remove background noise or reverb with new Reduce Noise and Reduce Reverb sliders in the Essential Sound panel in Premiere Pro.

Updated color grading tools – New Selective Color Grading tools in Premiere Pro and After Effects makes the curve adjustments easier and more precise. Expanding on the Hue Saturation “donut” Selective Color Grading offers more tools with higher precision by pairing values, such as Hue vs Hue and Luma vs Saturation, on two axes that show exactly how much any parameter can be adjusted.

End-to-end VR 180 – New support features were added for 180-degree video in Premiere Pro and After Effects, including optimized ingest, effects and output in Google VR 180 for viewing on YouTube or other platforms.

Faster animation and compositing with more control – Advanced Puppet pins for Mesh Sculpting improve the animations. Advanced pins allow users to define the position, scale, and rotation of the pin giving significant control over how the Puppet effect mesh deforms around that pin. Using Bend pins helps to create organic movements within a design, such as a breathing chest or a wagging tail. 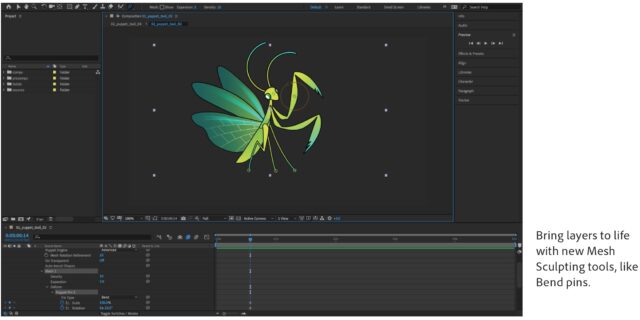 Improved power and performance – both Premiere Pro and After Effects bring new performance improvements, support for new hardware and codecs. 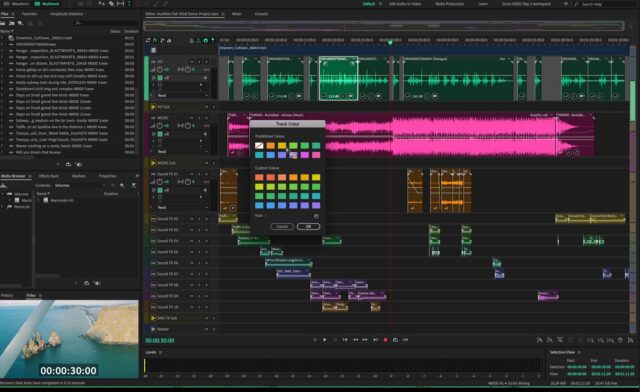 New animator features – For instance the Replays feature can repeat the action to fine-tune other parameters like facial expression etc. Magnets allow puppets to throw, drop, and pick up items. Squashiness Parameter in Physics allows characters and objects in scenes to behave more like traditional cartoon animations. 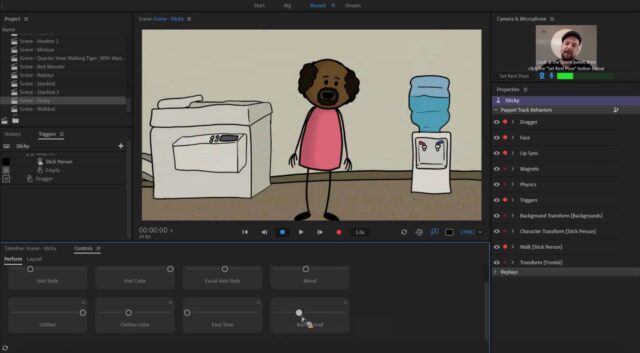 Adobe Stock and Other Updates

The Adobe Stock has an updated search filters – users can look for footage based on frame rate and/or duration. Stock includes millions of curated, contemporary 4K and HD cinematic footage and professionally-designed Motion Graphics templates and is accessible right from the Essential Graphics panel in Premiere Pro and After Effects.

Team projects for collaboration – Integrate the team and workflow with Team Projects in Adobe Premiere Pro, After Effects, and Adobe Media Encoder. Team Projects makes it easy to compare versions and combine edits inside a team. Improved invitations workflow include inviting collaborators to a team project using groups synced from the organization’s directory.

Attendees at this year’s IBC conference can get a closer look at the newly revealed features and hear from industry experts at the Adobe booth (#7.B35, Hall 7, RAI Amsterdam) and at over 100 partner booths from September 13 – 18. There is alo a possibility to tune-in to a Facebook Live with Jason Levine on September 13 at 9 am PT to hear about the upcoming release.

Do you use Adobe’s software? How are you satisfied with it? Does any of the new features especially appeal to you? Let us know in the comments below.