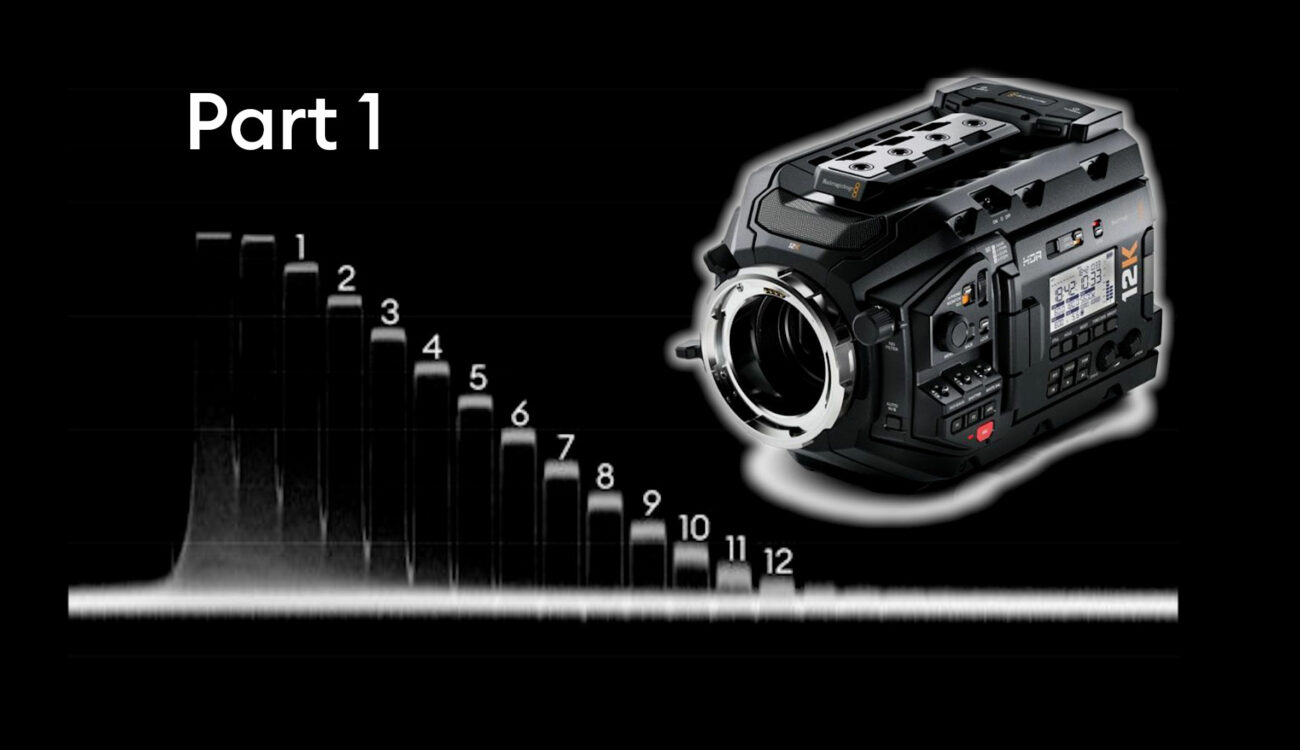 We highly anticipated having the new URSA Mini Pro 12K in our test lab – as this camera with its unique sensor design is doing a lot of things differently to what we have seen from other camera manufacturers. Interested in our results? Then keep on reading …

Time and again Blackmagic impresses with innovations in the camera and postproduction sector. I have to confess, my love with Blackmagic products started when I purchased the original Blackmagic Pocket Cinema Camera ( BMPCC) in 2013. Until today, I still use it for family videos – there is a special organic quality to the Full HD footage, which is hard to describe – I just love it, and it has never let me down. For the past 8 years it has travelled with me to the US, Southern Europe, Japan, Korea and other parts of Asia. The list of trips is endless….

I was very sceptical about higher resolutions than Full HD (1920×1080) – the internal 8 bit 4K of the Sony a7S II, that I had in the meantime, was really nice but I sold it in 2018 as I wasn’t too happy with the colors. Then in late 2019 I added a BMPCC6K to my inventory – simply because I wanted to shoot on a native Super 35 sensor without the need for using a speedbooster, and on top, internal downsampled Full HD (from the 6K sensor) ProRes HQ mode was a key feature for me.

And here comes another confession: yes, the downsampled Full HD from the BMPCCC6K looks superb, but nevertheless I now only shoot 6K BRAW on this camera. The option to crop in post in conjunction with a fast and efficient internal RAW codec, plus the great integration in post with the free DaVinci Resolve Studio version, that comes along with it, just ticks all the boxes for me.

And now, I have a 12K camera from Blackmagic in my hands. 12K? This is about 38 times the resolution of my trusty original BMPCC. Wow. Worth to take a closer look.

And because there is a lot to write about the lab results, I decided to divide my review into two parts. In part 1 I will walk you through the rolling shutter and dynamic range results, in part 2 I will present the latitude results (over- and underexposing).

A lot has been written about the specs of the URSA Mini Pro 12K here, we interviewed Craig from Blackmagic Design here and wrote about various firmware updates more recently here and here.

All the shots in this test were using 5:1 compression ratio, the camera firmware at the time of testing was 7.0.

Lens – now which lens will resolve this super high resolution? Difficult question, but I settled on our trusted ZEISS Compact Prime CP.2 50mm T2.1 Macro – one of the sharpest lenses I know.

Post-production – the camera shoots in Blackmagic RAW only (BRAW), hence DaVinci Resolve is our tool of choice for the analysis (Version 17.1 public Beta 8). Here are the settings in the RAW tab (for dynamic range export of TIFF’s the saturation and contrast settings were left at “1”):

Depending on your computer setup and your timeline resolution, working with the massive 12K files (again, 80 megapixel per frame!) in Resolve can be challenging. I initially tried it on my older laptop which features an NVIDIA GTX980 card with 8GB of VRAM, but very quickly on a 4K timeline the error message “Your GPU memory is full” appeared – in Full HD it was possible to work with the files.

Hence, we invested in new computer and components (AMD Ryzen 3900X, 32GB RAM) and were lucky enough to have NVIDIA give us their GeForce RTX 3090 which features 24GB of VRAM on a loan – thank you NVIDIA!

Increasing the timeline resolution to 8K DCI, the playback drops to 15 fps, but GPU load is only at 38%, memory used is at 13GB – obviously something else in my setup is choking playback (“limited by total power limit” is listed as the performance cap reason of the GPU). If noise reduction is added (like above), playback drops to 7 fps, GPU load increases to around 80% as well as memory usage to 16GB.

Finally, on a 12K timeline, I get about 7 fps, at 38% GPU load with a memory usage around 18GB. As a performance cap reason, “limited by reliability voltage, operating voltage” is shown for the GPU. Adding noise reduction like above pushes GPU load to around 90%, fps drops to around 3 – 4 (memory usage increases to 20GB). Not that I would ever need a 12K timeline, but for exports of TIFF’s into IMATEST for the dynamic range analysis I wanted to have the native sensor resolution.

In summary: The RTX 3090 GPU allows to work with the native 12K files for all possible resolutions, the memory of 24GB is very much sufficient but playback drops depending on your timeline resolution. On a 4K DCI timeline playback is superb, even if noise reduction is added – and that is super impressive!

This sensor which uses a proprietary array of 6×6 pixels with an equal amount of red, green and blue including white (clear) pixels (see Blackmagic’s patent here) is designed to be read out in different resolutions and sensor areas.

And that is precisely the case, for 12K the rolling shutter is 15.7 ms:

In 8K, the rolling shutter drops significantly to 7.8 ms:

This is a superb value, allowing for 8K120 fps recording. In 4K full sensor read out, the rolling shutter stays the same 7.8 ms.

As mentioned above, the sensor was designed to record various resolutions for full sensor readout. Hence, I was curious to see if the 12K, 8K or 4K full sensor recording modes would show the same dynamic range, or if some in camera downsampling would occur – this typically reduces the noise and therefore leads to higher values at a signal to noise ratio of 2 and 1.

If that were the case, one could omit the higher resolution modes and record at lower resolutions for a clean, nicely downsampled image.

The Blackmagic Pocket Cinema Camera 6K for example is doing the downsampling in camera (e.g. if Full HD is downsampled from the full sensor area & resolution).

In short, this is not the case with the URSA Mini Pro 12K as can be seen below. Therefore, it is very beneficial to record at maximum resolution and later downsample to your desired resolution in post-production.

If you are not familiar how we test dynamic range, please head over here.

Shooting in 12K on the URSA Mini Pro 12K

In general, the generation 5 color science in combination with the BMD film log curve clips already around 75% IRE – for this reason, highlights in general look more pleasing as the brightness of clipped parts in the image is lower.

As usual, BRAW allows highlight recovery in post, which typically extends your reach into the highlights by around 1.5 stops as clipped color channels are reconstructed by the recovery algorithm. For our standard measurement of dynamic range we do not consider this highlight recovery option, as it can result in some weird color shifts – we will come back to this in our latitude tests. As a consequence, we do not count those stops, but be aware it can be a great option to recover a blown out sky – although color accuracy will suffer.

A waveform plot of the Xyla 21 chart shooting in 12K, ISO800 reveals about 12 stops above the noise floor (note – this is the waveform in a 12K timeline):

As can be seen, a rather solid 13th and faint 14th stop plus a hair of a 15th stop are visible inside the noise floor. This is confirmed by IMATEST, which gives 11.8 stops of dynamic range at a signal to noise ratio of 2 (SNR), and 12.8 stops at SNR = 1. In the middle graph below, above the blue (Low) curve to the left additional stops are identified. Patch range is given at 16.6 stops.

Shooting in 8K on the URSA Mini Pro 12K

Shooting in 4K on the URSA Mini Pro 12K

The image becomes noisier, as can be seen looking at the waveform plot of the Xyla 21 chart, shot in 4K resolution (waveform from a 4K timeline) – here the 13th stop inside the noise floor has almost vanished:

The waveform plot of the 12K footage, downscaled to a 4K timeline reveals actually around 13 stops above the noise floor. Also, have a look how much cleaner the plot looks:

Comparing the dynamic range results to other S35 cameras

First and foremost, the question comes how does the 12K URSA Mini compare to other Blackmagic cameras?

The URSA Mini Pro 4.6K G2 showed 12.6 stops of dynamic range at SNR = 2 and 13.5 stops at SNR = 1 (in ProRes). Hence, slightly higher values than the 12K scaled to 4K, but the 12K shows 1 – 2 additional stops (beyond SNR = 1) within the noise floor that the 4.6K doesn’t – so with some additional post-production you will be able to carve out additional detail from the noise floor with the 12K camera.

Hence, all in all, the 12K is now leading the pack of Blackmagic cameras for dynamic range.

The Canon C300 MKIII shows the best recent dynamic range results for a Super 35 camera so far coming in at 12.8 stops at SNR = 2 and 13.9 stops at SNR = 1 – plus about 1 – 2 additional stops inside the noise floor (not counting the ARRI Alexa, which of course stays the leader of the pack for more than 10 years now – more on that in a future post).

Looking at the various resolutions options, my conclusion is clear – if you can afford the media costs to store the 12K files, my advice is to shoot in 12K – it gives you maximum flexibility in post.

A good compromise is shooting at 8K – not only does the camera switch to a faster sensor readout of 7.8 ms allowing higher frame rates up to 120fps, also the 8K files downsampled to a 4K timeline show solid dynamic range values.

All this, considering the sensor size is slightly bigger than Super 35 with a resolution of 80 mega pixel.

Have you shot with the URSA Mini Pro 12K yet? What are your impressions? Let us know in the comments below.