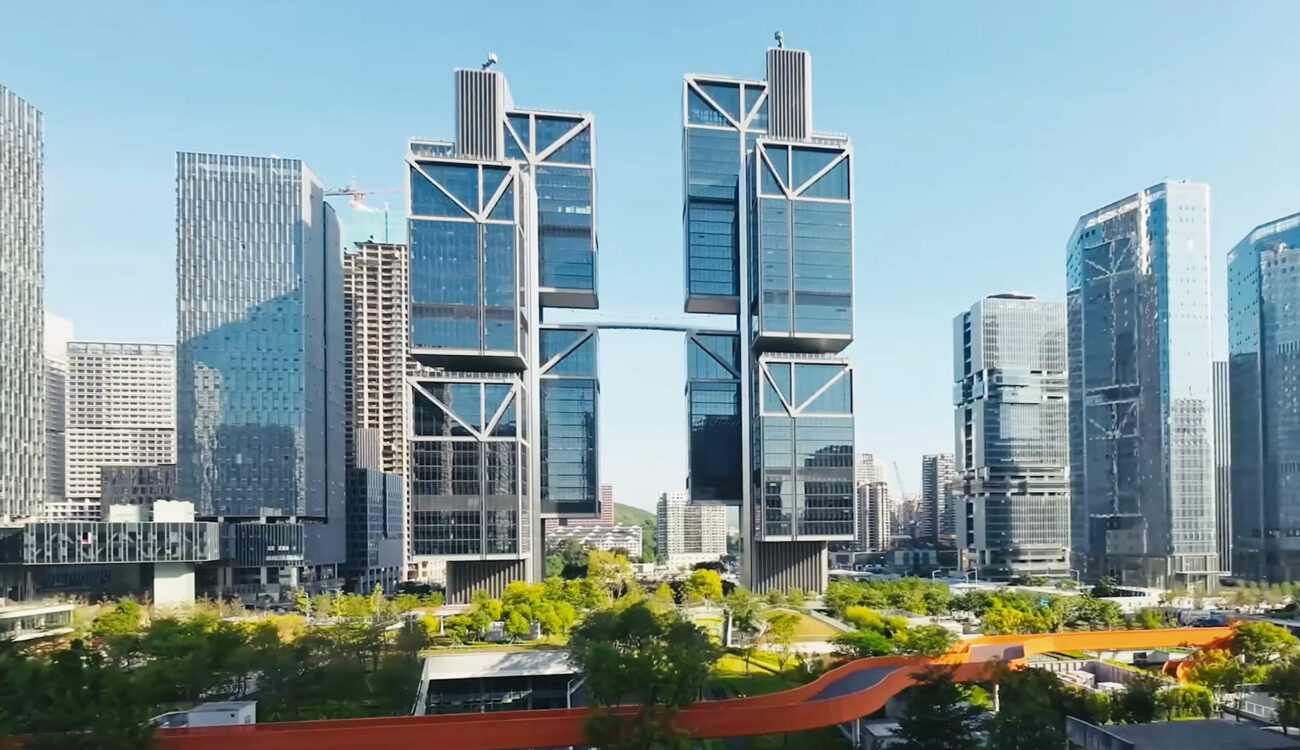 A few days ago, DJI released a new video that takes viewers on a fly-through journey through the company’s new headquarters in Shenzhen, China called DJI Sky City.

In the video, the company shows off its new and impressive headquarters in the Nanshan district in southwest Shenzhen, China. The building consists of two towers (44 and 40 stories respectively) built very close to each other.

At 105 meters, the towers are linked by a 90-meter-long suspension sky-bridge. As Frank Wang, the founder and CEO of DJI, stated, it took them 6 years to build the DJI Sky City. The building’s functions include offices, research labs, a test flight area, staff training, and public facilities such as a community healthcare center.

The architectural studio behind the DJI Sky city is Foster + Partners. Among other very interesting projects, these architects designed many of the Apple stores worldwide and they are also behind Apple Park – Apple’s famous headquarters in Cupertino, CA.

According to Foster + Partners, DJI Sky city also utilizes a few smart and resource-saving approaches. For example, rainwater is harvested and stored for reuse, and greywater is recycled for irrigation. The landscaped areas absorb rainfall and act as buffers during the monsoon season.

In the fly-through video, aside from the entrance area, a few corridors, a large auditorium, and an open-space office, we can also see large terrace sky gardens and the connecting pedestrian sky bridge between the two towers of the DJI Sky City. Perhaps the most interesting part of the fly-through is the four-story high drone testing hall. In this space, DJI briefly showed a few products including a large industrial drone, DJI Avata, or the DJI Matrice 30 including the automatic DJI Dock for automated pre-programmed inspection flights.

The fly-through video itself tries to look like a one-take from the start to finish, but I am not sure if that is really the case or if there are some clever invisible cuts. Especially when flying around the corners in the building’s corridors it seems likely there are some cuts incorporated. I think a huge portion of the video (if not all) was made using the DJI Avata – the company’s most recent FPV cinewhoop drone.

I am curious about which products will come from DJI in the near future. If I could wish for something, I would personally like to see a stabilized camera that will sit somewhere between the Ronin 4D and the DJI Pocket series. It could, for instance, have the Mavic 3’s camera module on it for what it’s worth…

Realistically, I expect to soon see the company bring a new aerial platform for the Zenmuse X9 gimbal cameras, for instance. In the meantime, DJI could also work on improving supply chains for certain existing products. I know many people who have been waiting a long time for the controller for the DJI FPV Drone Remote Controller 2 which is still back-ordered. Supply chains in general, however, are a problem for many global companies nowadays.

What do you think about the new DJI Sky City and the fly-through video? Do you use DJI products for your video work? What would you like to see DJI release in the near future? Let us know in the comments section underneath the article.