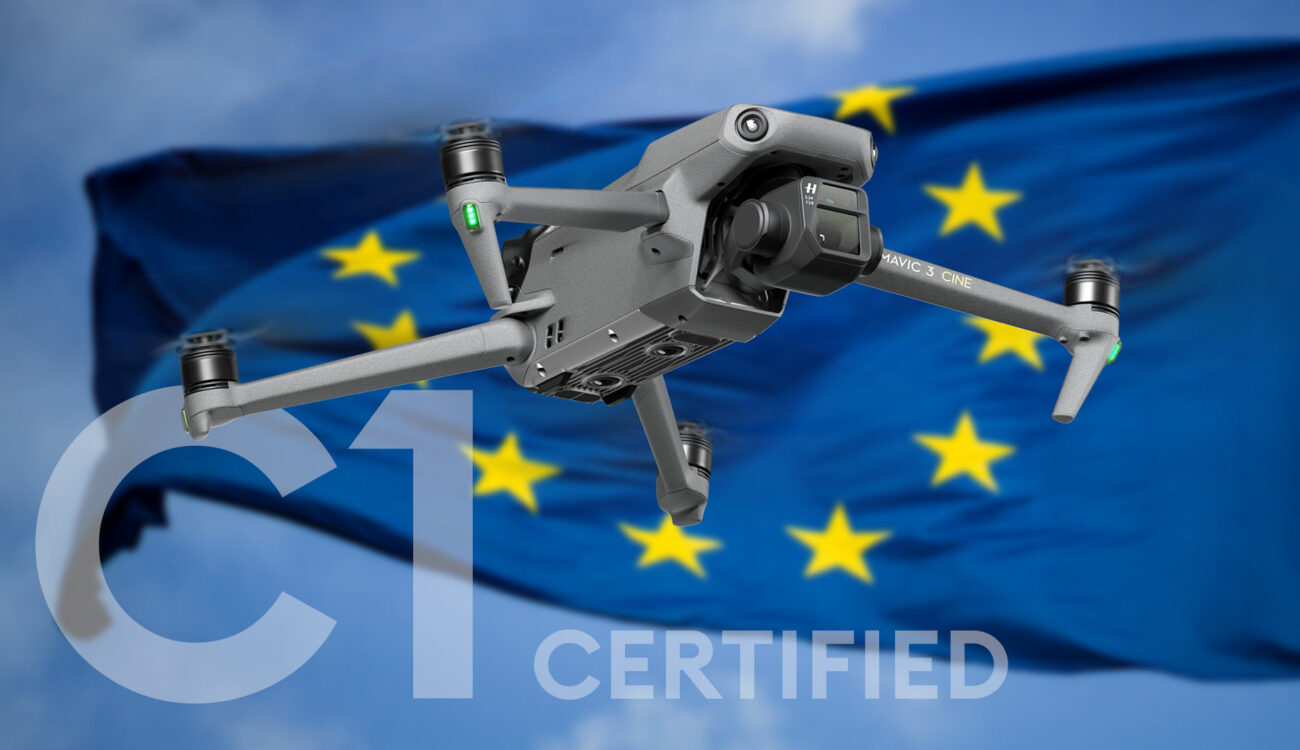 DJI just announced that the company has been granted the world’s first C1 EU-type examination certificate for the Mavic 3 series drone under the new European Drone Regulation. That means with the C1 certificate and C1-compatible updated firmware, Mavic 3 pilots will be able to fly in the A1 Open category (instead of the more regulated and harder-to-get A2) from January 2024 onward.

In recent years and with the increasing number of civilian-operated drones, it was clear that drone legislation needed serious updates and unification. In Europe, this happened quite recently, although most changes are currently in the transition period and will be fully effective from 1 January 2024. We summed up the most important information in our article from January 2021 when the new European Drone Regulation was published. To stay up to date on all the legal stuff about drone flying in Europe, I also recommend checking the official EASA website. Anyway, the C-class certification is a key component for drone flying in Europe in the upcoming years.

DJI Mavic 3 is the company’s current foldable flagship. Announced back in November 2021, the drone boasts an impressive spec sheet with a large gimbal-stabilized camera module capable of 5.1K 50fps video on an MFT sensor, up to 46 minutes of flight time, and so on.

As DJI says, the Mavic 3 now received a C1 certification by the officially recognized notified body of TÜV Rheinland (A global testing service provider based in Germany) and will therefore comply with the new European Drone Regulation. The certification is valid across the European Economic Area (EEA, i.e. EU plus Norway, Iceland, and Liechtenstein) and applies to all hardware and C1-updated-firmware of the current DJI Mavic 3 series.

According to DJI, the C1 certificate for the Mavic 3 series requires users to update to C1-compliant firmware which brings several advantages. Users will be able to fly in the new A1 Open Category and will no longer have to pass the complex and costly A2 “Remote Piloting License” exam (The A1/A3 “Proof of Competence” basic drone certificate, however, is still needed for all drones weighing 250 grams or more).

The C1-certified drone pilots will also have more freedom to fly in environments they have been restricted from without the certificate – unless obtaining special permission after an additional administrative process. EASA has a useful PDF file of all the C classes.

What exactly is the difference between A1 and A2? DJI summarized the exact differences between flying a drone with and without a C1 certification in three categories:

These changes will be activated whenever any C1-certified drone of the DJI Mavic 3 series is flown in the European Economic Area (EEA).

According to DJI, the application process for obtaining the new C1 class identification label for the Mavic 3 series is scheduled to be available to all customers from Q4/2022. From that date, users can request it on a voluntary basis at no cost. The process will require providing the drone serial number and confirmation that the C1-compliant firmware has been installed.

Once the C1 application process has been launched, all future firmware updates of the Mavic 3 series will include the technical changes required by the C1 certificate and cannot be reversed.

C-class certification for other DJI drones

The good thing is that DJI promises to get the C-class certification for the company’s other drones in time to comply with the new EASA rules. As the company states, it is committed to complying with the new European Drone Regulation for other existing and future drone models, and it will work with notified bodies to obtain additional drone certificates over the coming year.

Do you fly with the DJI Mavic 3 in Europe? Which other drone model would you like to see get a C-class certification? Let us know in the comments section underneath the article.