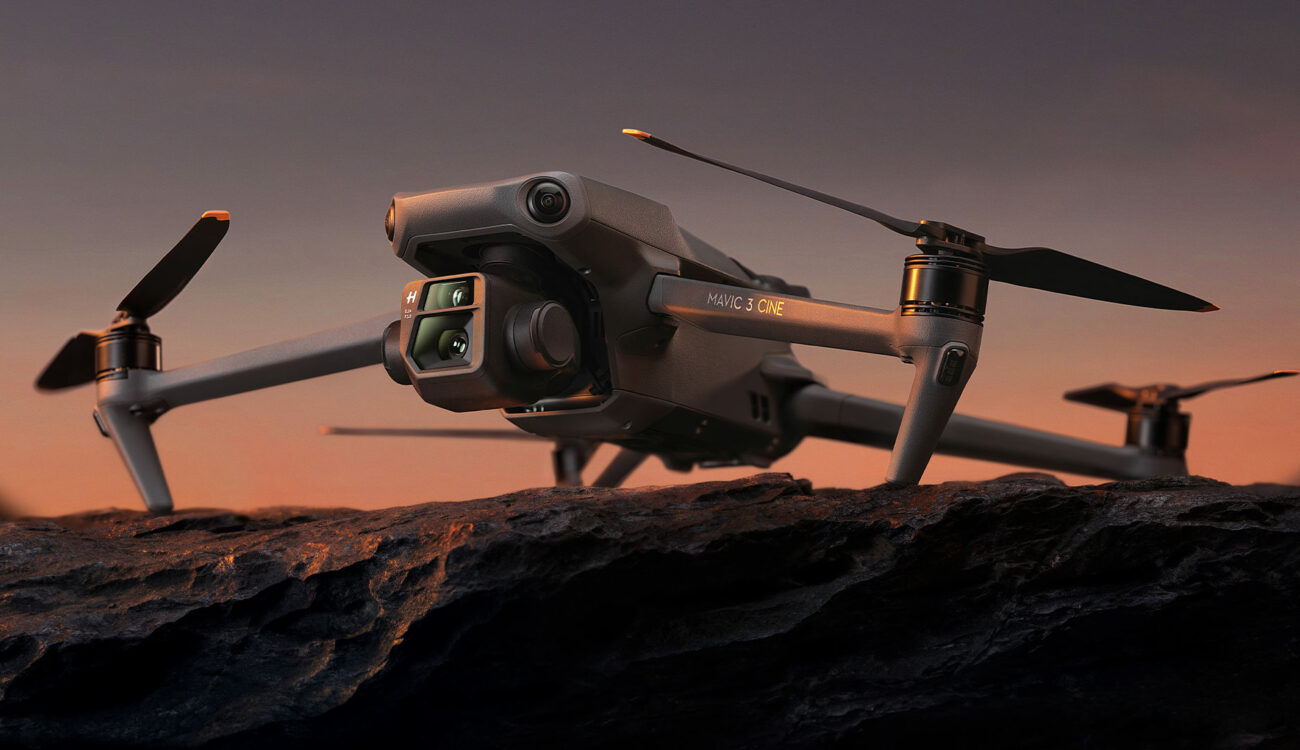 The newly released foldable drone DJI Mavic 3 features an 899g take-off weight with up to 46 minutes of flight time. The new camera module includes two cameras – the main unit has a 20MP 4/3″ sensor with a 24mm lens and can take still images in 12-bit DNG raw format or videos in 5.1K at up to 50fps, or 4K at up to 120fps. The second camera has a 162mm telephoto lens and can take 12MP JPEG photos or record video in 4K UHD 30fps. The Cine version of the Mavic 3 records a ProRes 422 HQ video on a 1TB built-in SSD on top of the H.264 and H.265 modes. The drones include a handful of smart features and are available now from $2,199.

With every new announcement, DJI confirms its leading position in the field of consumer drones. In August 2018, the Chinese tech giant announced the Mavic 2 Pro and Zoom drones. Especially the Pro has become a very popular tool for many filmmakers over the past years. When I saw the specs of the DJI Air 2S drone, which was announced in spring this year, I wondered what DJI throws on the table when they announce the real Mavic 2 Pro successor. After seeing the new DJI Mavic 3 specs, I am – yet again – impressed. Let’s dive into the features and specs.

Today, DJI announced two versions of the new Mavic 3 – the standard Mavic 3 and Mavic 3 Cine. Physically, the drones are almost identical. The only difference in construction is that the Cine version includes a built-in 1TB SSD. This is essential, because the Cine version records not only H.264 and H.265 video, but also Apple ProRes 422 HQ internally. The Cine version also comes in a bundle with the DJI RC Pro controller, and the DJI 10Gbps Lightspeed data cable.

Perhaps the most impressive part of the new DJI Mavic 3 is the new camera module. Sporting the distinctive look with the skewed lens cover and the Hasselblad logo in the corner, the 3-axis stabilized camera module now includes not one, but two cameras.

The main camera (which DJI calls L2D-20c) incorporates a larger 20MP (5280×3956) 4/3″ CMOS sensor. It can take still images in 12-bit DNG raw format and videos in 5.1K at up to 50fps, or 4K at up to 120fps. According to DJI, the main camera has a native dynamic range of 12.8 stops. The lens used for this sensor has a 24mm focal length (full-frame equivalent) with 84° FOV. That is 7° wider FOV than that of the Mavic 2 Pro camera. An adjustable aperture of f/2.8-f/11 is available to adapt to changing lighting conditions. The new Vision Detection Auto Focus technology for quick focusing allows the Hasselblad camera to work with multiple vision sensors on board to capture distance data to optimize focusing speed.

Video recording modes from the main camera are available in the following resolutions:

To handle the large amounts of data from the ProRes codec and high frame rate videos, Mavic 3 Cine comes with a built-in 1TB SSD. For faster offload, the new DJI 10Gbps Lightspeed Data Cable comes with the drone in the Cine bundle.

When it comes to safety features, the Mavic 3 includes improved obstacle sensing and navigation systems. APAS 5.0 combines inputs from six fish-eye vision sensors and two wide-angle sensors to avoid obstacles in all directions and plan safe flight even in complicated environments. The omnidirectional obstacle sensing system also enables more intuitive subject tracking with the upgraded ActiveTrack 5.0 (which will be available with a future firmware update). It will allow Mavic 3 to move with the subject as it moves forward, backward, left, right, and diagonally, and fly alongside as well as around a moving subject. In addition, if the subject moves too fast and temporarily goes out of frame, the visual sensors on the aircraft will continue to track and frame the subject intelligently and pick it back up when it reappears.

Mavic 3 comes with a positioning algorithm that improves hovering precision with signals from GPS, GLONASS, and BeiDou satellites. This enables the drone to lock onto multiple satellite signals faster. The increased stability will help for instance when shooting long exposures and timelapse.

Additional safety systems of the DJI Mavic 3 include geofencing to alert drone pilots when they fly near sensitive locations, altitude limits to ensure pilots are aware of altitude restrictions, and the AeroScope Remote ID system that allows authorities to identify and monitor airborne drones in sensitive locations. The AirSense system, first widely introduced in DJI Air 2S, warns drone pilots of nearby airplanes and helicopters transmitting ADS-B signals, so they can quickly fly to a safer location.

Thanks to the new motors and propellers with higher energy efficiency, a higher-capacity battery (5,000 mAh / 77Wh), and reduced weight of the drone’s structure and components, DJI Mavic 3 offers an impressive flight time of up to 46 minutes. Additionally, DJI streamlined the shape of Mavic 3’s arms, body, and gimbal so it produces 35% less drag than previous generations, allowing faster top speeds. In Sport mode, the maximum ascent speed is 8m/s, maximum descent speed is 6m/s, the maximum flight speed is 21m/s. For reference, the Mavic 2 Pro had these speeds 5m/s, 3m/s, and 20m/s respectively.

With the Mavic 3, DJI also improved the RTH function. The drone will automatically determine the shortest, safest, and energy-efficient route to land back at its home point. At the same time, it measures the wind speed of the current environment and calculates the power required for returning home based on the wind speed and the return path in real-time. This provides users with more time before triggering the RTH action.

DJI O3+ is an upgraded transmission system for stable, smooth, and clear video transmission even under challenging conditions, such as flying a drone in an environment with strong signal interference. With a maximum control range of 15km (FCC-compliant, unobstructed, free of interference), O3+ enables Mavic 3 to fly further and transmits signals with higher stability and less video lag. Mavic 3 is DJI’s first drone that offers a 1080p 60fps high frame-rate transmission live feed.

The drone also offers some new intelligent modes which will all be available in January 2022 through firmware updates:

It would not be a DJI product if there wasn’t a handful of accessories available right? The DJI Mavic 3 comes with some of these accessories in the Fly More Combo, but some need to be purchased separately.

The DJI Mavic 3 drone is available now and you can choose from three different packages:

What do you think about the new DJI Mavic 3? Do you fly with the previous Mavic 2 Pro and are you planning to upgrade? Let us know your thoughts in the comments section below.