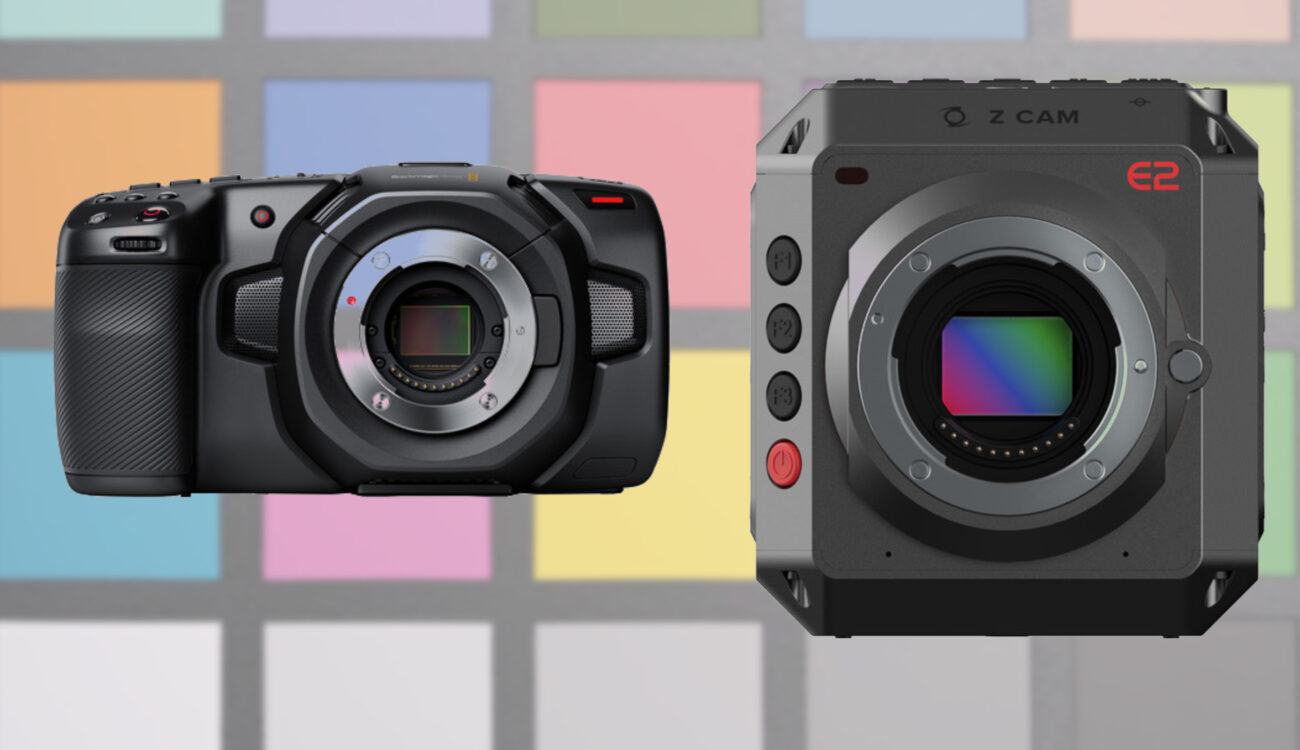 Z CAM E2 newest firmware (0.89) is already available for downloading (see our article by clicking here), and the big news is, it allows internal RAW recording. That made the Z CAM E2 a perfect candidate for our cinema5D latitude test. How does it fare? How does it compete directly with the Blackmagic Pocket Cinema Camera 4K? Interested in finding more? Please read on… 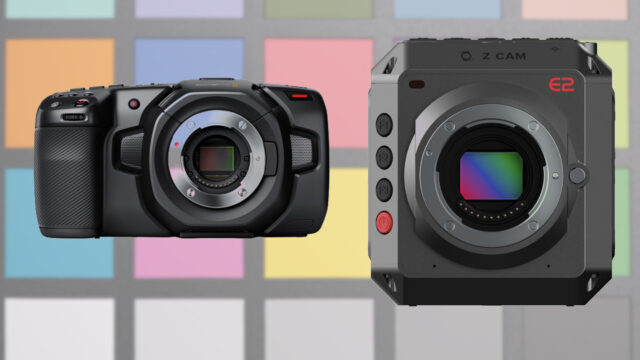 For quite a while I have been using the Z CAM E2, a camera made by the Chinese manufacturer Z CAM. I shot a mini documentary with it in India (see my hands-on review here) and currently I am testing the VAZEN Anamorphic 1.8x 40mm T2 lens with it as it offers this nice almost full sensor 3696×2772 mode in ProRes HQ which desqueezes to a 1:2.4 ratio (review is coming soon).

Z CAM is constantly improving on the feature set of this camera via firmware upgrades, and just recently they made another important move and released an internal RAW recording option by the name ZRAW.

My colleague Jeff elaborated on ZRAW in this article, but in short, ZRAW supports up to 4096×[email protected] recording to the internal CFast card (60fps to come at a later stage).

So we had to put this new feature to the test against the BMPCC 4K in our cinema5D latitude test.

If you are a regular reader of our website, you have already seen some of our latitude tests. Let me quickly recap on what it is:

Latitude basically shows the capability of a camera to retain color and detail while over- or underexposing the image and normalize it back thereafter.

In this test we have a standard scene which shows Johnnie sitting next to a color checker: 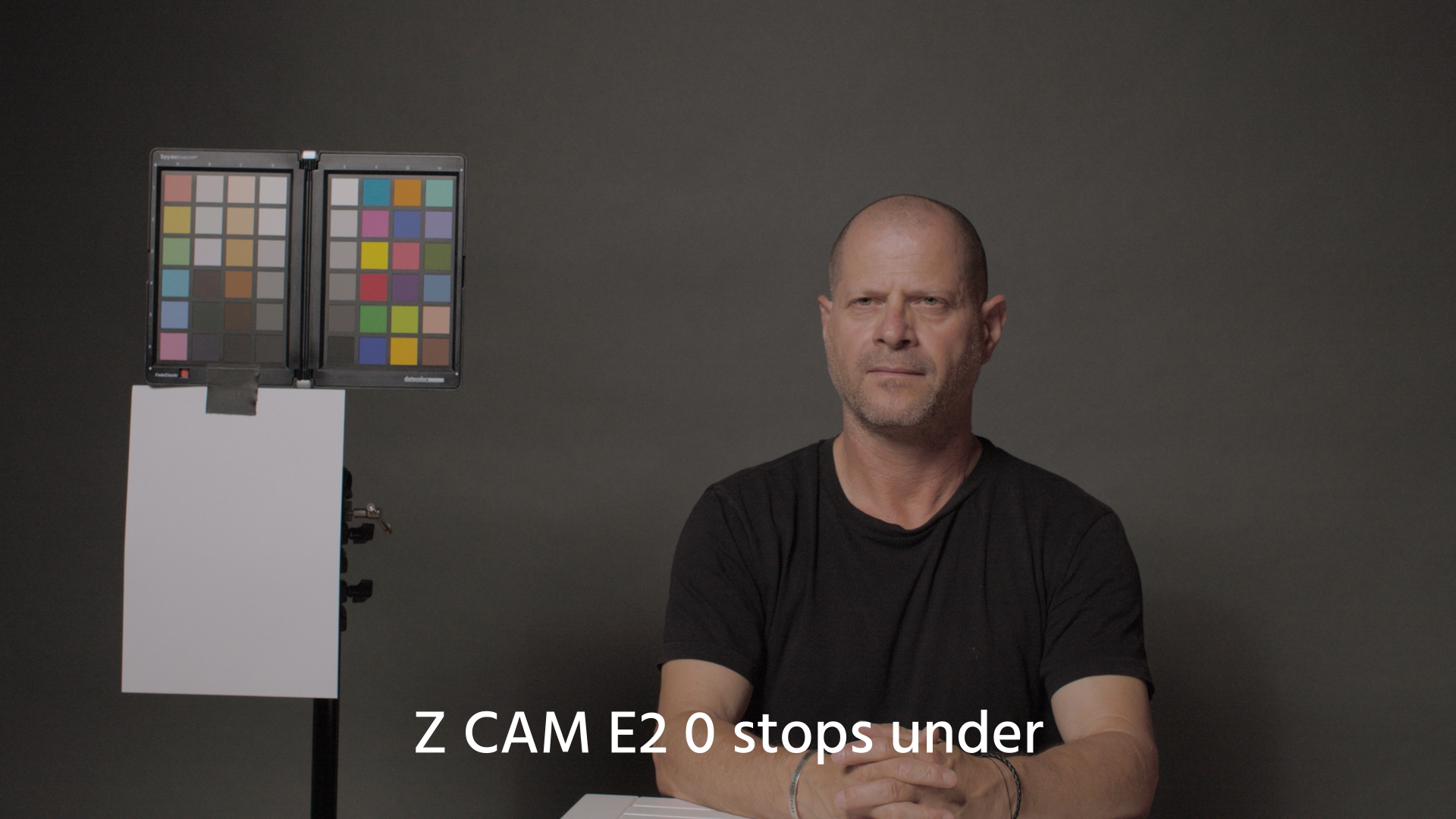 From the baseline settings (exposing the face at max. 60% luma, the white sheet of paper at max. 65% luma value) we successively underexpose the shot by 1 stop until we have reached 4 or 5 stops of underexposure. Which we then push back to zero in post, by using the respective camera tools like the ZRAW VideoSuite for the Z CAM E2 and the DaVinci Resolve RAW camera tab for the BMPCC 4K.

As said above, the ZCAM ZRAW files were developed using the standalone ZRAW VideoSuite which you can download from the Z CAM homepage (Windows 10 only for now).

The standalone ZRAW Video Suite from Z CAM (Windows 10 only).

It provides all the necessary exposure correction and grading tools that you could wish for to (batch-) develop the ZRAW files and convert them into DNxHR HQX files. However, it currently does not interface with any 3rd party software like Premiere Pro or DaVinci Resolve, hence the workflow is quite cumbersome for now.

The color grading and exposure correction tools in the ZRAW Video Suite.

For this latitude test I basically only adjusted the exposure settings (shown in 1/3 stops, so the encircled “15” value above means 5 stops of exposure correction for example), and developed the files using the Rec709 color space to avoid any additional grading steps thereafter.

The file sizes of ZRAW are about 50% bigger than the corresponding BRAW 3:1 constant bitrate files at the same resolution/frame rate of the BMPCC 4K. I don’t want to spoil the result of this test, but I don’t see any advantage using ZRAW vs. ProRes HQ on the Z CAM E2 for now. 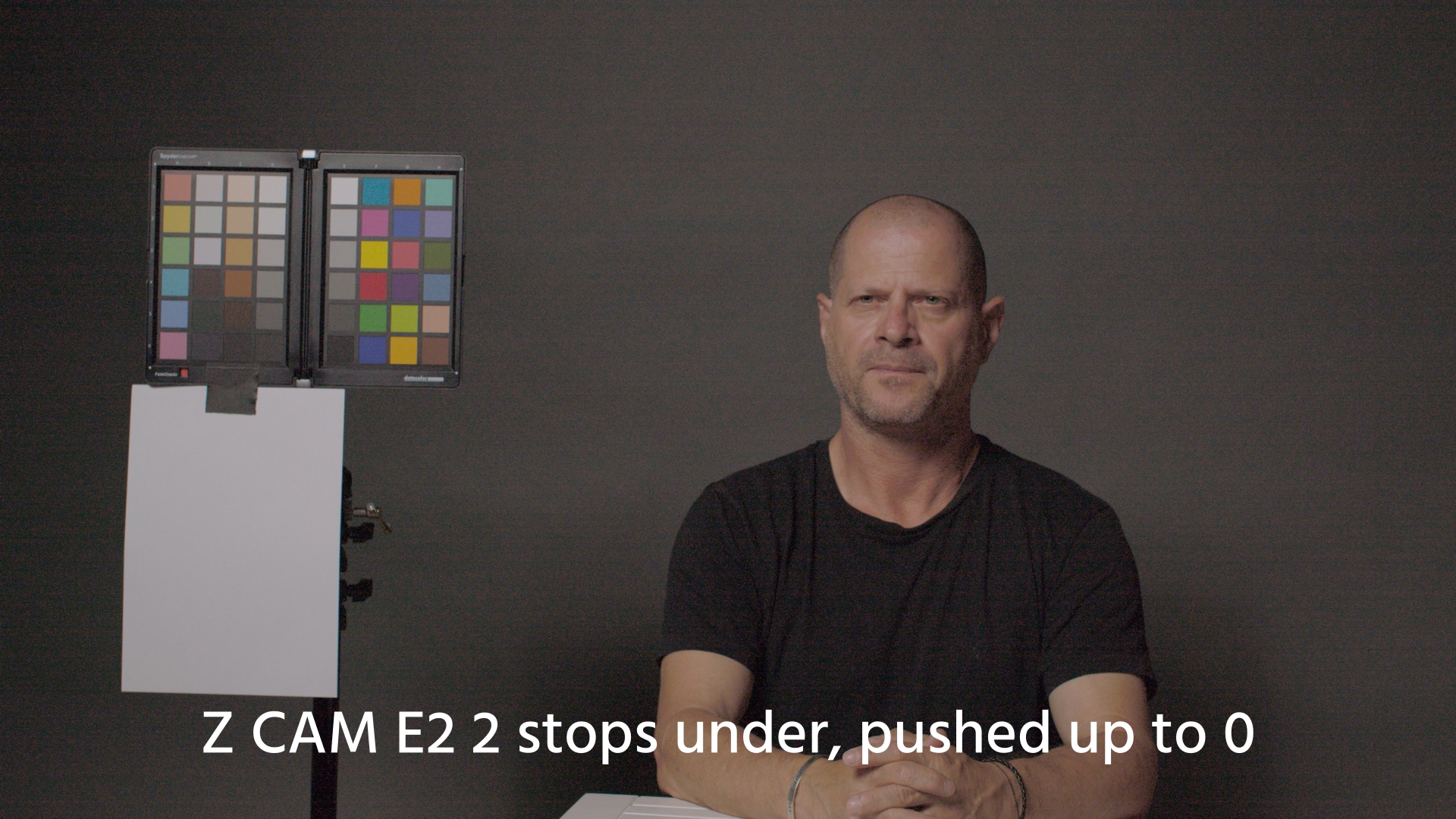 Z CAM E2 at 2 stops underexposure, pushed back to zero. Still usable, but noise is already strongly present in the image. 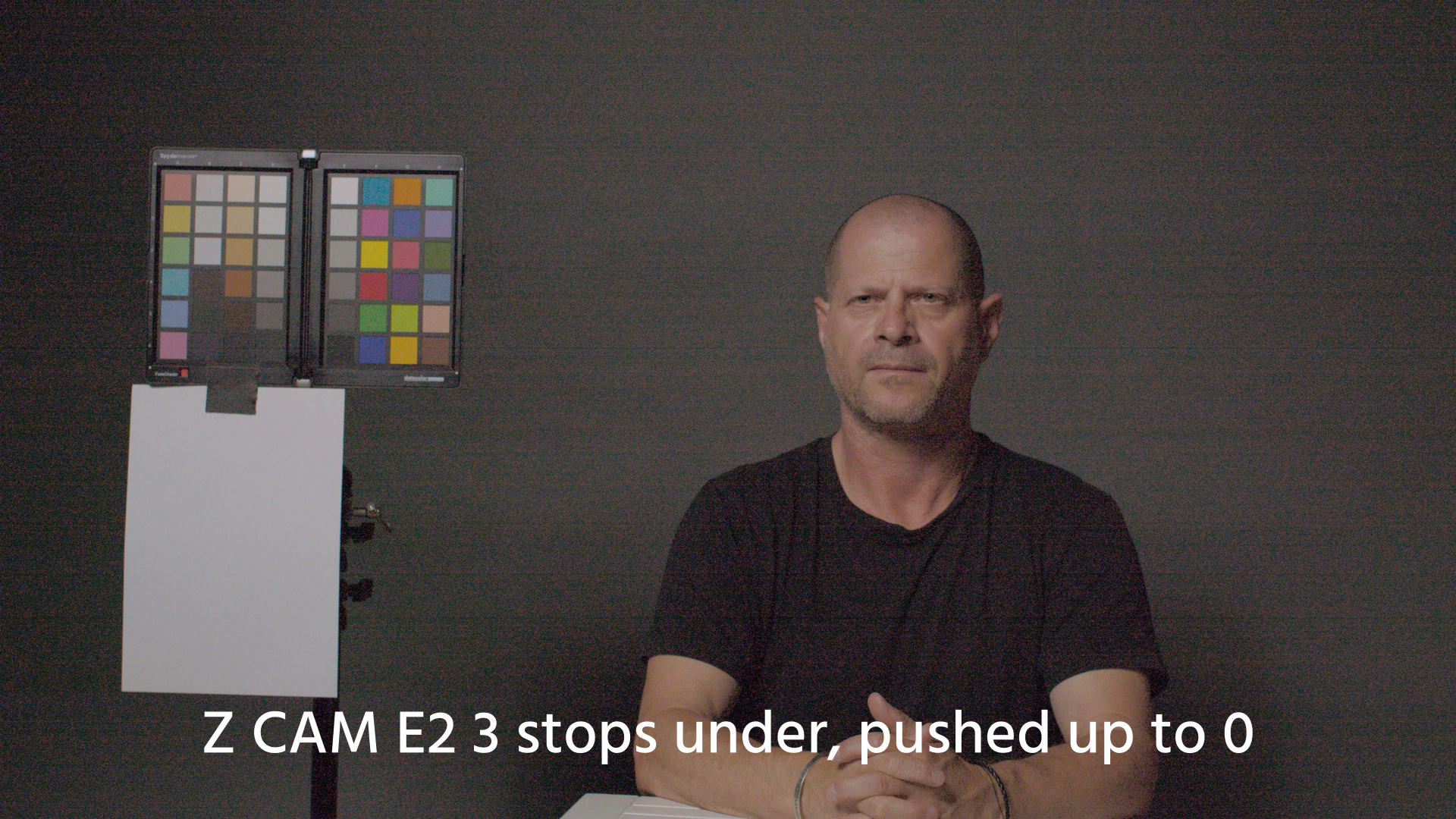 Z CAM E2 3 stops underexposed, pushed back to zero. Horizontal stripes start to appear which cannot be removed any longer. The point of no return has been reached.

Compared to the BMPCC 4K which we ran side by side to the Z CAM E2, we can clearly see that the BMPCC 4K has about 1 stop better latitude – which is consistent with our Dynamic Range measurements of both cams (Z CAM E2 shows 10.8 stops at SNR = 2, BMPCC 4K shows 11.6 stops at SNR = 2): 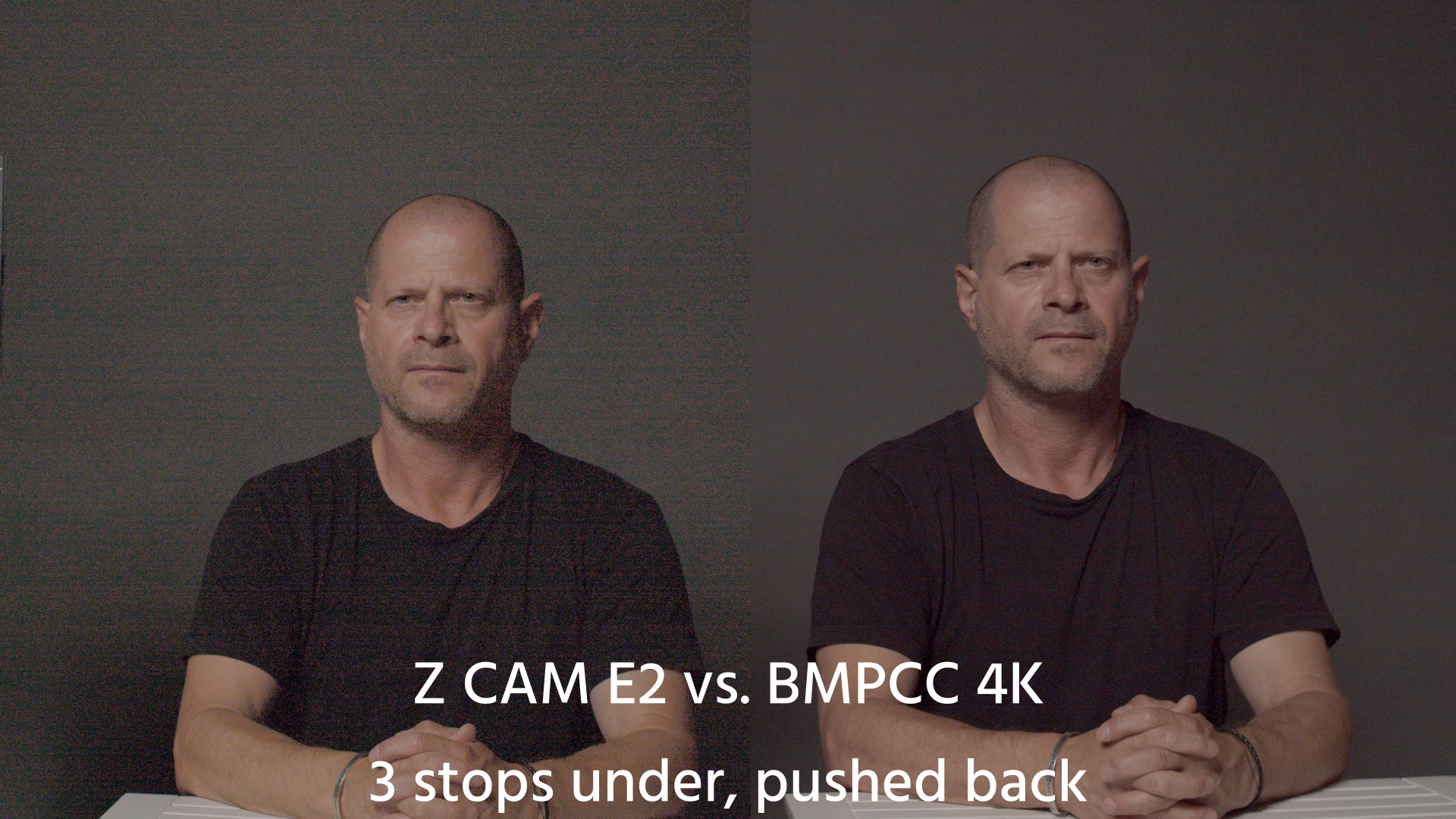 Z CAM E2 vs. the BMPCC 4K at 3 stops underexposure, pushed back. The Z CAM E2 (Left) has crossed the limit of usability, whereas the BMPCC 4K (Right) still holds up.

At 4 stops under, also the BMPCC 4K reaches its limits, showing horizontal stripes which cannot be removed (the same result was found in our BMPCC 4K vs. BMPCC 6K comparison here). 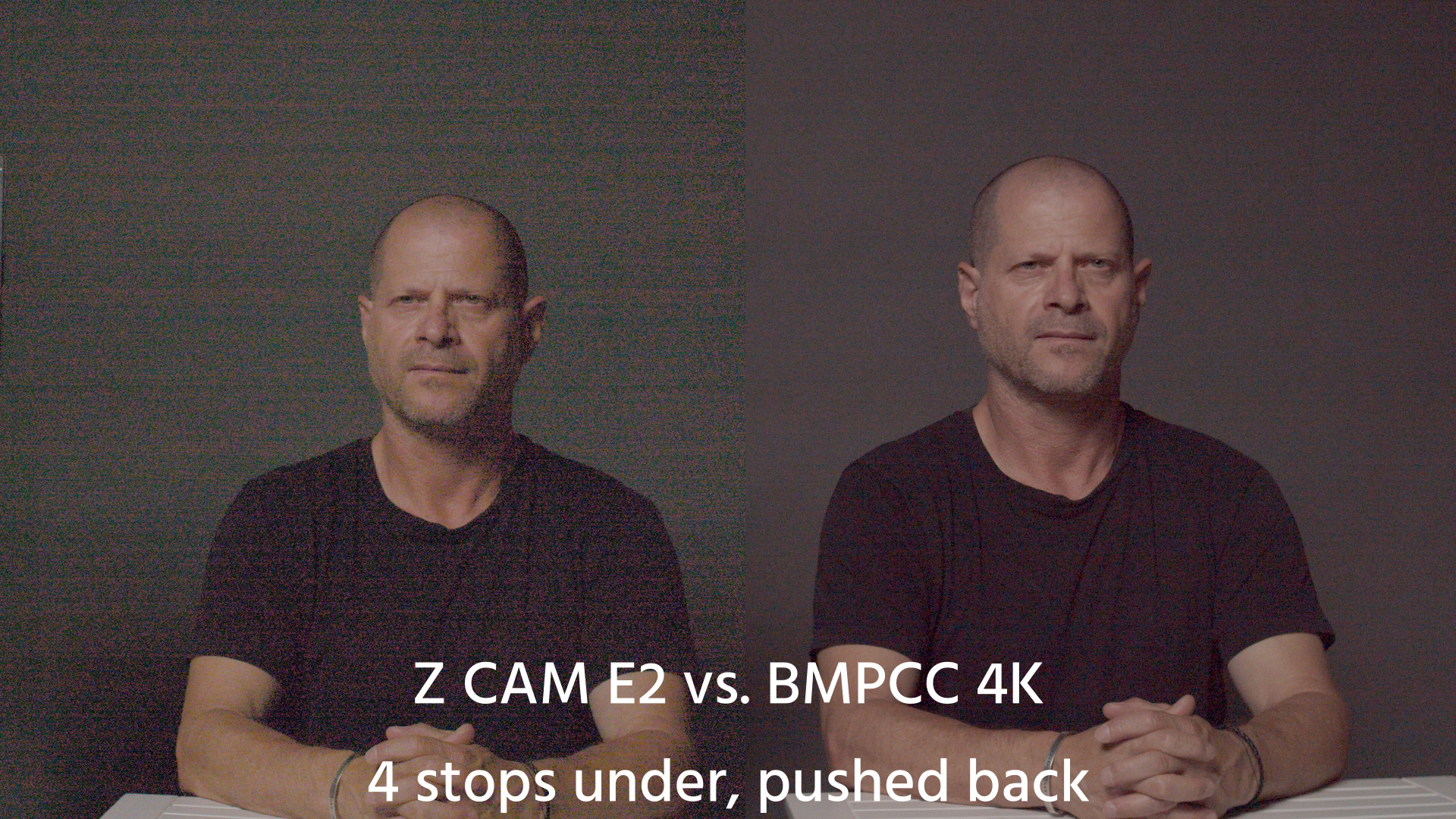 Z CAM E2 vs. BMPCC 4K at 4 stops underexposure, pushed back to zero. Both cams are beyond their limits.

At 4 stops underexposure, the BMPCC 4K image starts to become pink, whereas the Z CAM E2 image retains the colors – but a lot of pink noise appears. Both not very desirable. By the way, have a look at our recent BMPCC 6K lab article – you can directly compare the results as the studio settings as well as the exposure values were exactly the same. 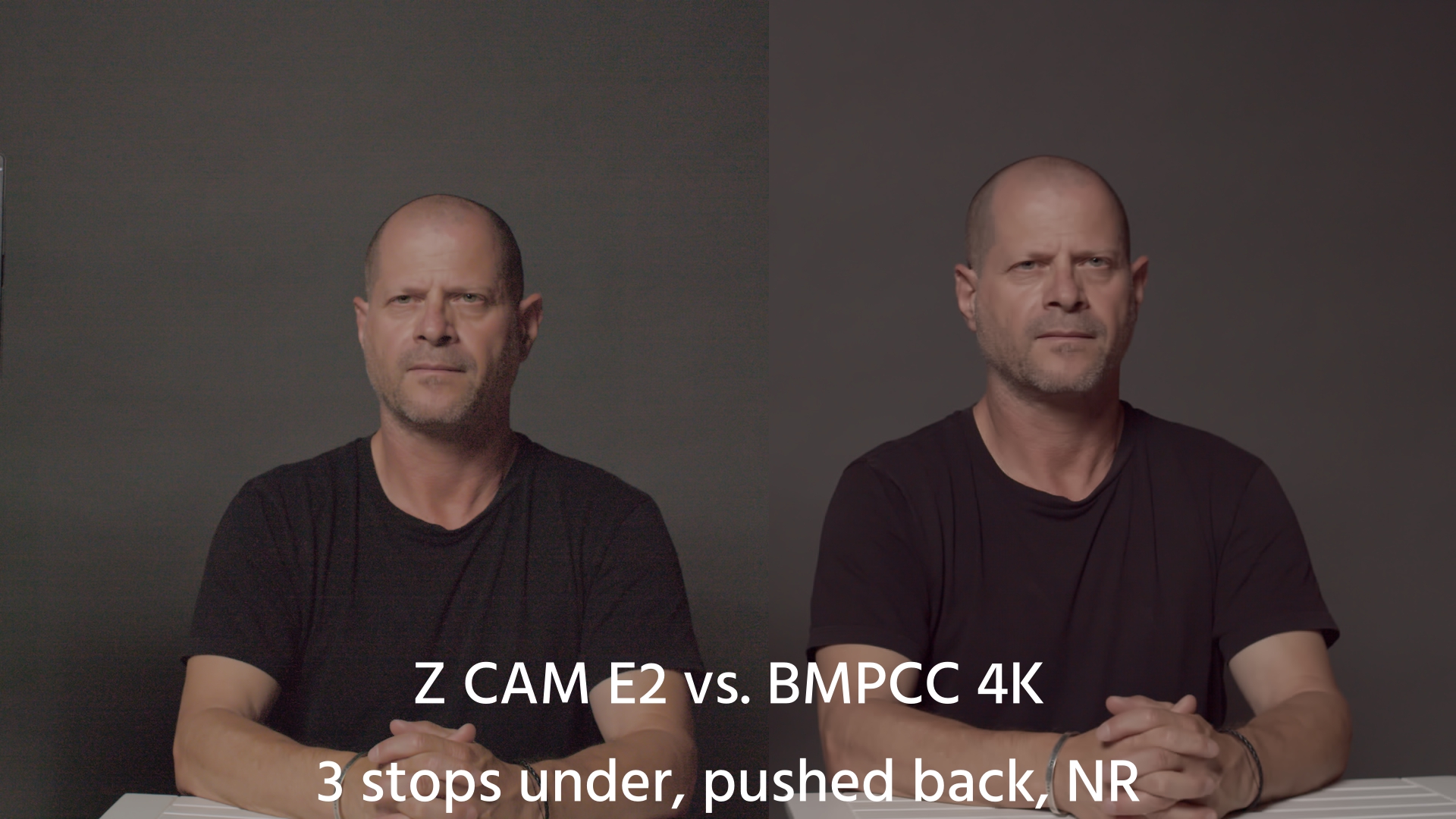 Z CAM E2 vs. BMPCC 4K at 3 stops underexposure, pushed back and using noise reduction (temporal and spatial) in Resolve. The Z CAM image cannot be recovered as the stripes don’t go away (have a look at Johnnie’s shirt, for example).

Z CAM E2 vs. BMPCC 4K at 4 stops underexposure, pushed back to zero and using temporal and spatial noise reduction in Resolve. Now also the BMPCC4K image cannot be recovered any longer (more easy to see during playback of the video files, not so easy to see in the scaled static images of this article).

Now you may ask why I haven’t tried the noise reduction features of the ZRAW Video Suite? 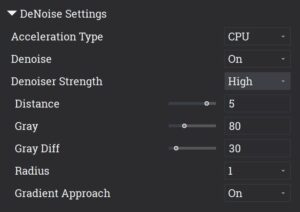 I did various tests with the DeNoise settings on the ZRAW files from the Z CAM E2 while developing them, from “Low” to “Highest”. As there is no documentation from Z CAM, you are left to speculate what the individual settings do to the image.

I found that leaving the noise reduction settings “off” in the VideoSuite and using the DaVinci Resolve settings described earlier was giving me the best results (I used the same settings for both cams).

Conclusion and a Statement from Z CAM

I love the image from the Z CAM E2 at the correct exposure settings, and I applaud the efforts of Z CAM to bring the internal raw recording to the E2 camera.

But at the end of the day, we have to see what it really offers. In essence, you should not underexpose important areas of your image more than 2 stops, and ZRAW shows rather limited possibilities to bring it back.

As things are currently, I do not see an advantage of ZRAW over ProRes for the Z CAM E2, and for the following reasons I cannot recommend using ZRAW:

In stark contrast to all the shortfalls above, stands the strong competition from Blackmagic RAW: File sizes are comparatively small (with a lot of options to further reduce them while retaining the 12 bit raw character of the image), the workflow in DaVinci Resolve is super easy and even 6K BRAW files run smoothly on my 2014 Laptop …

A Statement from Z CAM

We want to be fair and give a chance for the camera manufacturers to respond to our findings before publishing such an article, so we approached Kinson Loo (Z CAM’s CEO) and asked for his response.

He and Jason Zhang from the technical team were very cooperative and responded immediately, giving us some insights on their motivation for implementing ZRAW and de-noising:

“The key point for RAW is the details of the image. … The RAW test should always include detail test. Our ZRAW is designed to achieve a visually lossless image of a complex scene. We suggest that you shoot complex scenes to check the resolution of the ZRAW. … This would explain why you need larger ZRAW files. … If you don’t care about extreme details but care more about noise then ProRes is a much better choice. …ZRAW itself should have a lot more noise than a YUV based format as the noise came from the sensor. YUV based files including ProRes and H265 have the image signal processor involved so it will have a different level of noise reduction which cannot be performed at Bayer level. … In camera noise reduction / curves / color correction are some major components of the image signal processor … We don’t add 2D noise reduction and chroma noise reduction in ZRAW VideoSuite and our Z CAM  DeNoiser adopts full optical flow based 3D noise reduction which does not hurt details. We would consider adding more denoise related features to our image processing pipeline in the future. … Since your test is noise based so we recommend using our denoise software Z CAM DeNoiser to process the video and test again. We could reduce more noise in the camera but some professionals don’t like it and that’s why we introduce ZRAW”

What do you think? Have you used the Z CAM E2, do you have experience with ZRAW? Please share your comments in the section below.