Check out the Zacuto Trigger Arm system: its quick release design allows you easily pivots at the joints, allowing for convenient storage and ergonomics. Zacuto Product Designer Steve Weiss told Nino all about it at Cine Gear 2016 at Paramount Studios Hollywood.

The battle for shoulder rig comfort continues. The new Zacuto Trigger Arm is the latest newcomer to an ever more populated market of accessories for cameras such as the Sony FS5, Sony FS7, and Canon Cinema line, whose usability benefits greatly from a good shoulder rig and grip arm. Nino has reviewed the Shape FS7 Extension Handle in a video review already, which is the closest match to this upcoming Zacuto product. 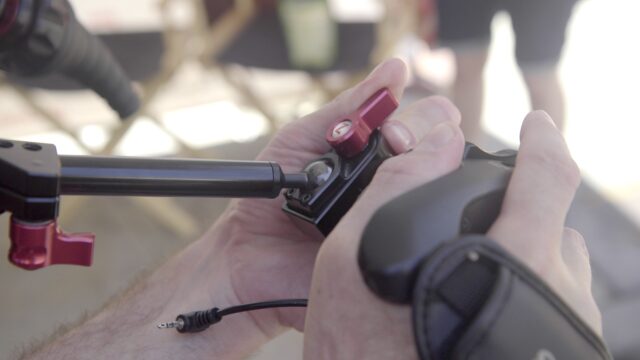 The Zacuto trigger arm works by connecting the grip of your choice to their existing shoulder rig, allowing you to quickly pivot it out of the way with the flick of a knob. This means you can quickly set the camera on a flat surface, or even store your camera in a case or bag without having to remove the arm.

The arms themselves are all slightly different depending on the camera they’re designed for, but what they all have in common is their multiple angle adjustments to give you just the position you need to stay comfortable during those long shooting days. The Zacuto Trigger Arm system can also be used with other arms, as the main connection is a standard 15mm rod.

The Zacuto Trigger Arm will be available soon, and we will keep you updated with all the relevant links.