The Wireless AtomX SYNC module is a new product from Atomos and Timecode Systems which should make multi-camera setups sync much easier. It connects to Ninja V’s expansion port and synchronizes more recorders and Timecode Systems products wirelessly in one network. All units in the network can also be controlled from one Ninja V unit. In the future, there will also be a remote app to control the whole network. AtomX SYNC module should ship within a few weeks and the price is around $150. 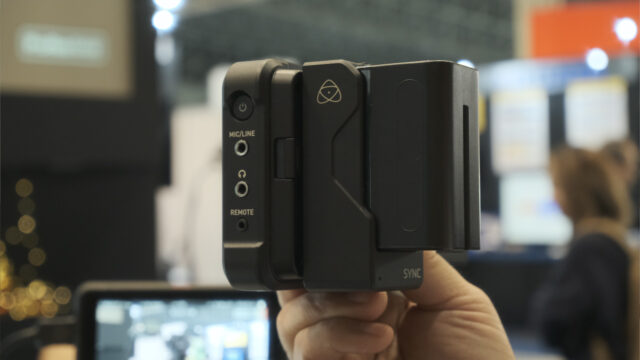 Atomos SYNC sandwiched between the Ninja V and a battery – Image credit: cinema5D

At the end of October 2019, Atomos announced the acquisition of Timecode Systems, a UK-based company designing and producing timecode sync solutions (our news post can be found here). Atomos promised integration of Timecode Systems technology into their products for better and easier multi-cam production workflows.

One of the first outcomes of the acquisition is the AtomX Wireless Sync module for Atomos Ninja V. During Inter BEE 2019 in Japan, Atomos and Timecode Systems presented the working modules. My colleague Johnnie asked Paul Scurrell from Timecode Systems about this new module and the future of Atomos timecode synchronization.

AtomX SYNC module takes advantage of the expansion port of Ninja V. It connects right to the body of the recorder and provides a battery plate for Sony NP batteries. The module itself also contains a small battery that acts as a hot swap solution, so users can change Sony NP batteries without powering down the recorder.

The module can wirelessly synchronize multiple Ninja V recorders equipped with SYNC modules, other Timecode Systems products, and new Atomos products with built-in wireless sync modules. The module integrates the timecode information directly into the video files from the Ninja V. The number of synchronized devices is unlimited.

Every AtomX SYNC module contains a long range wireless antenna to communicate with other Ninja recorders with SYNC modules on set. It also contains a Bluetooth antenna to connect to a smartphone. Atomos will offer a remote app, which will be able to connect to the AtomX SYNC module and control it. Through one module, it will be possible to control all the devices in the network. Atomos remote app will basically offer all the controls which are accessible on the touchscreen of Ninja V itself.

AtomX SYNC module is available for pre-order now and it should start shipping within the next few weeks. The price for the module is around $150.

What do you think of the Sync module for Atomos recorders? Can you imagine using it on your multi-cam shoots? Let us know in the comments underneath the article.