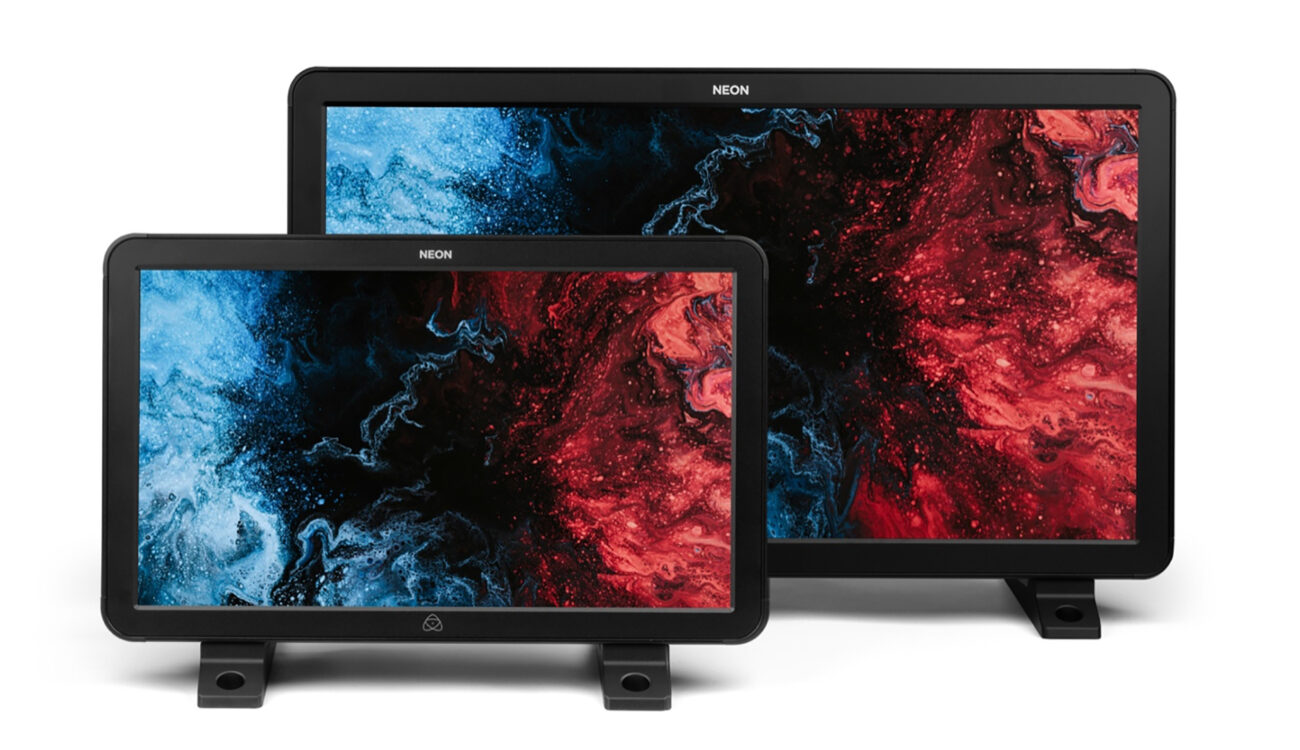 Recorder/Monitor manufacturer Atomos announced their foray into large scale field- and production monitors at Cine Gear in 2019. Now, after some delay, the first two models of the Atomos Neon are shipping.

A year back Atomos announced four different sizes: 17″, 24″, 32″ and 55″ for its Neon range of production monitors/recorders. Now the Atomos Neon 17″ and the Atomos Neon 24″ are almost ready to ship out to customers.

The Neon series are high-end precision monitor/recorders that seamlessly work in a range of scenarios from studio/virtual production monitoring to accurate color grading.

Atomos Neon HDR/SDR monitors should offer accurate and consistent SDR/HDR monitoring and provide recording functionality for easy shot reviewing or render-free output delivery at up to 4k DCI 60p. They are easily deployable in the studio, in the edit, or for remote workflows. The recording functions are still there, but are taking a back seat in order to give the front row to accurate color reproduction for post production.

All screens are factory calibrated. However, user-calibration is possible with the optional USB calibration cable and Xrite i1 Display Pro Plus.

Broadcast frame guides with the option of EBU R5 graphic and action safe areas can be enabled for on screen display. Cinematic guides are also available and can all be used alongside the anamorphic de-squeeze mode. Support for 2x, 1.5x and 1.33x to allow you to match a wide variety of lenses.

The Master Control Unit (MCU) is the brain of the NEON. It supports HDMI 2.0 for both in and loop out. It provides support for video input at 4096 x 2160 4K DCI at up to 60p.  The MCU firmware is upgradable and allows storage of up to 8 x 3D LUTs in its internal memory. Neon includes the AtomX SDI module which provides 2 x 12G SDI.  The configurable ports allow for input of up to 4K60p video. It’s with backward-compatible with single or dual-link 1.5G/3G/6G SDI or the ability to toggle between A and B cameras.

Do the Neos replace the Sumo-line?. The answer is no — the Neon lacks the Sumo’s multicam recording/switching features. There is no RAW recording with the new Neon monitors. They can only record video using Apple ProRes and AVID DNx codecs. And while the image quality of the Sumo is good, the Neon’s panels are of way higher quality.

Operation only via macOS and iOS

There is no touch-interface on the Neon series of monitors. Touching the anti-glare coating of the monitors with greasy fingers would impact image quality too much. The Neons don’t even have hardware-buttons: the AtomRemote iOS App controls the Neon’s functions via Bluetooth. Atomos plans to bring a control app to macOS in the near future. Unfortunately, there is no support for Windows or Android at this point.

The Neon series is clearly geared towards a different audience than Atomos’ previous products. I don’t expect to see a Sony Alpha shooter running and gunning with a 17″ €4k monitor.

The 17” might be ideal for focus pullers, gaffers, wardrobe and as a production monitor for mobile laptop edit systems. The 24” is perfect for the video village, DIT, and cinematographer. Providing an accurate and comparably affordable monitor for an NLE and grading application that outputs via industry-standard video I/O devices.

As a limited edition launch promotion the Neon 17” and Neon 24” will include in a custom-made HPRC flight case without additional charge for the customer.

What do you think of the Neon-series of Atomos monitor recorders? Are they something you’ll take with you on set or set up in your editing bay? Please let us know in the comments.