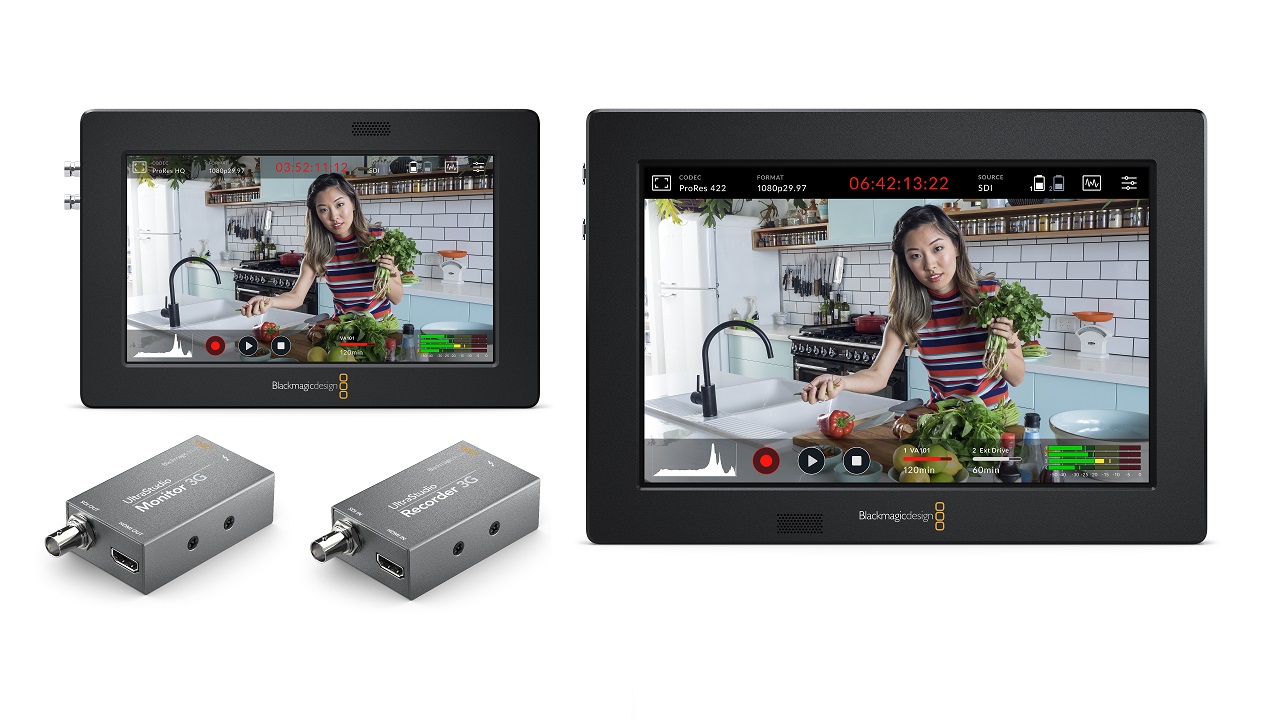 In yesterday’s live stream Blackmagic Design announced new Blackmagic Video Assist 3G models – more affordable alternative to 12G models. Coming in two versions – with 5″ and 7″ touchscreen LCDs – the models offer recording in up to 1080p60 in ProRes or Avid DNx to SD cards via HDMI or 3G-SDI inputs. Available now for $495 (5″) and $695 (7″). Also announced were new UltraStudio 3G Monitor and UltraStudio 3G Recorder. Both pocket-sized devices offer 3G-SDI and HDMI connections plus high-speed Thunderbolt 3. Available now for US$115 each.

The first thing Grant Petty announced in yesterday’s live stream was the new Video Assist 3G monitor/recorder. There are two new models coming with different screen sizes – a smaller 5″ model and a larger 7″ model. The idea behind those new models is to bring a more affordable alternative to Blackmagic’s Video Assist 12G models.

Both models can record up to 1080p60 video via HDMI or 3G SDI inputs. The recorded video is saved to affordable SD cards. The larger Video Assist 7″ models include 2 SD card slots so users can swap out any full cards even during recording for infinite length recording. The new Blackmagic Video Assist 3G models support recording in 10-bit Apple ProRes and Avid DNx. There is no BRAW recording within the new models.

The touchscreen LCD can be customized by adding or removing overlays such as current filename, focus peaking, zebra, false color, frame guides, 3D LUTs, and more. 3D LUTs support allows monitoring shots with the desired color and look. LUTs can even be “baked in” if desired. On-screen, there are dedicated buttons for play, stop, and record, plus a mini timeline for scrolling through recordings.

When working in SDI formats, customers can record 2, 4, 8, or 16 channels of audio. For connecting microphones, the 7″ model has 2 XLR analog audio inputs with phantom power and high definition audio sample rates of 192 kHz at 16 and 24 bit per sample. The audio meters can be changed between VU or PPM ballistics.

Both new devices are portable, pocket-sized capture and playback solutions featuring 3G-SDI and HDMI connections plus high-speed Thunderbolt 3 technology. UltraStudio Monitor 3G and UltraStudio Recorder 3G are powered by their Thunderbolt connections so they can be operated from a computer’s battery or power source.

The new Blackmagic Video Assist 3G monitors/recorders are available now for pre-order. The price for the smaller 5″ model is $495, the larger 7″ Video Assist 3G will set you back $695.

The UltraStudio Monitor 3G and UltraStudio Recorder 3G can also be pre-ordered now. The price is the same – $115 each.

What do you think about the new Blackmagic Video Assist 3G and UltraStudio 3G? Are you planning to get one of those? Let us know in the comments underneath the article.