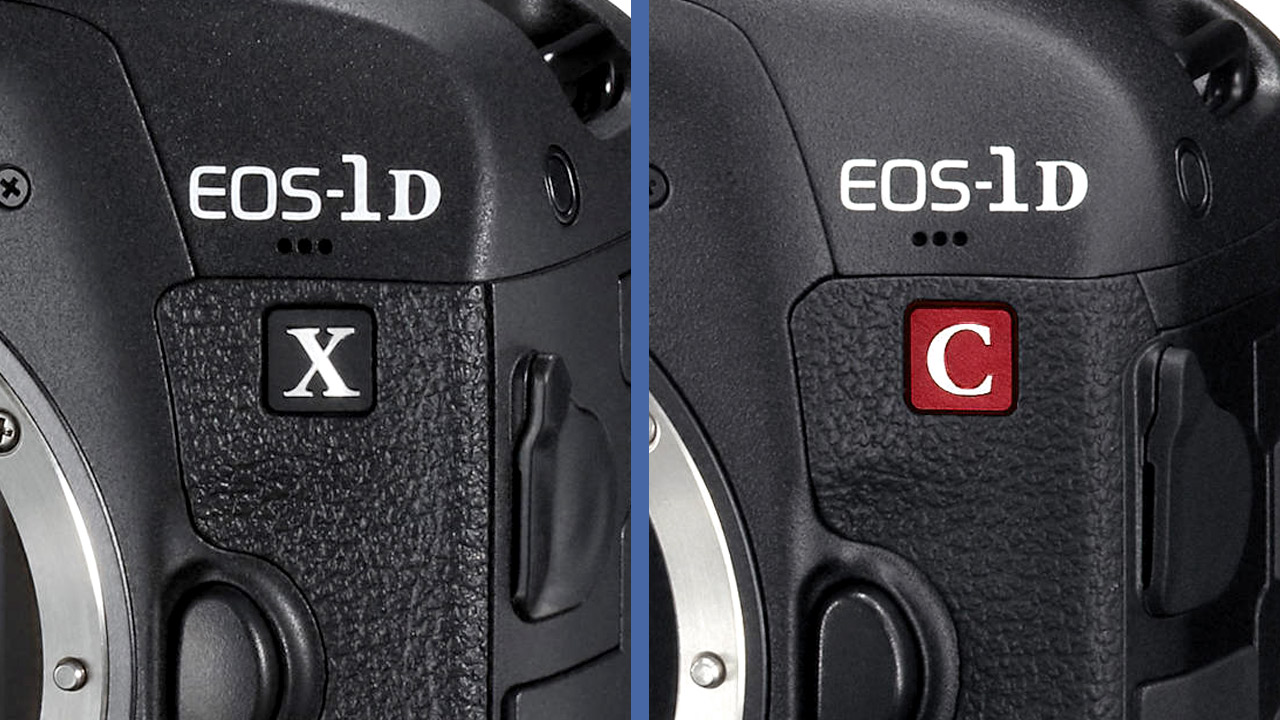 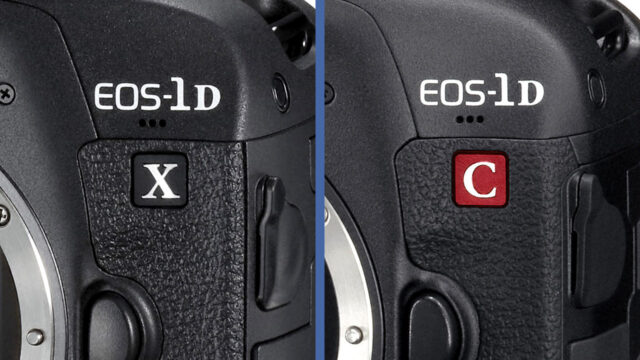 The Canon 1D X mark II is Canon’s latest flagship DSLR and it also shoots video. We were curious to find out how good its 4K capabilities really are: after all, it shoots up to 60p in full resolution. Johnnie reviewed the camera a few days ago, and here’s our Canon 1D X mark II vs. Canon 1D C lab test.

It is Canon’s first official “photo camera” that shoots 4K video. The company has been quite reluctant to offer high quality video in their photo products since they separated the professional cinema video segment a few years ago. Ever since then, we have seen Canon’s cinema line cameras like the Canon C300 mark II popping up at very high prices, making many entry level enthusiasts switch to Sony. 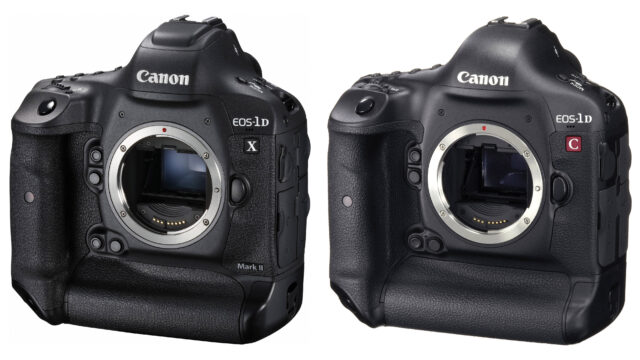 From the outside these two cameras look very much alike, and basically all buttons are in the same position. You might wonder: why does the 1D C (“C” as in Cinema Line) have the same layout as the 1D X (a stills camera). But this article is about the X, a photo camera that might, yet again, take the place of a video camera.

On its own, we know by now that the Canon 1D X mark II produces some very nice 4K video. But how good is it really? With the 1D C as a benchmark, let’s put it to the test. We will also throw the popular Sony a7S II into the mix as a second reference.

This is an attribute that is often overlooked, and that is difficult to measure properly. A good dynamic range rating allows us to capture more shadows and highlights in high-contrast scenes. We’re testing with a DSC labs XYLA-21 transmissive test chart and the Zeiss 50mm Cp2 macro (more on how we test HERE).

Our software measured about 11 stops of usable dynamic range on the Canon 1D X mark II. This is very similar to the rating of the Canon 1D C, and just under the 12 stops of the Sony a7S II. You can observe the two Canon shots side by side in the image below.

11 stops is a good rating for a camera. Most professional cinema cameras nowadays get between 10-13 stops in our tests. For example, the Canon C300 mark II is a camera that, in addition to us pointing out the horizontal strip that appears on overexposed portions of images, we rated at about 12 stops of usable dynamic range. This is about 2 stops weaker than the Arri ALEXA, which we rated at about 14 stops, as does the manufacturer.

Everything taken into consideration I would say the lowlight performance is quite similar. The Canon 1D X mark II should be used with caution beyond ISO 6400 and produces a bit more colour noise than the 1D C.

Image is 1 stop underexposed, to see the difference

The image above is about 1 stop underexposed. Notice how the different ISOs give us more or less the same results. This might also be due to the picture profile I used. I used C log on the Canon 1D C, which Canon decided to leave out of the 1D X mark II. In order to get a good flat image for better colour grading, I installed the Technicolor Cinestyle on the 1DX. 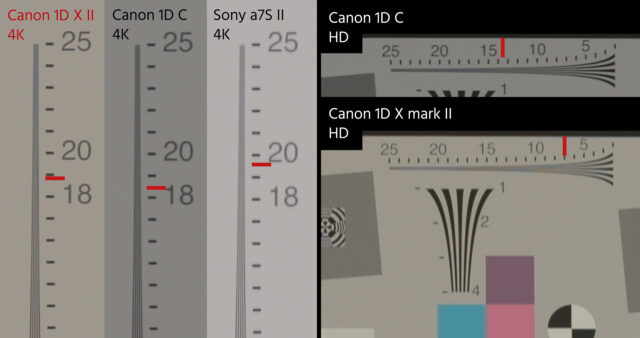 Here is a blown-up shot of a tube test chart, in which the fine lines get closer and closer together to show when aliasing kicks in. In other words, it serves to analyse the point where sensors can no longer resolve detail correctly on the vertical and horizontal axis. What we see is that the Canon 1DX mark II resolves similar fine detail as the Canon 1D C, possibly slightly better and is also very close to the Sony aS7 II. In terms of compression, the Canon cameras are much better than the Sony. The Sony a6300 would be more in line with Canon in terms of compression artefacts.

Unfortunately, the HD mode of the Canon 1D X mark II is really disappointing. Aliasing is strong and the image is very soft. It can hardly be considered an HD image and is barely suitable for an old tube television. The Canon 1D C, on the other hand had a S35 crop mode that delivered a very nice HD image.

There is not much more to be said: the image of the 1D X and 1D C look very much alike. But with a proper Cfast card, the Canon 1D X mark II supports up to 60p 4K video, which probably makes it the only usable DSLR capable of 4K video in 50p or 60p. Other cameras that support higher frame rates are the Sony FS7 or Blackmagic URSA Mini 4K. The 60p video of the 1D X has no quality loss over normal frame rates.

The Canon 1D C suffered from a very severe rolling shutter effect (A phenomenon also referred to as “jello”). Fortunately, the Canon 1D X mark II performs better here. Twice as good, in fact, making the 1D X mark II’s 14ms of rolling shutter performance one of the best among 4K DSLRs, alongside the Panasonic GH4. 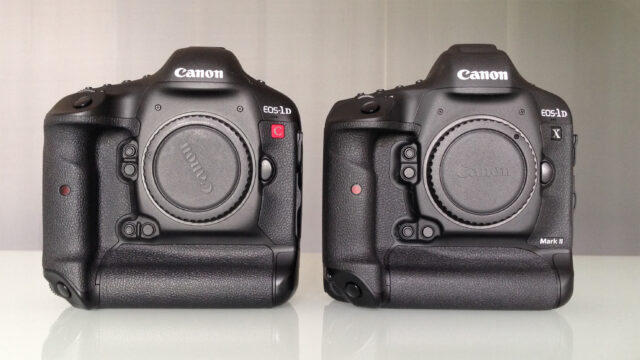 If you thought that the Canon 1D X mark II was Canon’s next big failure in terms of video, then you would be wrong. With a beautiful image, good quality codec, good lowlight performance and good rolling shutter performance, as well as 50p and 60p video modes in 4K and good autofocus, the 1D X mark II is surely a camera to consider for the video and film enthusiast.

However, if you thought the Canon 1D X mark II was the next step in video evolution after the Canon 1D C, then you’d be disappointed. It looks as though the video features of the 1D C have been carried over to the 1D X mark II, the valuable log gamma was left behind and HD mode is now useless (Why, Canon, why???). At the end of the day there is little difference between the two cameras.

In summary, the Canon 1D X mark II is a good video shooting camera and considering its current price tag of $6000, it is certainly more affordable than the 1D C priced at $8000. So if you want 60p video at 4K, or good rolling shutter performance with overall great image quality in an APS-C sensor (crop of the camera’s full-frame sensor), then this camera might be worth the money. Photographers who are also into video will certainly appreciate the Canon 1D X mark II.

However if you just want a great 4K camera, then those $6000 might be better spent elsewhere. Maybe on a more ergonomic, video oriented camera that also offers HD, or even the Sony a6300 (review here), which can get you to 4K wonderland for under $1000.

For more on the 1DX check out: Johnnie’s hands-on Canon 1DX 2 review