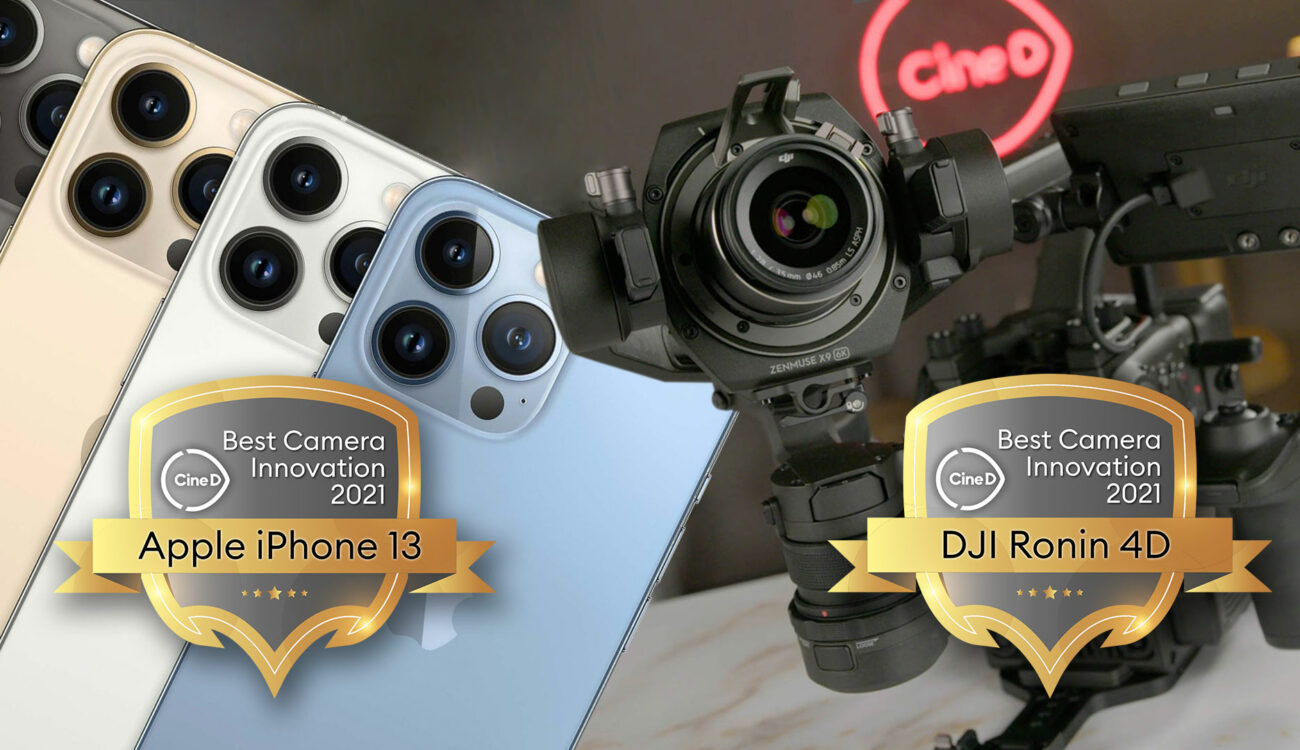 2022 is just getting started, yet it’s still time to look back at the camera innovations of the year 2021. Cameras have become tremendously better last year, but in terms of real innovation, two products stood out for us. These are the CineD Best Camera Innovation Awards 2021.

To me, the camera industry has always been a strange one … on one hand, there has been an incredible amount of technology innovation going on within those devices over the years: Even mirrorless cameras now offer super-high resolutions (now we have 8K full-frame mirrorless cameras, who would have thought …), autofocus that actually works well for video (something I wouldn’t have believed only a few years ago), internal RAW recording (and of course 10-bit 4:2:2 internal, which is more practical for my line of work of doc filmmaking, is something that was completely unthinkable before), IBIS, and much much more …

On the other hand, the cameras look more or less the same they did 15 years ago. Yes, in the compact form factor of mirrorless cameras we lost the mirror of the DSLRs, but then manufacturers seem to be trying hard to make those camera bodies larger again (Canon R3, Nikon Z 9 …), so they end up having the same size as before. In general, not much about the basic principle of those cameras – also the larger, “professional-line” video cameras – has changed. You still need to rig them up (even more than before) in order to make them work in various circumstances of shooting, and while shooting, you still hold them the same way you have held your 5D Mark II 12 years ago, or much earlier.

For most traditional camera manufacturers (and that’s predominantly Japanese companies), the camera menus are still as convoluted and un-intuitive as they’ve always been: endless lists of text, functions buried in sub-menus over sub-menus, more confusing with every generation of cameras because more functions are added to an ageing camera concept. And the menus are just one example, but it goes much further than that.

Innovation with traditional cameras is definitely there, but it’s in the details – the established brands shy away from taking a step back and re-visiting the entire concept of a camera.

Re-thinking the concept of a camera is overdue

Is it necessary to re-think the camera as it is? I think yes.

Younger generations are drifting away from cameras. I am not talking about ambitious up-and-starting filmmakers and photographers (there’s still enough of those luckily), but the “occasional” photographer/filmmaker is not buying a camera anymore. Tourists around the world, especially a Chinese middle class who now has the money to travel the world, are using their phones instead of cameras to document their travels. Phones have killed the compact photo camera and small-sensor camcorder markets, and they are starting to eat into entry level larger sensor cameras (DSLR / mirrorless) due to advances of computational photography and cinematography.

The traditional camera concept has not caught up with camera developments in smartphones – particularly how photos are processed in the device, how they can be edited and shared with the world instantaneously after acquisition. Yes, we can connect our cameras to phones now. But that is far from enough. Some “outsider” companies like Samsung and ZEISS have made steps into making “smart” mirrorless cameras powered by Android, but those efforts don’t seem to be continued by those companies.

The traditional camera manufacturers have not dared to re-think what a camera is yet. They are world-leading hardware manufacturers, but notoriously slow in developing software, it’s simply not “their thing”, and none of these companies seems to have seriously tried building a software division on par with their hardware development capabilities.

What happens is that the Japanese companies are losing ground to particularly American and Chinese companies. China produces around 600,000 engineers per year, far outnumbering the number of graduates of any other nation on the planet. While “made in China” used to be a frowned-upon slogan until a few years ago, it’s slowly becoming a quality seal (the same happened to “made in Japan” in the last decades of the 20th century – I still think of Back to the Future’s 1980s Marty McFly tell a bewildered 1950s Doc Brown that “all the best stuff is made in Japan”).

At the same time, US IT giants are commandeering armies of the best software developers, and cash-rich giants like Apple or Google have endless resources to make their products better. Better cameras in phones have become the main reason for many people to upgrade their smartphones as there’s little need for endless processing power in a phone for anything else than high-end games. When a company like Apple invests billions into development of their smartphone cameras, all the traditional camera companies combined can’t compete with the R&D budgets of such an IT giant. So even if their phone camera sensors and lenses are tiny in comparison, they might make up for that very soon by all the development dollars and resources pouring into computational processing of images.

So despite awarding two “outsider camera companies”, the two winners the CineD Best Camera Innovation Awards 2021 should come at no surprise: Apple for the iPhone 13 (Pro & Pro Max), and DJI for the Ronin 4D.

Let’s start with Apple: For years, we knew it was only a matter of time until their “Portrait Mode” (fake bokeh rendered by measuring depth in an image) would make it to the video function of their phones. And while other manufacturers have introduced similar functions, the iPhone 13 did it certainly most convincingly.

Don’t get me wrong, the so-called “Cinematic” mode is not perfect by any standards. Right now it’s only 1080p, and for some reason it’s 30fps (why would anyone think that’s “cinematic”, making it shoot at 24 frames per second should actually be easier??), but it’s a sign of things to come. The focus can be re-adjusted after shooting (because of course, all that “shallow” depth of field is really just image processing), as can the strength of the effect (“f-stop”), which opens up creative possibilities, and it does a remarkably good job at rendering borders of subjects – yes, hair is still sometimes a problem, but that got better with every generation of the Portrait Mode too. In a few generations from now, we will have a hard time determining the difference between “real” shallow depth of field and its fake sibling.

Of course, Apple also added ProRes recording to the iPhone 13 Pro and Pro Max, as a sign how seriously they are taking video acquisition in their phones. It’s weird that it’s only ProRes 422 HQ, which is incredibly data-heavy (and relatively unnecessary, ProRes LT is 10-bit color depth too). Processing within phones is now on par with quite powerful laptops (which is why Apple’s M1 processor is such a huge success in their macOS systems), and soon, the SoC designs like the M1 will be a more important factor in rendering image quality than the size of the camera sensor alone.

We award Apple our Best Camera Innovation Award 2021 for the iPhone 13 , because it is a sign of things to come with regards to computational cinematography.

We talked about the amount of engineers China produces every year earlier in this article – and DJI as a company is definitely one of those Chinese leaders which manages to attract the best talent for their new products.

Before the Ronin 4D, DJI’s claim to fame came from particularly two areas: maker of the most advanced drones in the world, and creator of some of the most popular gimbals. They weren’t known as a “camera maker” apart from the cameras inside their drones and their attempts at action cameras. But with the Ronin 4D, they took everything they learnt from their other products and it culminated into something entirely new and truly revolutionary. (Watch and read my extensive review of the Ronin 4D here, in case you missed it!)

So it came as a much bigger surprise when they announced the Ronin 4D, a fully-featured full-frame 6K/8K camera with a built-in gimbal and fourth axis suspension arm to get rid of any vertical shake while walking / running / driving. It would be short-sighted to reduce the device to its vertical axis arm, because it holds many more daring revolutions: the built-in ProRes RAW recording is great, but probably one of the lesser impressive novelties.

The Ronin 4D has a revolutionarily good LiDAR autofocus that can turn all kinds of manual lenses into face-detecting autofocus lenses, and an “Automated Manual Focus” that allows you to manually override the autofocus. It’s hard to explain but intuitively works so well that it might put some focus pullers out of a job (and I don’t throw that around lightly).

Remote monitoring and control is deeply engrained into the device as well, with an inexpensive wireless module adding 6 kilometers of reach with close-to-zero latency, something you have to pay big bucks for in a separate Teradek module for almost any other camera (… except for DJI drones).

And as if it was nothing, they built up to 9 stops of ND into the Ronin 4D’s tiny X9 camera module (haven’t other camera manufacturers told us for years that mirrorless camera bodies are “too small” to house built-in NDs? They are all MUCH bigger than the X9!!), and interchangeable lens mounts: DJI DL mount, Leica D-Mount and Sony’s E-Mount. Oh, and their camera menu is so incredibly intuitive, you are able to find almost all functions instantaneously. It’s simply incredible to see that this is a version 1 of an entirely new product category, and it’s very exciting to see what’s going to happen in future iterations of the Ronin 4D concept.

Because of pulling off several quantum leaps in camera technology at once, we award DJI our Best Camera Innovation Award 2021 for the Ronin 4D. We can’t wait to see what cameras will look like in ten years from now, thanks to the Ronin 4D shaking up the very concept of what a professional camera is.

What do you think about our selections for the CineD Best Camera Innovation Awards 2021? Let us know in the comments below!