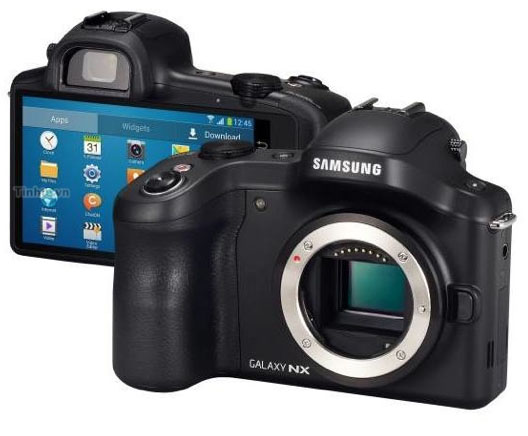 Now that’s a first for an interchangeable lens camera: Samsung just announced the Galaxy NX, which is powered by Google’s almighty Android operating system. (It’s not called DSLR because technically it does not have a mirror – although that doesn’t make any difference for filmmakers anyway!) I have said for a long time that cameras which allow the user to use a free ecosystem of software will be the winners in the long run, because then all that separates the hardware and the end user from “the best possible camera” is a mighty talented programmer (or a bunch of them). Magic Lantern prove what is possible through the hacks they’ve accomplished (especially the RAW hack for Canon DSLRs that we reported about extensively).

The Japanese camera manufacturers were never really strong in software, only hardware – and now it seems like the South Koreans are leading the way when it comes to programmable and customizable cameras. This relatively open approach is the future of camera technology, yet it remains to be seen how flexible programmers really will be when it comes to accessing all the camera’s different functions. Now wait a minute, some will say, Android? Yes, it’s originally been made for smartphones but by its (free) nature, nobody prevents manufacturers from powering other categories of devices with it. Samsung was the first to embrace that with the original Samsung Galaxy camera last year, but that only had a fixed lens and was therefore not really interesting for filmmakers.

The Galaxy NX however is an interchangeable lens camera with an APS-C sized 20.3 megapixel image sensor that also shoots 1080p video at 24 or 50 frames per second. Really Samsung? We need 25 frames per second over here in Europe and many other markets to actually be able to use this camera professionally. Please add 25p via a firmware update! Yes, it would be nice if a function like this could be enabled by a third party who’s developing for Android – but as it look now, the customization of the camera doesn’t go that far … yet. Let’s see where Android takes us!

Also, Samsung’s cameras are not at all established in filmmaking circles at all, they have a lot of catching up to do in our industry. Of course their proprietary NX mount lenses are necessary to be used on the camera – we are trying to find out if it will be possible to attach any other brand using an adapter. No word on its native sensitivity, but it can shoot up to ISO 25,600 (you know, it’s not as if you can usually actually use that). It comes with a touchscreen (actually pretty essential when running Android), the size is 4.3″.

Apart from Wi-Fi connectivity it comes with LTE, so believe it or not, you can now use Instagram, Facebook or Twitter right from your camera. Crazy times indeed!

We also don’t know anything about availability of pricing yet, but The Verge is speculating that it will fall “pretty close to $1,000 with a kit lens”, which doesn’t sound too bad at all.

Head over to Engadget to check out their hands-on with the camera.