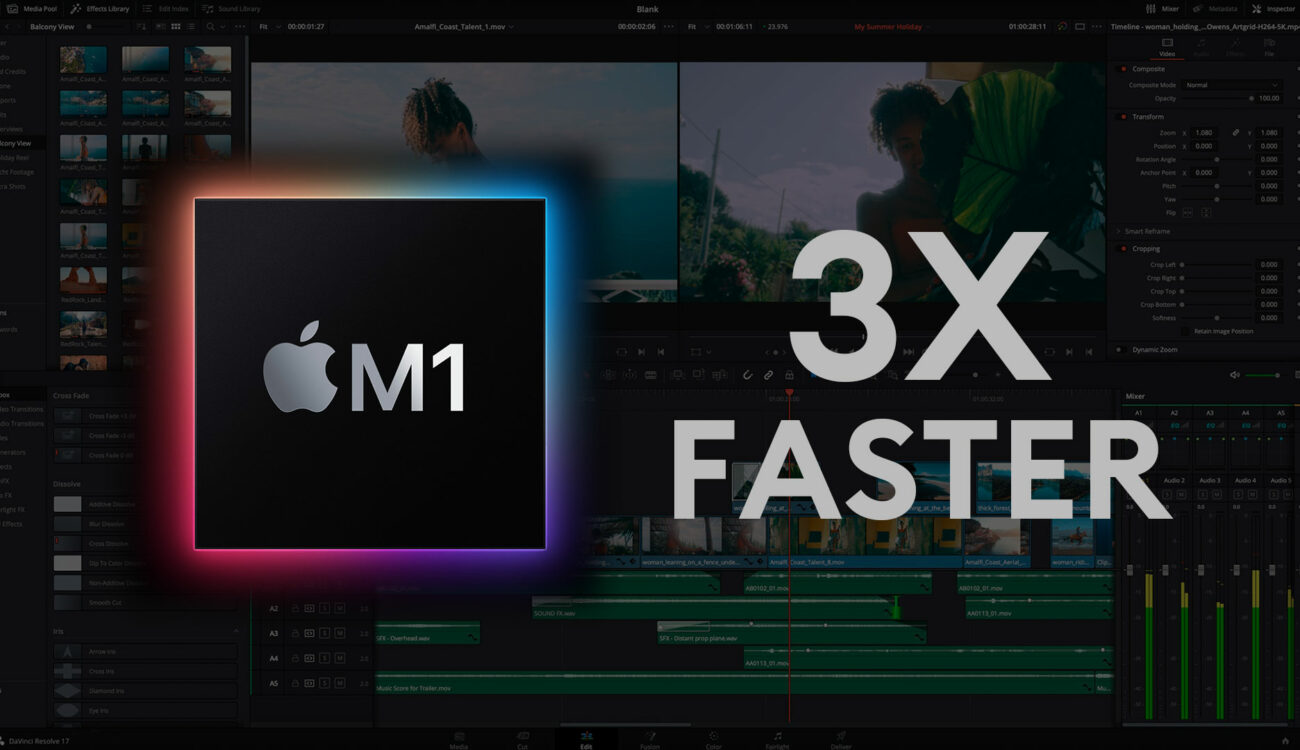 Blackmagic Design announced the new DaVinci Resolve 17.3 that promises to bring up to three times faster grading and editing in 4K and 8K on Apple M1 Macs and many more new features.

When Apple launched its M1-equipped Macs last year, Blackmagic Design’s DaVinci Resolve (apart from Apple’s own Final Cut Pro of course) was one of the first NLEs to provide a version specifically designed for the Apple Silicon machines. Now it seems that the Resolve development team has no intention of slowing down anytime soon. Blackmagic Design launched a new version of DaVinci Resolve 17.3 that promises to bring up to 3x faster editing and grading on Apple M1 Macs. Let’s take a look at the details.

DaVinci Resolve 17.3 – all about speed

The new Resolve 17.3 adds support for a completely new processing engine. That’s why it is possible to work faster on 4K and even 8K projects on Apple M1 Macbooks. Furthermore, the new processing engine uses tile-based rendering, which also gives users up to 30% longer battery life on laptop computers when working in DaVinci Resolve. DaVinci Resolve 17.3 also supports a new option on Mac computers with M1 for H.265 hardware encoding. Prioritizing speed versus quality when rendering, can further improve render times up to 65%. DaVinci Resolve will now also decode AVC Intra files using the media engine built into the Apple M1 chip, making decoding and playback faster when working with these file formats.

New Resolve FX controls have been added, such as new grid shapes and greater control when using mosaic blur, allowing customers to more precisely adjust the amount and appearance of pixelation. Keyer garbage mattes now have rotation controls for easier removal of unwanted items from view. New saturation and gamma controls on the glow plugin allow greater control and subtlety over lighting effects. Aperture diffraction in DaVinci Resolve Studio has new anamorphic aperture controls which allow a wider range of lenses to be emulated.

Fairlight audio also has improvements in latency with new drivers, better Fairlight export dialog that allows including clip levels, fades, EQ and effects, or iXML metadata as well as being able to normalize clips to match different loudness standards. There are many more new features – you can check the following list of improvements.

As always, the latest version of DaVinci Resolve is available now as a free download from the Blackmagic Support Center. The full Studio license of DaVinci Resolve 17.3 is also available on the same page, but you will need to purchase an activation code in order to launch it. The full license for two computers costs currently $295, but you can also get a free Blackmagic Speed Editor (check our review here) with the purchase. The Studio license also comes with all new Blackmagic Design cameras.

Do you use DaVinci Resolve on Apple M1 Mac for your post-production work? What do you think of the new 17.3 update? Let us know in the comments section underneath the article.