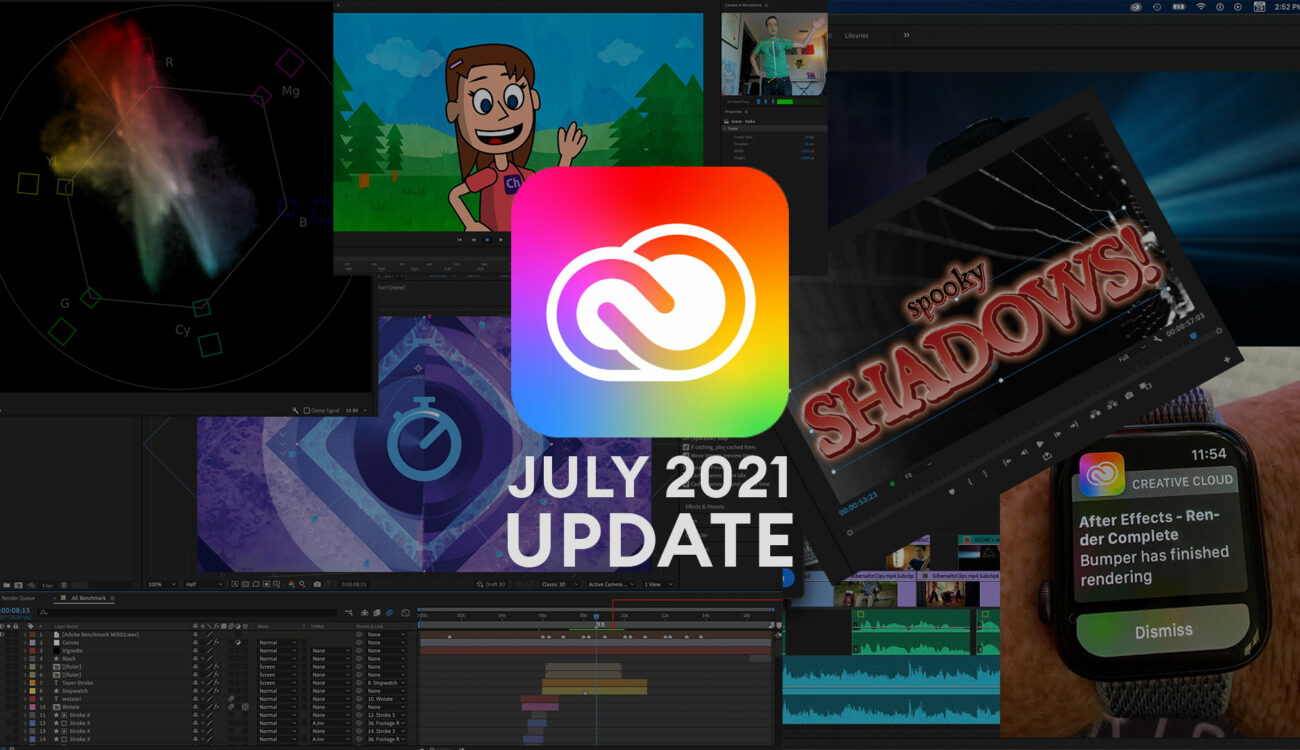 After releasing the Premiere Pro Public Beta last month, Adobe is now releasing some new features to its Creative Cloud video post-production apps. This July update includes the NLE Premiere Pro, Media Encoder, After Effects, and Character Animator. Let’s take a look at what is new.

According to Adobe, videos with captions are better for SEO as they rank higher in search results. With the new feature Speech to Text in Premiere Pro 15.4, Adobe wants to make the process of creating captions much faster and easier. As its name implies, the feature simply transforms spoken text into captions. As Adobe states, the new feature cuts the time needed to create transcription and captions by approximately 75% (according to Pfeiffer Report). Additionally, there is now a new way to search and navigate video sequences – double-click on a word in the Text panel, and the playhead moves to that position in the Premiere Pro timeline.

The new Premiere Pro 15.4 offers more updates. There are new titling and caption styling tools such as the ability to add multiple shadows to text layers, the ability to change attributes of text backgrounds, and expanded font substitution with support for 28 different international alphabets.

Users can now upgrade legacy titles. They can be converted into Source Graphics within the Premiere Pro projects. Source Graphics are displayed in the Project panel, where users can track and sort them like any other project item.

Premiere Pro 15.4 also introduces label colors and clip names that change the source media on the project panel which can be useful when working on productions. There are also some new color improvements such as tetrahedral LUT interpolation that offers a more precise interpretation of color information for better consistency when grading footage with difficult lighting conditions, such as strong shadows and highlights in the same shot and reducing the chances of introducing banding during post-production. Adobe also brings colorized vectroscope in Premiere Pro (Beta) that provides more detailed image analysis for color grading.

Last but not least, Adobe claims the new Premiere Pro brings some performance improvements such as faster scene detection, automatic audio device switching. The CUDA and OpenCL support on macOS is now discontinued. Team Projects workflow got faster as well.

The M1 Macs from Apple introduced a different CPU architecture (ARM) than what Intel or AMD CPUs use (x86). That’s why M1 Macs users can either run regular x86 apps over Rosetta emulation or use the native M1 versions that, of course, offer better stability and performance. While some apps had the M1 version ready almost at the launch, other software companies need a bit longer.

Adobe started releasing the native M1 Mac versions of its video apps in April 2021 with the Premiere Rush and continued in May with Audition. This July update brings native M1 support for Premiere Pro, Media Encoder, and Character Animator. According to Adobe, After Effects will get the native M1 support in the Public Beta version later this year. The good news is, that After Effects integration features within Premiere Pro, such as Dynamic Link and Motion Graphics templates, have already been optimized for M1 Macs. Adobe states that with native support for M1 on Mac, Premiere Pro runs nearly 80% faster than comparable Intel-based Macs.

Body Tracker feature (in Public Beta) now makes it possible to animate the puppets in the app by using your own body movements and gestures. Users can simply move their bodies in front of a camera and the puppet will move along with them.

Puppet Maker (Public Beta feature) enables quick and diverse character creation for basic users. There are no Photoshop, Illustrator, or rigging skills required. Users can choose from a variety of character styles and then customize them with hairstyles, skin tones, accessories, and more via a simple interface.

Do you use Adobe Creative Cloud video apps for your work? What do you think about these new features? Let us know in the comments section underneath the article.