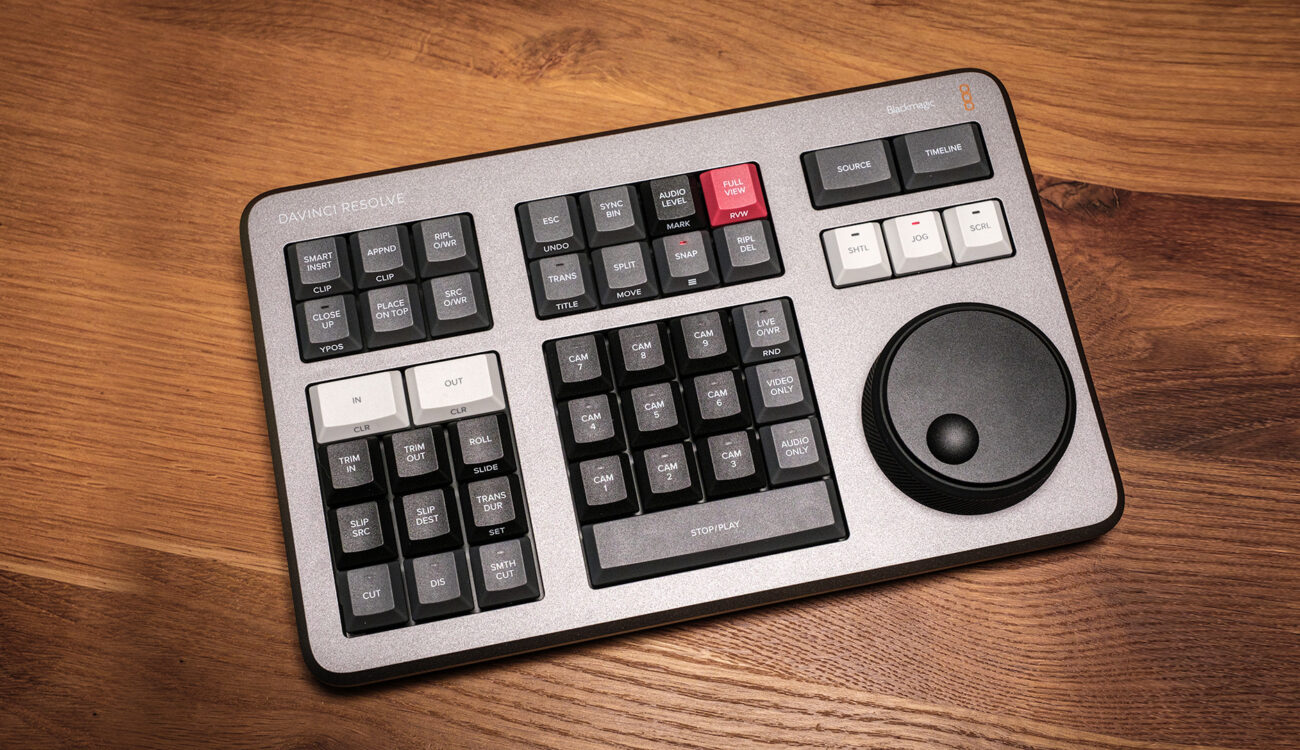 When Grant Petty introduced DaVinci Resolve 17 recently, he also demonstrated a new editing controller device, the DaVinci Resolve Speed Editor. Blackmagic Design was kind enough sent us a loaner unit. I had the pleasure of using it for close to two weeks. Let me share with you what I think about the device.

What is the Speed Editor?

The DaVinci Resolve Speed Editor is a specialized keyboard (also called a controller). It puts a lot of functionality on dedicated keys and a wheel. The controller is supposed to be used alongside a regular keyboard or laptop. The device is designed to speed up your editing workflow by putting frequently used functionality on dedicated keys and the beforementioned dial.

The lightweight device is roughly 25cm x 16cm in size. Despite the metallic look it’s casing is made out of injection-molded plastic.

43 keys — some of which have LED status indicators are arranged in five logical groups or sections. Some buttons have secondary functions that can be accessed by double-pressing and/or holding. A Jog/Shuttle/Scroll wheel sits in the bottom-right. The metal dial turns buttery smooth and has a nice weight to it that makes using it quite pleasing. You can bump the wheel and it will keep spinning for a while, because of it’s momentum — very nice.

There is no haptic feedback when you switch the wheel to SHTL (shuttle) mode like in some similar controllers. This makes it hard to find the “neutral” or “pause” position of the wheel, as well as gauging how fast forward or backward you are going. However, a little indicator beneath the viewer appears ins SHTL-mode and tells you which way you are going and at what speed. I guess the haptic feedback feature fell victim to bugetary constraints. Unfortunately this makes the SHTL-feature a bit fiddly to use.

Note: SHTL (Shuttle) is basically what JKL functionality tried to emulate in most NLEs

The buttons have a long key-travel and are easy to feel, which reminds me of using old PC keyboards or even the legendary Sony BVE-900 A/B Edit Controller on which I started editing in the early 90ies. (I’m dating myself there, I know, but what the heck.)

While long-travel keys might be unfamiliar to people using modern laptop keyboards, it is actually very satisfying to be able to literally “punch”-in your IN and OUT points. Longer travel also reduces erratic keystrokes.

Because the device is meant to complement a normal computer keyboard it needs to sit somewhere within easy reach. I used the DaVinci Resolve Speed Editor on a desktop computer with a standard-sized keyboard. What worked best for me was to put the edit controller between me and the actual computer keyboard. Because it’s not as wide as the normal full-size keyboard it was easy to reach around the Speed Editor, when I needed to use the normal “claviature”.

The device has a single USB-C port to plug it into the computer, but thanks to the built-in Bluetooth and battery, it does not need to be physically connected. That has an advantage: The cable does not get in the way when putting it in front of the keyboard. I charged the device overnight and did not have to charge it again for the 10+ days I used it. No idea how much longer it would have lasted.

No drivers need to be installed and there is no power switch on the device. I just opened the Bluetooth settings in System Preferences on my Mac, the Speed Editor showed as “DaVinci Keyboard”, I clicked “Connect” and that was it. When DaVinci Resolve is launched a few of the LEDs in the keys lit up and the controller simply worked.

There is no configuration or keyboard-mapping necessary (nor possible). All the keys have their function permanently assigned. The Speed Editor is solely built for DaVinci Resolve and does not function with any other software. This is not very likely to change in the future.

Make no mistake — before you gain any speed while editing with the Speed Editor (or any other control surface for that matter) you will edit way slower for a while. That is until you got all the keys and their functions programmed in your muscle-memory. Setting and clearing (double tap) IN- and OUT points is easy and using the SHTL/JOG/SCRL wheel intuitive. Doing more complex tasks had me pause and think more often than not. Tasks that would take me 2 seconds with a mouse, often took minutes to figure out with Speed Editor.

After using it for a while though it gets easier and easier. When I popped back to Final Cut Pro for a paid job, during the time I did this Review, I missed the controller! That told me I had broken through the “Learning Wall”. So be prepared to be frustrated for a while. No pain no gain, I guess.

Designed Specifically for the Cut Page

As Grant Petty said, while he demoed the controller, this thing is designed for the Cut Page. He did not lie.

While most Keys/Functions of the Speed Editor do something in the Edit Page most of the more advanced functions don’t make sense with the Edit Page’s traditional track-based timeline. The device works fine as a JOG/SHUTTLE, to set IN- and OUT-points and simple stuff like adding a transition. Finessing an already finished edit, by (with active Trim Edit Mode) moving through the edits and trimming them also worked. Although I had to lock a couple of tracks not to mess things up. Everything more complex has you reaching for the mouse and the normal computer keyboard. For me, that makes it largely obsolete in the Edit Page.

Who is it for?

If you use the Cut Page in Resolve to edit Multicam content all day long — the Speed Editor can be a real timesaver. You don’t need to take your hands off the Speed Editor to switch camera angles, add transitions, look for- and add cutaways, replace shots, and trim edits. It’s a joy to use under these circumstances.

It also works great in non-Multicam situations, if your workflow allows you to use the “Source Tape” mode on Resolve’s Cut Page. This is the feature where Resolve strings together all clips in a bin into a single virtual “Tape” and lets you navigate that without having to open individual clips.

I grew especially fond of the RIPL O/WR (Ripple Owerwrite) function: switch to SOURCE mode, set your IN and OUT points and press RIPL O/WR – the timeline-clip under the playhead gets replaced by the source-clip and the other clips rippled accordingly. This is awesome to quickly try out stuff.

If you are working predominantly in one of the other Resolve Pages, the Speed Editor not a device you need. Functionality is more or less reduced to navigating the timeline with the wheel, play/pause, and setting IN/OUT points. Most other functions are too specific to the Cut Page to make sense anywhere else.

I’m editing in one way or another since my career started in the 90ies and I have tried many an editing controller-device in the past, but I ditched all of them. Some faster than others.

I am a keyboard-shortcut person and barely reach for the mouse if I can help it. Switching my hands between three input devices is too confusing for my simple mind.

That being said, I can tell right now, I’m going to miss the Speed Editor in some situations. Especially in the early stages of an edit, when scrubbing through tons of footage and quickly banging together the first rough cut.

If you want to see the Speed Editor in action, check out the DaVinci Resolve 17 presentation:

I did the DaVinci Speed Editor Review using Beta 1, 2 and 3 of Resolve 17. Things in regard to the Speed Editor might change, when the final version is released.

For example the SHTL/JOG/SCRL wheel’s behaviour in the Color Page was improved in Beta 3 already.

I think it would be great if Blackmagic Design could add the possibility to map your own commands to the keys especially outside the Cut Page of Resolve. The device could be much more useful for more people.

Let us know in the comments, if you are interested in the DaVinci Resolve Speed Editor. If you already got your device — drop us a line about your experience with it.