DJI just announced the Mavic Air 2, its new generation of the popular consumer drone, which boasts 4K 60p video at 120Mbps and 1080p at up to 240fps slow motion, 48 Megapixel photos, 8K Hyperlapse function, a fly time of up to 34 minutes and enhanced autonomy features, and more. Let’s check it out!

The original Mavic Air was launched over two years ago, and at the time, I flew it in Monaco at DJI’s launch event, and it offered video images with less compression than the more expensive Mavic Pro (Mark 1), in a much cheaper package. 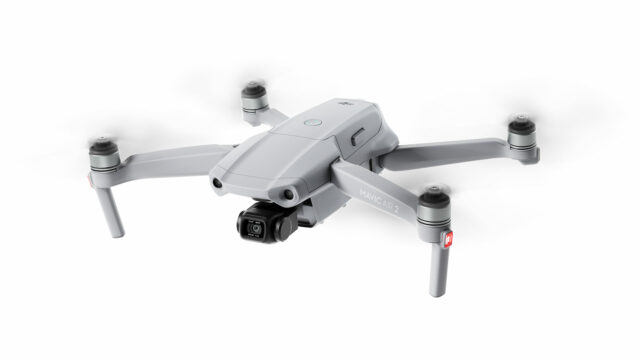 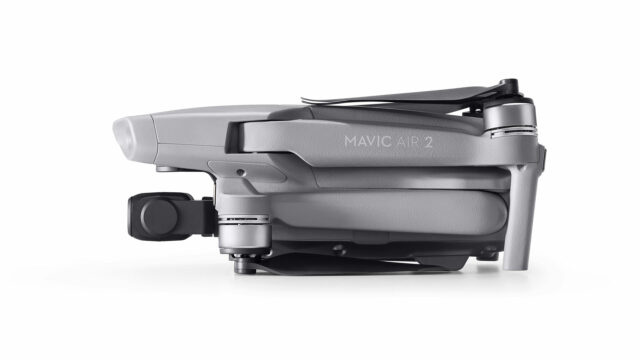 In fact, it looks like a shrunken Mavic 2 Pro – DJI have clearly taken the design from the Pro and compressed it into the Mavic Air 2.

I took the Mavic Air 2 to the skies and from first impressions, those images in 4K and 60p look amazing indeed. Apart from the apparent use of slow motion from 4K in 50p or 60p, you will also get less jittery fast pans when working on a 50/60p timeline of course. D-Cinelike is also available for better color grading to have a “kind of” log image, though it’s still technically only an 8-bit image. The drone can also shoot HDR video at up to 4K 60p.

Because of the fact that I had no fitting ND filters for the new camera designs for the test flights above yet, I had to use higher shutter speeds to get perfect exposure in manual mode, but that results in more jittery images. Having said that, just like the Mavic Mini, the Mavic Air 2 does a great job in Auto Exposure mode where you don’t actually see the shutter speed adjusting in changing lighting situations, so it can be used on occasion if no ND is available. 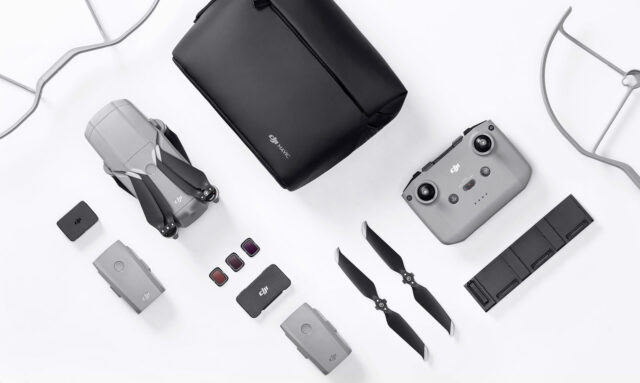 The “Fly More” Combo includes some ND filters for the first time.

For the first time ever, DJI is including a set of ND filters with the “Fly More” combo which also gives you 3 batteries, a carrying case, a car charger and more.

Compared to the original Air, the CMOS sensor is now bigger at 1/2 inch, and can shoot not only 12 Megapixel sensors, but also 48 Megapixel RAW photos in DNG format by using Quad Bayer technology. The resulting images are impressive for such a small sensor. 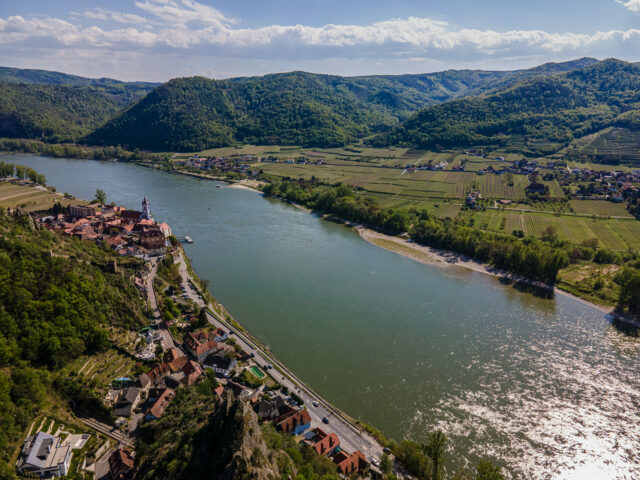 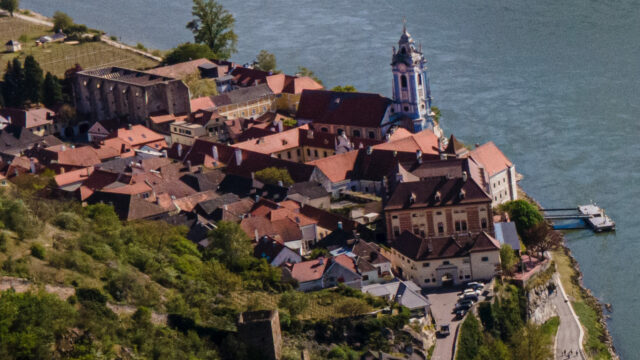 100% crop from the 48MP photo from the Mavic Air 2 above. Image credit: Nino Leitner / cinema5D

HDR photos are also available – the drone will take 7 different exposures of the same motive and combine them automatically into one.

A function called Hyperlight supposedly creates images with less noise in low-light scenarios by exposing multiple times and then computing and merging them into one image, reducing noise.

For enthusiasts, there is now also a Scene Recognition feature for photos which will recognise 5 different kinds of scenes, and optimize the photo settings for those: for example sunsets, grass, snow, blue skies and trees. 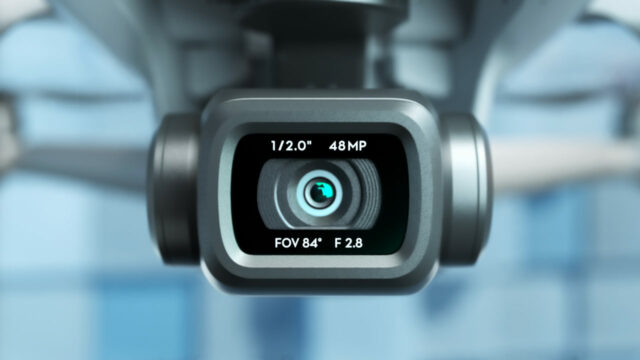 OcuSync 2.0 Transmission Instead of Extended WiFi

One of the downsides of the original Mavic Air was the image transmission technology between the drone and the controller. They used extended WIFI, which is not nearly as good in reach and responsiveness as DJI’s proper image transmission OcuSync.

The Mavic Air 2 luckily has OcuSync 2.0, and I can confirm it’s now just as easy and responsive to maneuver as the Pro series drones. The reach is up to 10 kilometers, but that is unrealistic because you are supposed to always keep the drone in your line of sight when flying. OcuSync uses two frequency bands on the Mavic Air 2 and switches automatically to the best signal.

The Air 2 also comes with a newly designed more ergonomic controller which mounts the phone on top, which I found much more comfortable to use than the older designs. Its battery capacity is also much increased, which was a problem on the older controllers. It is a bit more bulky but I think the downside of having a little more to carry is outweighed by the fact that it is now much better to hold and that it will last longer on a full charge. 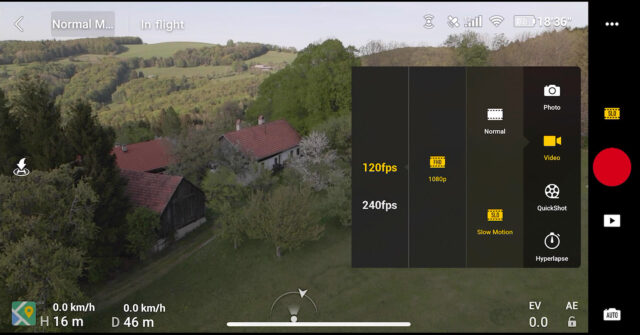 I am not actually sure why it’s important in a drone, but the Mavic Air 2 can also shoot up to 240 fps slow motion in 1080p resolution. This is definitely something to explore creatively, and it’s of course perfect for fast-moving sports scenes like surfing, for example.  The quality is quite noticeably lower when shooting in this mode, but we know this from all kinds of other cameras when high speed recording is enabled, as the same data rate has to be divided among a lot more frames.

Hyperlapse 8K is a new mode that allows for pre-programmed moving timelapses, which essentially stitches a number of photos into a video. Flight paths can be predefined, or the drone can also go in a circle around an object, for example. 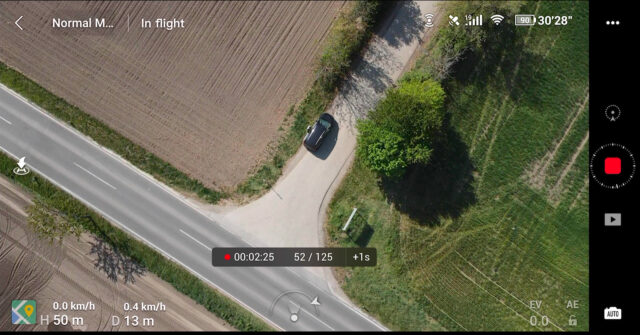 For fun and hobby drone pilots, the Mavic Air 2 of course also has the Quick Shot functions which we know from their other drones in the Mavic series, plus a new mode called SmartPhoto which automatically recognizes the kind of scene you are in, to automatically adjust the settings to the circumstances.

Flight Time: Up to 34 Minutes on 1 Battery

DJI claims a maximum flight time of 34 minutes which I wasn’t able to verify due to the windy situation I was flying in, where batteries drain much faster. But in any case, the flight time is more than sufficient. I still recommend buying the Fly More package of the drone which gives you three batteries in total.

The Mavic Air 2 also features improved autonomous flying modes that allow for better obstacle avoidance and object tracking. DJI claims that their Focus Track system on the Mavic Air 2 is the most advanced tracking system in any of their drones. It includes these three modes:

Active Track 3.0: Better mapping and much improved obstacle avoidance (that I have yet to test). DJI was very confident in this improved feature, it’s also supposed to recognize a subject again if it briefly gets lost behind trees (which was a standard problem with the earlier version of this).

Point of Interest 3.0: With this you can set a flight path around a subject – now it includes surface recognition to dynamically track subjects.

Spotlight 2.0: This is the first time in a Mavic series drone – Spotlight locks a subject in frame while the user has free operation of the drone’s movements.

From this first look at the Mavic Air 2, I can say that this is definitely a worth smaller brother to the Mavic 2 Pro and Mavic 2 Zoom. At about 800 dollars, it costs half of what the Pro costs and gives you video quality that is in some ways even better despite the smaller sensor, because of the better compression. And the biggest problem of the original Mavic Air – the Wifi transmission – has been solved by implementing a much more robust wireless transmission.

DJI proves again that they don’t shy away pushing innovation with every new drone, even if that means that this could somewhat cannibalize their existing drones. I’m looking forward to testing the Mavic Air 2 and all its functions even more, and I am almost fearing that in terms of technology, it will be better in some ways than my Mavic 2 Pro, for which I paid twice the price …

Get the DJI Mavic Air 2 at B&H (Buy links below), or, at DJI Store by clicking here.

What do you think about the Mavic Air 2? Is this the drone you have been waiting for? Let us know in the comments below.