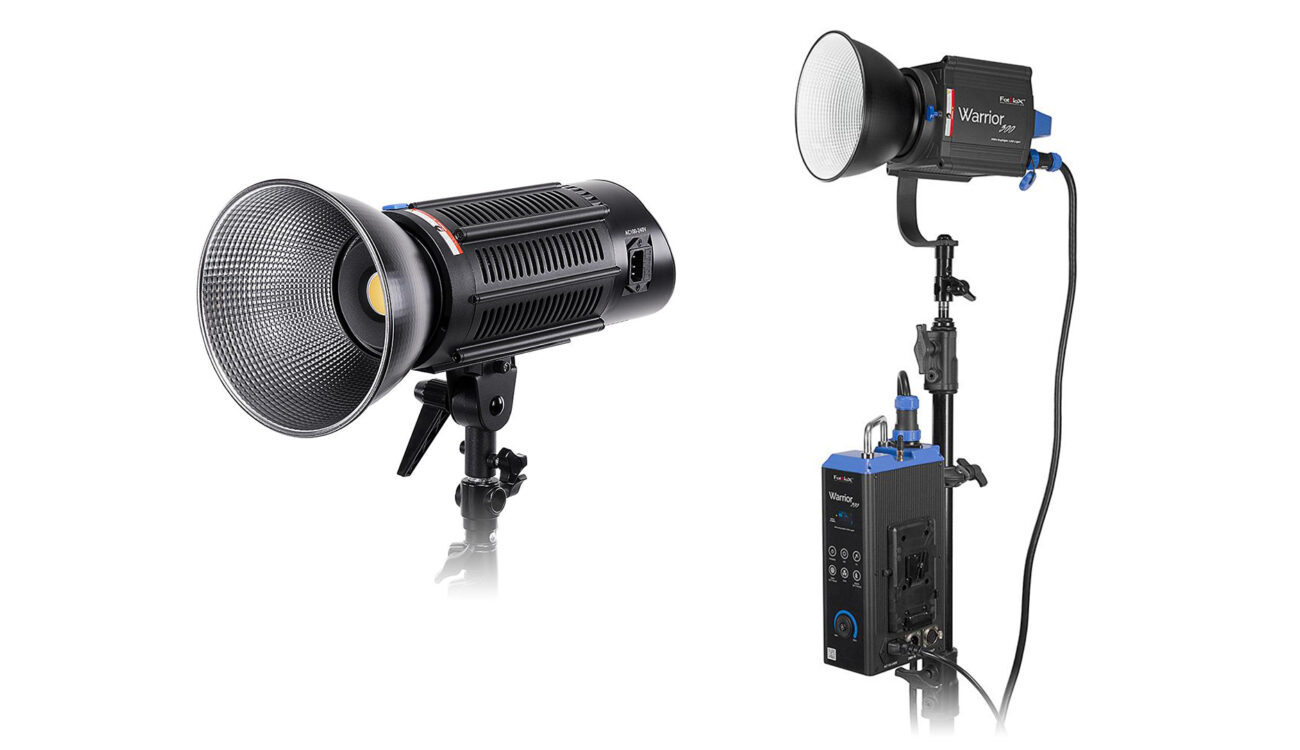 FotodioX recently released two daylight-only COB LED lights: the FotodioX Warrior 150 and the Warrior 300. These pretty compact fixtures have a color temperature of 5600K with a CRI and TLCI of 95. In addition, the fixtures feature a built-in Bowens Mount, you can control them via an included remote controller, and they have 11 built-in practical effects. Let’s take a closer look at them!

FotodioX is mostly known for making lenses adapters like their FotodioX Vizelex EF-L Adapter, allowing you to mount Canon EF/EF-S lenses to Panasonic L-Mount camera bodies. However, the company is less known for its LED lights lineup.

The latest FotodioX Warrior COB LED fixtures are the company’s most powerful lights to date, in a compact package and with a great price/output ratio.

Let’s start with the FotodioX Warrior 150, which, as its name suggests, features a 150W daylight (5600K) COB LED chip. In terms of output, the company claims that it can throw 16.600 Lux at 1 meter with the included reflector or 5.300 Lux without.

At the back of the light, you’ll find a small screen, an On/Off switch, and a knob to adjust your settings. Of course, you can dim the light from 0 to 100% via the onboard controller or the included remote controller.

According to FotodioX, the Warrior 150 has a CRI and TLCI over 95, which is perfectly acceptable. In front of the light, there is a standard Bowens S-mount so that you can adapt all your existing compatible light modifiers.

Like most LED lights, the Warrior 150 features a built-in fan to dissipate heat, even if the fixture is made out of metal. However, the fixture has “built-in NTC temperature detection to automatically control the fan and prevent overheating to ensure a long product life,” according to FotodioX, so I’m not sure you’ll be able to force the fan off if needed.

There is a standard IEC connector on the left side of the light to run it on AC power. Indeed, the Warrior 150 has a built-in power supply so that you can plug it directly to mains power without the need for a ballast.

On the right side of the Warrior 150, you’ll find a 4-pin XLR power connector. If you want to run the light out of a V-Mount/Gold Mount battery, the FotodioX Warrior 150 comes with a 4-pin XLR to D-Tap cable.

The FotodioX Warrior 300 has a lot of similarities with its little brother: it is entirely made out of metal, it is a daylight-only (5600K) fixture, it features a Bowens S-mount in front of the light, it has a built-in fan and 11 pre-installed effects. So what’s different?

First of all, the FotodioX Warrior 300 is a 300W LED light, so it is much brighter at around 37.300 Lux at 1 meter with the included reflector and 11.800 Lux without, which is more than double what is little brother is capable of. Moreover, the CRI/TLCI of the Warrior 300 is over 96, according to FotodioX.

Also, the power supply of the Warrior 300 is not built-in to the fixture, so you’ll need to plug the light head into an external ballast. On the ballast, you’ll find the AC power input (IEC), DMX input and output ports, a control dial and control panel, an LCD screen, an antenna, and the DC output socket. You can run the light from mains power or via two V-Lock batteries.

What do you think about these new FotodioX LED lights? Do you prefer using bi-color/RGB LED lights? Don’t hesitate to let us know in the comments down below!