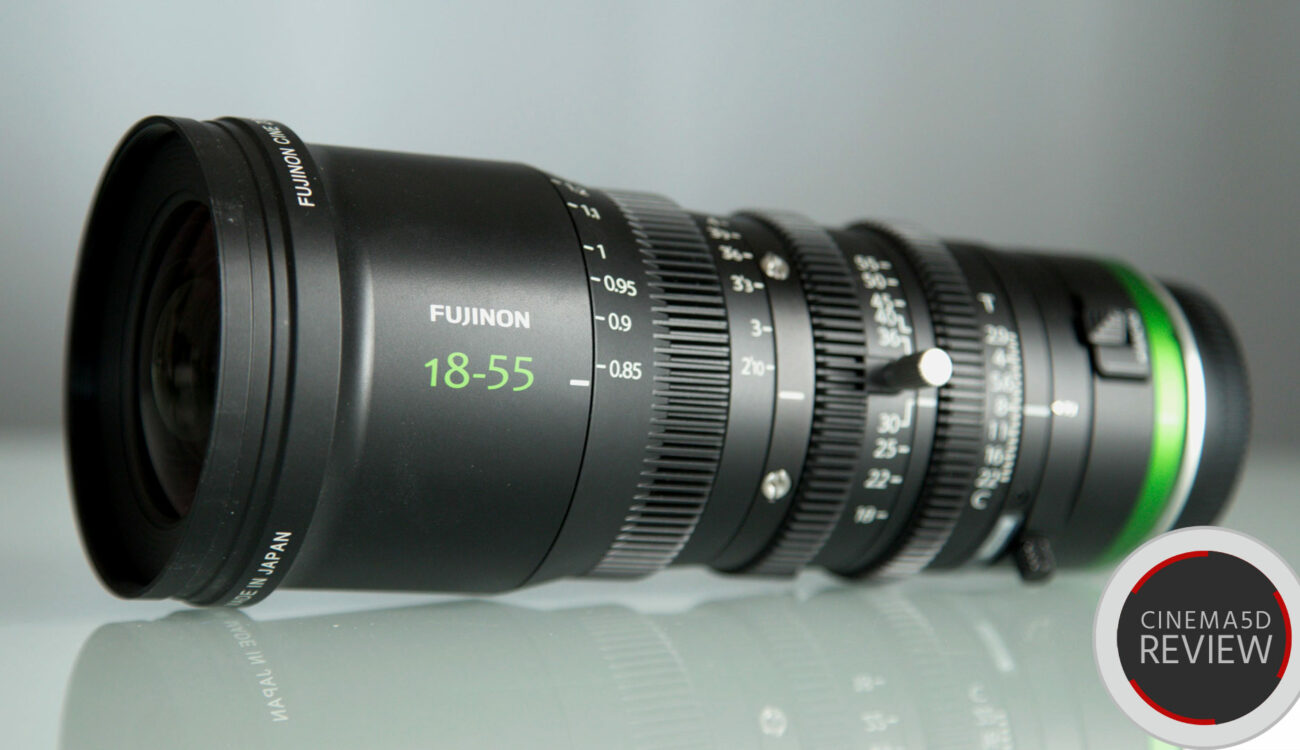 FUJINON just introduced a new line of affordable E-Mount Cine Zooms made for documentary-style cine shooters. The FUJINON MK18-55mm T2.9 is the first of two complimentary zoom lenses and it’s already on our test bench – here’s our FUJINON MK18-55mm Review. 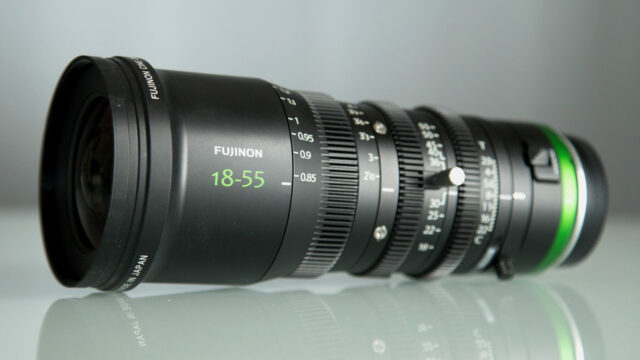 Why is this Lens Interesting for Cine Shooters?

First of all, let’s look at why this lens is interesting for us! For many years, large-sensor video shooters have been forced to use photo lenses with our Canon, or Canon-adapted large-sensor cameras. As many of us shoot documentaries or documentary-style projects, using photo zoom lenses has been a real frustration as they’re designed for photography, meaning they have a short focus throw, no hard stops, no manual iris control, clunky zooming, breathing, are non par-focal… the list goes on, as these are considerations that aren’t really relevant for shooting still images. Only recently manufacturers have finally started delivering zooms that are fit for video production and are not as heavy on the lens barrel and the wallet as high-end cine zooms. The Sony 28-135mm was the first of its kind (reviewed here), Canon was next, and now FUJINON is the one to catch our interest.

The FUJINON MK 18-55mm T2.9 should be interesting for documentary-style large-sensor shooters because it answers many if not all concerns we have with photo lenses:

For now, the FUJINON MK 18-55mm T2.9 comes in native E-Mount only, suitable for all those popular large-sensor Sony cameras we’ve been seeing in the last two years. Another limitation worth mentioning right away is that the new FUJINON Cine Lenses will only cover a Super35 / APS-C image circle, meaning that they are not suitable for full-frame cameras without using some sort of sensor-cropping mode.

Read on for our FUJINON MK18-55mm Review from the Lab:

In reality, this lens is (almost) breathless. While focusing, the FUJINON MK 18-55mm T2.9 holds its promise of maintaining close to a stable image. Other lenses breathe a lot more when you focus, making it seem as though you were zooming in or out while racking focus. This is generally unwanted in video and film productions, and a feature that FUJINON decided to master with this lens. Pop on any photo lens and try for yourself if you get the breathing effect. Then look at how the FUJINON performs:

The example above demonstrates a complete turn of the focus ring range at 55mm, which gives us the strongest out-of-focus effect. There seems to be very little focus breathing indeed, at least not one that I could discern easily. I also tested other focal lengths and there was no noticeable breathing at all.

Here’s another example, taken from Johnnie’s review of the lens. Make sure to check out the nice film he shot on it: 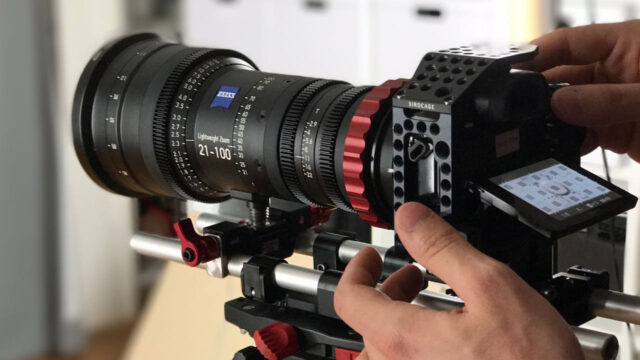 Testing the Zeiss LWZ.3 on the Sony a7S for reference. 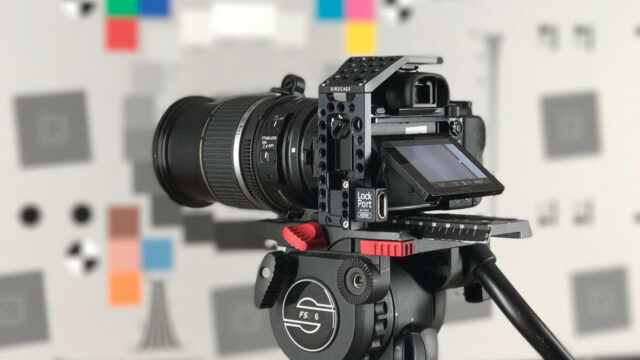 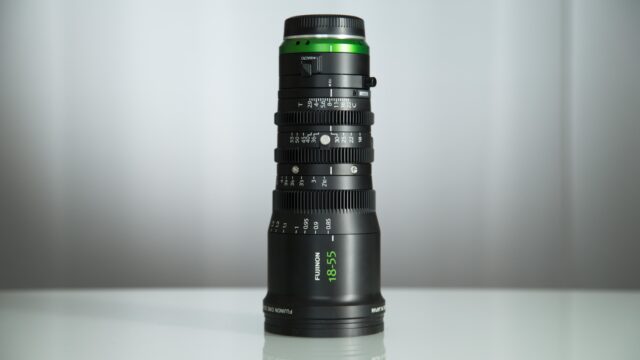 Personally, I’m not a big fan of getting the sharpest lens at any cost. In my opinion, many photo lenses have great sharpness and you can achieve a lot with them if you’re willing to accept their downsides. That said, I must say that in the world of 4K, many photo zooms are best left behind. At cinema5D we really do work with a lot of gear and we really don’t care if it is cheap as long as it gets the job done. Fact of the matter is that if lens sharpness does becomes a factor, then the better our camera’s quality becomes. 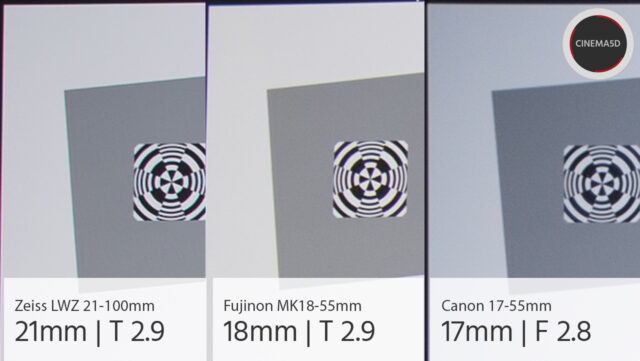 This is the corner sharpness at 18mm with a wide open aperture. As you can see, the FUJINON holds up brilliantly against the more expensive and narrower Zeiss  LWZ.3 21-100mm T2.9-3.9. We can see the Zeiss is still slightly sharper here at 4K resolution, while the Canon’s softness is apparent.

For those of you who are interested in the actual numbers, our testing software spit out the following: 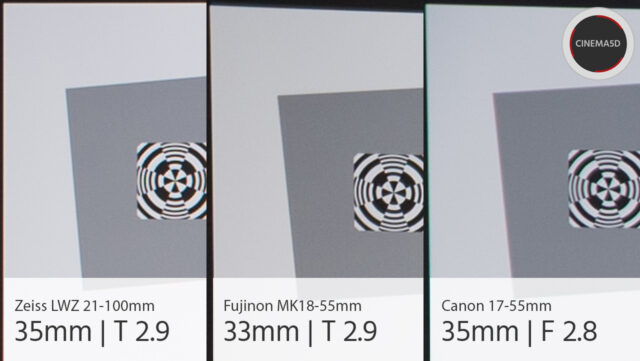 We get a similar result at 33mm/35mm. The performance of all three lenses becomes slightly weaker at this focal length, but the relationship to each other in terms of quality stays the same. 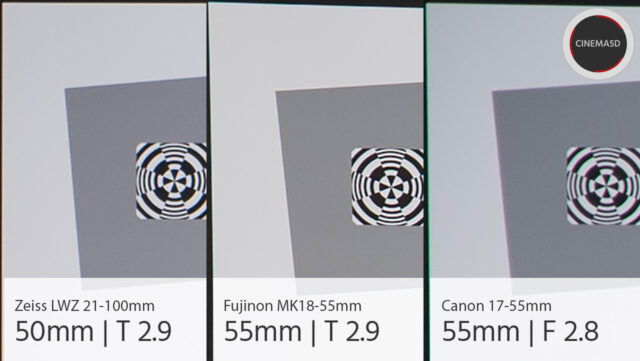 The more technically-minded readers might criticise that I compared the lenses at slightly different focal lengths. I admit I should have been more consistent, but I was personally more interested in getting a reference and not make a pixel peeping contest, so I decided to get the exact middle focal length of the FUJINON and Zeiss, and matched the Canon accordingly. I think we still get a very clear picture of how the lenses perform and compare.

Clearly the Zeiss  LWZ.3 is the sharpest lens, and probably remains sharp at even higher resolutions than 4K. The FUJINON still impressed me, though. It has very consistent sharpness from corner to center throughout the entire range, literally at any T-stop, any focal length and in any part of the frame. That’s certainly good to have. The Canon clearly lacks behind. The overall image was ugly in comparison to the other two lenses, and while not soft in the very center, the visible corner softness extended to a large portion of the image.

These test images also reveal Chromatic Aberration performance, i.e the ugly fringing colours on contrasty edges. Surprisingly, the FUJINON had very little noticeable chromatic aberration. Even the Zeiss exhibited more of it in certain instances, though this is quite normal for a lens at a wide open aperture.

The following are the software analysis results:

Here’s another interesting test. In this part of my FUJINON MK 18-55mm Review, however, I’ll skip the comparison to the Zeiss and Canon lenses, because it would go beyond the already large scope of this article.

Sometimes vignetting can work as an artistic element that helps isolate the subject, but often it is unwanted. In general, a lens that has less vignetting is preferred, though I would personally consider this aspect to be one of the least important negative attributes of a lens. When I work with a lens, I generally simply want to know how much vignetting it exhibits when wide open, so here we go:

To get a feeling for how the vignetting on the FUJINON lens looks like at different apertures, here are a few animations:

Yes, the FUJINON MK18-55mm T2.9 Cine Zoom Lens has vignetting at a wide open aperture, but it only really plays a significant role at its more telephoto end. In wide angle mode, you will have a hard time finding it unless you’re really looking, but at 33mm and 55mm it is clearly visible.

For me, this kind of vignetting supports a natural image look. I want my image clean in wider shots, and for narrower shots I actually often use some vignetting in post. This is not always wanted, of course, but I would be disappointed if it were the other way around. Others may have other preferences.

Here’s the final test we’re performing in our FUJINON MK18-55mm Review – Lens Distortion. We want our lines to be straight lines, and many zoom lenses tend to bend and distort the image at different focal lengths. Let’s see how the FUJINON performs against the Zeiss and Canon once again for reference:

In numbers, the distortion is measured as follows:

Unfortunately, here’s where the FUJINON MK18-55mm T2.9 exhibits its biggest weakness in this test, whereas the Zeiss really shines due in part to its different focal range. There is barrel distortion evident at wider angles of the FUJINON, which turns into pincushion distortion starting at 33mm. Like most photo zoom lenses, distortion is apparent, which can be a problem in situations where you have straight lines in the frame, such as in architectural images. We see a similar, slightly weaker distortion on the Canon EF-S 17-55mm F2.8 lens.

We wish the distortion on the FUJINON MK18-55mm T2.9 was less, but let’s be realistic: a lens with edge-to-edge sharpness at 4K resolution with minimal chromatic aberration and a lightweight design has to have some kind of tradeoff too. 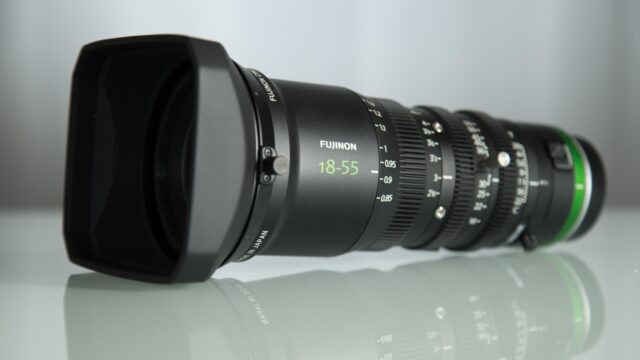 This lens will be a very welcome addition to the kit of many large-sensor Sony shooters. It is an ideal fit for cameras like the Sony FS7 or FS5, but will also look good on the Sony a6500. For those shooting with a Sony a7S or Sony a7S II, the image circle coverage is limited to Super35 sensor sizes. To get a slightly larger coverage, the FUJINON MK18-55mm T2.9 will also work with the Clear Image Zoom function at a 1.4x crop on those cameras.

That said, it is a pity that this lens only works with E-Mount for now. With the Panasonic GH5 in our hands and the nice performance of other Micro Four Thirds cameras like the Fujifilm X-T2 (review here) or Olympus (review here), we hope FUJINON will consider a MFT mount version soon.

Because as a whole this is a well-performing, lightweight cine lens that is ideal for documentary-style shooters, it has convinced us with the following attributes in our test:

It also gives us:

On the negative side, the only aspect to criticise about the FUJINON MK18-55mm T2.9 is its distortion at various focal lengths, which is similar to photo zooms.

Priced under $4,000, the FUJINON is very convincing. It could be a big step up from a photo zoom, and is a great offer when you look at larger cinema zooms usually priced at $20k and higher, or indeed versus the Zeiss  LWZ.3 21-100mm T2.9-3.9 that we used for comparison and which is also extremely affordable at $10k.

The current competitors to the FUJINON are Sony’s own Sony 18-110mm F4.0 lens, which has several pros and cons when weighed against the FUJINON, the new affordable Sigma Cine Zooms (check out our eview here) and of course the Canon 18-80mm T4.4 which we will be looking at in our next Lab test.

The FUJINON 18-55mm is available for pre-order now, and will be shipping in early March according to the manufacturer. Its companion lens, the FUJINON MK50-135mm, will also be coming later this year.