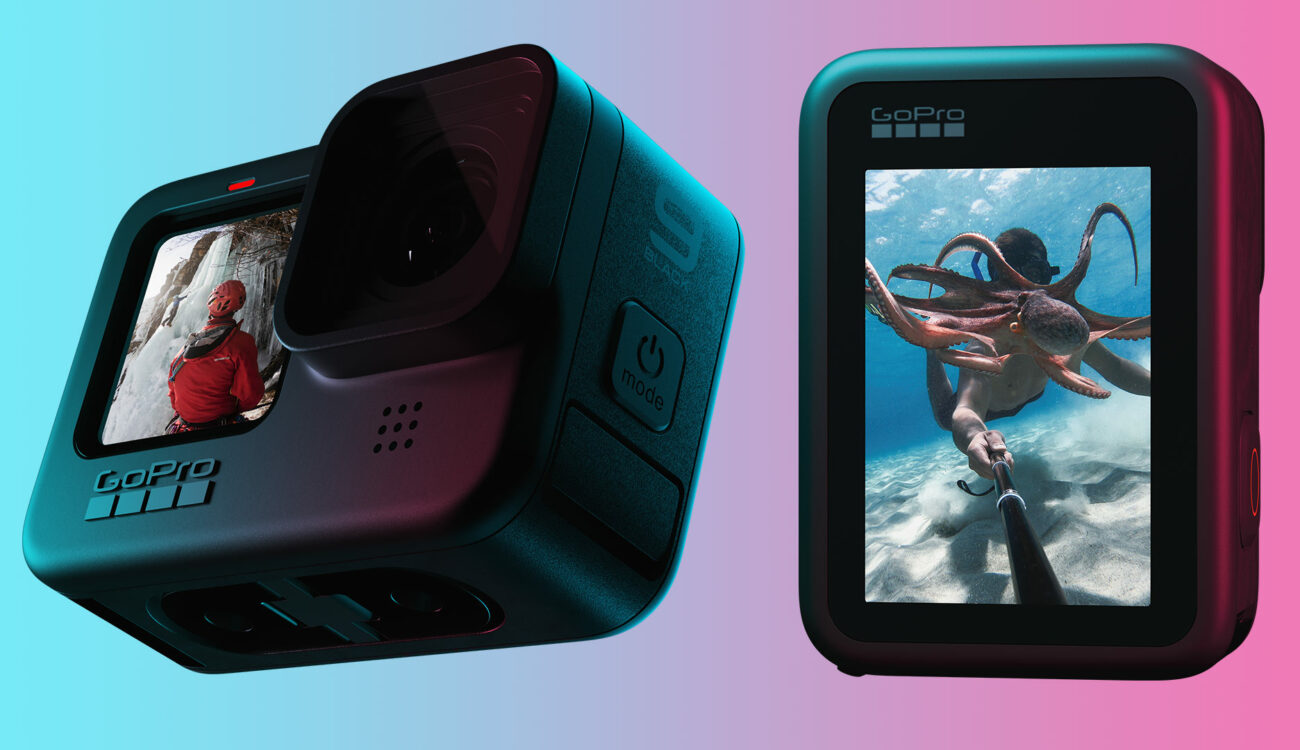 Head to our GoPro HERO9 Black review by clicking here

The autumn slowly begins again, which means that there is a new GoPro action camera – and this year it is the HERO9 Black. During the past few days, my colleague Gunther tested the HERO9 Black and compared it with the previous generation, Hero8 Black. Make sure to check his video review. Now, let’s take a look at the HERO9 Black features and specs.

The new GoPro flagship brings a new higher resolution image sensor that enables the camera to capture stills at up to 20MP resolution and video at up to 5K 30p. Other resolutions and framerates available for video are 4K60, 2.7K120, 1440p120, 1080p240 and more.

What is also new (and slightly resembles the DJI Osmo Action) is the 1.4” front color display with live preview and status modes. Filming in selfie mode can now be much more accurate. Furthermore, the rear touch display got larger and now has a 2.27” diagonal.

I think the biggest reason for the camera body growth is a larger battery. GoPro says that the camera now offers 30% more battery life than Hero8 Black and it has improved cold-weather performance. The battery grew from 1220mAh ( Hero8) to 1720mAh (HERO9) and it, of course, remained removable. As a GoPro user since the HERO2, I welcome this larger battery – short battery life has always been an issue with action cams in general.

GoPro says they also improved the stabilization. The HyperSmooth 3.0 in the HERO9 also includes in-camera horizon leveling. Another feature is the TimeWarp 3.0 with real speed and half speed.

The camera can capture RAW photos and it also has different FOV modes – so-called “digital lenses”. Voice control with 14 commands in 11 languages + 6 accents have been included as well.

Just like the Hero8, the new GoPro also has the built-in folding mounting fingers at the bottom. The naked camera body is rugged and waterproof to 33ft (10m). Skipped in the Hero8, the removable lens cover is back.

In the spirit of plastic reduction, GoPro is not packaging the HERO9 Black camera in the notorious (and useless) plastic box anymore. Instead, they ship it with a useful travel case. That is a good decision in my opinion. GoPro claimed that they are committed to doing the same with the rest of their cameras by the end of 2021.

GoPro announced the so-called Mods along with the launch of the Hero8 last year. These Mods are basically accessories that extend the usability of the action camera – Media Mod, Display Mod, and Light Mod. These will also be available for the new HERO9 Black.

The newly announced Max Lens Mod brings Max HyperSmooth video stabilization and low-distortion and ultra-wide Max SuperView to the HERO9 Black at up to 2.7K 60p. Max Lens Mod also allows for horizon lock even when the camera is rotated a full 360°.

HERO9 Black is available now and the retail price has been set to $450, or $350 with a one-year subscription to GoPro. Existing GoPro subscribers can also take advantage of the $350 pricing.

The Max Lens Mod is supposed to be available in October 2020 and it will cost $100. The Media Mod and Display Mod will cost $80 and the Light Mod will retail for $50.

On top of the $100 HERO9 discount, the subscription service, which now changes name from “GoPro Plus” to simply “GoPro”, offers unlimited cloud storage of GoPro footage, up to 50% on products at the GoPro online shop, and “no-questions-asked” camera replacement. The subscription costs either $50 per year or $5 per month.

What do you think about the GoPro HERO9 Black? Do you use GoPro or other action cams? Share your thoughts in the comments section underneath the article.