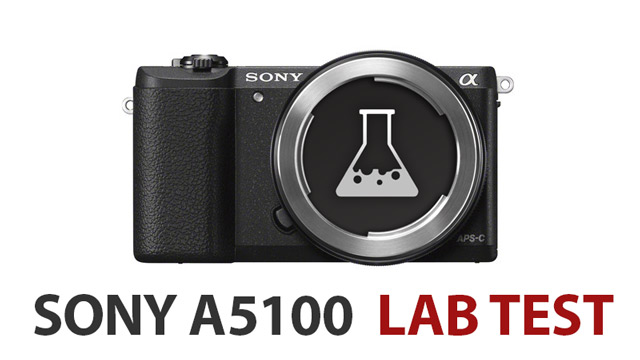 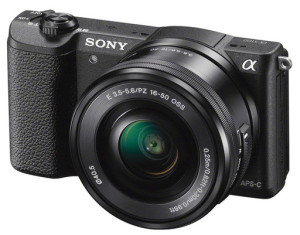 3 days ago Sony announced the new Sony Alpha 5100 mirrorless camera that has made some headlines on the film blogs as it brings the powerful new XAVC S codec as well as 1080p at 60 frames per second.

At cinema5D we already had this new camera in our test labs today and we have some interesting things to share. We tested dynamic range, rolling shutter and observed sharpness and aliasing.

What is the cinema5D test lab?
At cinema5D’s new test lab we accurately measure and evaluate the performance of cameras in a controlled testing environment. We are using precise imaging tools, techniques and software to measure each camera’s performance.

At $550 the Sony A5100 is indeed a “video camera” that looks quite interesting. After Sony’s success with the Sony A7S everybody’s wondering if the same intriguing video functionality can be found in the much smaller sized mirrorless successor of the Alpha 5000. Well let’s take a look.

Testing the dynamic range on this camera wasn’t easy. We didn’t have an official native ISO and looked at all ISO combinations ranging from ISO100 up to ISO1600 and measured each with different “Creative Styles” that would provide the best rendering.

Here is a chart that shows you dynamic range in comparison to other important cameras:

[UPDATE Aug. 22 ’14:] These test results are the exact numbers the software IMATEST provided in our test at a signal to noise ratio of 1/0.5 in the camera’s respective resolution and compression. Many factors influence these numbers and each sensor has its own characteristics. At this point we want to emphasise that these numbers differ from the subjective opinion we have about the camera, which for us at cinema5D is a very big point as we want to give you an ideal understanding of what the cameras can actually do for you. So we decided to mention it here. Subjectively, in comparison to the other cameras the maximum rating we would give to the Sony A5100 is 12 stops.

[UPDATE 2 Aug. 25 ’14:] The software manufacturer informed us that their software had a bug that misinterpreted the Sony A5100’s blacklevels (that seem to inherit green noise) and strongly affected the results for the Sony A5100 dynamic range test. We apologise for any inconvenience this might have caused. At cinema5D we will no longer rely on software results should they ever again differ from subjective evaluation. The software we use has been updated and the bug has been resolved. 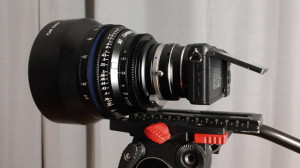 We will go into more detail concerning overall handling and usage in the field in our upcoming video review. But one should point out at this point that the camera feels very much like a consumer camera (which it is). In that sense you will not find the log-curve picture profiles like on the A7s or other prosumer models. Instead the A5100 offers “creative styles” where as mentioned Portrait performed best. We also tested “Picture Effects” like “Soft High-key” which may seem to improve dynamic range, but in our tests we found it doesn’t.

On all our tests we use the same ultrasharp Zeiss 50mm T/2.1 Macro lens and the DSC Labs XYLA 21 step dynamic range chart. If you want to know how we test, we explain that in this article: Sony A7S dynamic range test.

On the rolling shutter chart we can see how the Sony 5100 is also a winner. The Sony A7s while providing amazing images has a really bad rolling shutter performance, meaning the images tend to wobble on fast motion. The Sony A5100 however reads out the image even faster than the very well performing Panasonic GH4. 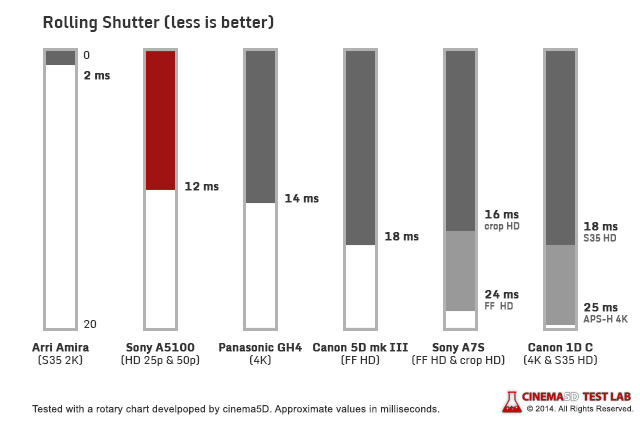 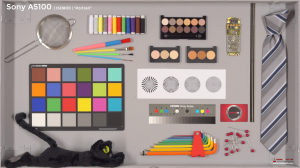 We just talked about how the sensor reads out the picture similarly in slow motion as in normal mode.
This can also be observed when we take a subjective look at the image which looks identical in both modes as opposed to how the Sony A7s behaves. (Meaning 5100 is better in this regard) 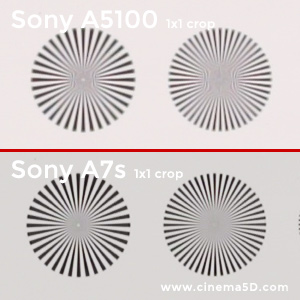 On the left you can find full frame grabs from the Sony A5100 and the Sony A7s for comparison.
Each frame is an i-Frame extracted from the original files. They were recorded under identical lighting conditions. The A7s was set to ISO 3200 (F/11) which produced a very dark image, as opposed to the A5100 shot at ISO 800 (F5.6). In both cases measured with a light meter.

On the left we’re displaying some 1×1 crops of the original images in which the Sony A7s image was brightened up with a curve where highlights were retained. 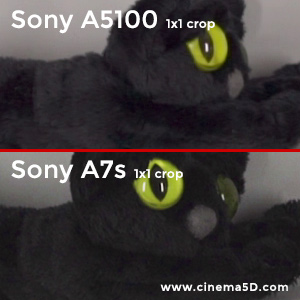 You can see that in terms of sharpness and detail the Sony A7s outperforms the A5100.

In the image with the sector stars (kindly provided by Danes Picta) it becomes apparent that there is some aliasing going on in the A5100 and that it can’t hold up to the crispy clean image of the A7s.

Here’s another crop of the dark cat that shows us the soft rendering of shadow areas on the A7s where I must say the A5100 actually doesn’t perform so bad. We’ve seen much worse and this is most probably due to the good dynamic range and noise performance on all of Sony’s latest cameras including the A5100. The overall pink tint of the A5100 is a weird shift in the Portrait Creative Style, but the color you can see in the dark fur, that seems to be moiré.

Where moiré can more clearly be seen on the A5100 is in the tie. It must be noted that most other DSLR kind of cameras have had worse moiré and aliasing performance. The 5100 will look good next to a T3i or most Nikon cameras for example. 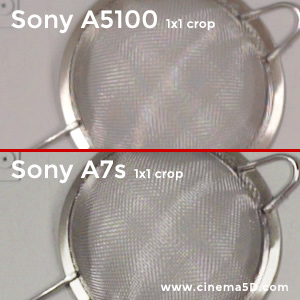 Highlight rendering on the A5100 is good. But the A7s really shines with its Slog2 profile that has a beautiful, organic highlight rolloff.

You can clearly see how nicely the Sony A7s renders all the highlight details while they seem less organic and slightly overblown on the A5100.

You might think the Sony A5100 was exposed much brighter, but then again, they were exposed with the same exposure values and the Sony A7s’ Slog2 simply has a different way of storing the data inside the luma range which isn’t an option on the consumer A5100 (yet).

The Sony A5100 clearly comes in behind the Sony A7s in terms of image quality, with a softer, less clean image. However for $550 (what do you expect) it is still a good performer among DSLR cameras that currently shoot video on an APS-C sized sensor. On top the slow motion mode gives you the same image quality as normal shooting mode.

In terms of dynamic range the Sony A5100 surprises with the measured results and beats most other important cameras we tested, even more expensive ones. [UPDATE:] As mentioned above the subjective impression we have about dynamic range on the A5100 is lower than the software results and can’t compete with the Sony A7s.

It also shines in rolling shutter performance. Overall it seems Sony has built its latest processing technology into this little mirrorless camera, providing good lowlight noise levels as well, which however we see nowhere close the A7s (not tested scientifically yet).

Add to that the internal XAVC S codec as well as the uncompressed 8-bit 4:2:2 output via hdmi in up to 60p and you’ve got a very interesting entry-level large sensor video camera in a tiny form factor.

We will take the Sony A5100 into the field and see how it performs in terms of usability. Watch out for our upcoming video review.