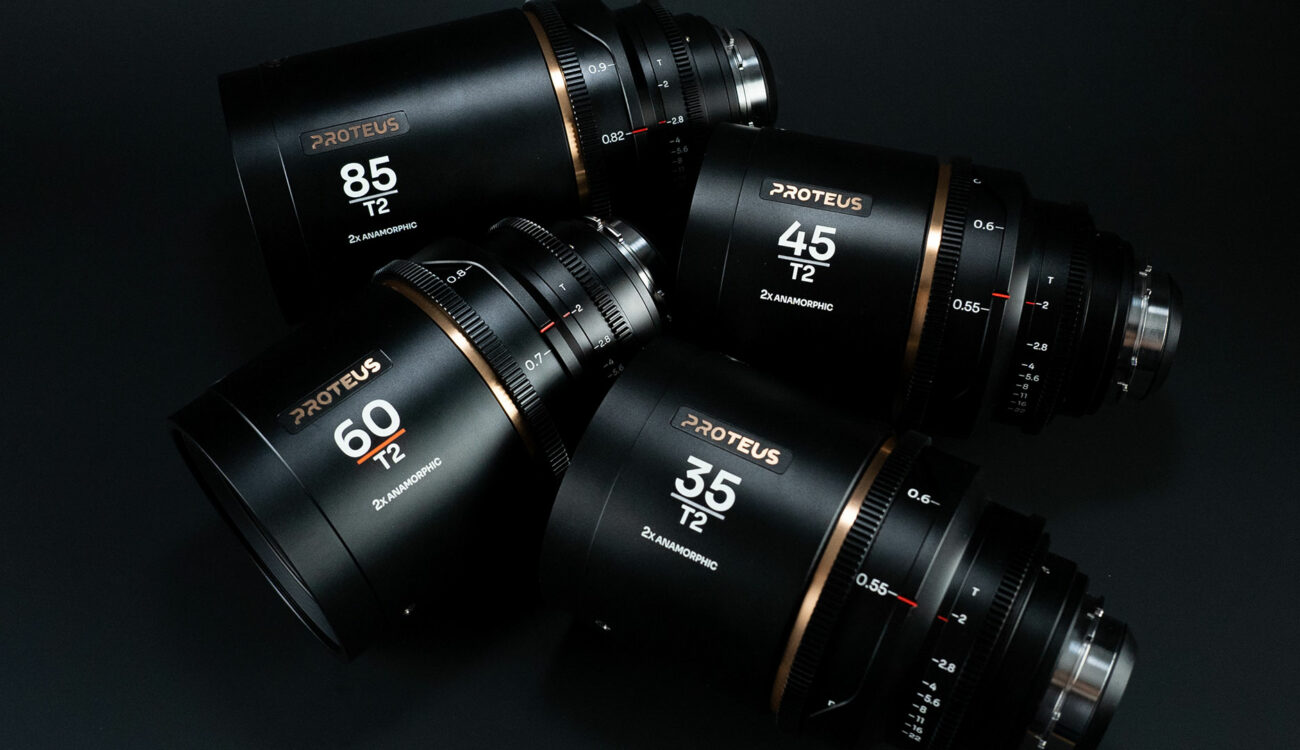 Laowa has released its entire Proteus 2X anamorphic lens set with four lenses: 35mm, 45mm, 60mm, and 85mm, all at T2. These lenses will be available with either a Canon EF or ARRI PL user-interchangeable lens mount. Also, you can choose if you want your lens flares to be blue, amber, or silver looking, which is quite interesting. So let’s take a closer look at all these new 2X anamorphic lenses!

Chinese lens manufacturer Laowa is well-known for its manual photo lenses, especially its 24mm probe lens and its entire Zero-D lineup of wide-angle lenses with no distortion. Last year, the company debuted in the anamorphic world with the Nanomorph 1.5X lens set, which are incredibly compact lenses and still the lightest glass of its kind set on the market.

A couple of months ago, during Inter BEE 2022 in Japan, we had the chance to take a first quick look at the Laowa Proteus 2X 45mm T2 lens. Laowa told us that other lenses would join the set quickly, and the least we can say is that the team holds its promises with the introduction of the entire lens set today.

The Laowa Proteus 2X anamorphic lens set consists of four lenses with a constant 2X squeeze ratio: a 35mm, a 45mm, a 60mm, and an 85mm. All lenses have an image circle of 25.92 x 21.6mm and cover Super35 image sensors. If you use the optional Laowa 1.4X full-frame expander, the lenses can cover full-frame sensors, but you’ll lose one stop of light.

All the Laowa Proteus 2x anamorphic lenses have industry-standard 0.8mod focus and iris gears. The focus throw is very long at 300°, and the focus ring has either imperial or metric markings depending on your choice.

However, even if some lenses have different lengths, all of the aperture/gear rings are unified in the set, which makes swapping lenses a breeze.

At the back of each Laowa Proteus 2x anamorphic lens, you’ll find a user-interchangeable PL or Canon EF lens mount. Please note that the optional 1.4X full-frame expander is only compatible with the PL mount.

Similar to the Nanomorphs, you can choose the lens flare color of the Laowa Proteus 2X between amber, blue, and silver. The blue coating is the most “classic” anamorphic look, while the amber one will give you a warmer image. Lastly, the silver lens flare will change color according to the light source.

The video above shows that the elliptical bokeh in the out-of-focus areas is much longer and thinner compared to 1.5X and 1.8X anamorphic lenses.

The aperture diaphragm is similar between all lenses and consists of ten aperture blades.

It’s also worth mentioning that, according to Laowa, the “Laowa Proteus 2X Anamorphic Series adapted a front anamorphic design for a robust optical composition.” In other words, you should not get any squeeze ratio changes at any focus distance.

What do you think about these new Laowa 2X anamorphic lenses? Do you believe a 2X squeeze ratio is too wide for your needs? How do you like the look of them? Don’t hesitate to let us know in the comments down below!