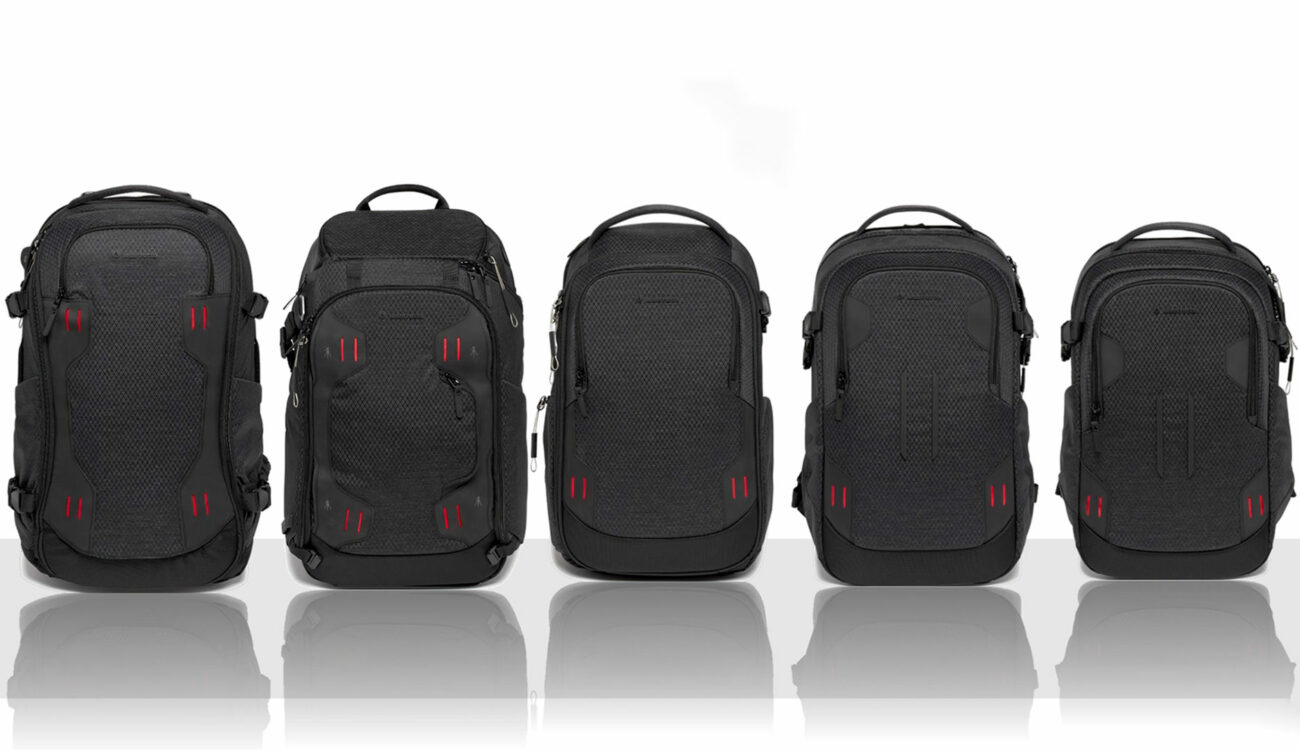 Leave it up to the Italians to design and make great things. Cars? Check. Food? Check. Tripods? Definitely. Manfrotto has been around since 1960 making camera support equipment. Since then they’ve branched out into bags, gimbals, memory cards, and batteries. But today we get another glimpse into the robust product line as Manfrotto unveils their redesigned Manfrotto PRO Light camera bags. Let’s pack some bags!

Manfrotto has been a world leader when it comes to camera gear. No matter if you’re a photographer, videographer, or just in need of a bag that has more compartments than a Marie Kondo closet. Today, they’re making their competition sweat with the Pro Light Collection.

These 5 new bags, and 2 new hard cases, were specifically designed for demanding conditions that photographers and filmmakers often find themselves in. Each one is specially designed for different applications and specific workflows. The Pro Light collection also introduces a new protection system, built from high-performance modular dividers made from high-density EVA foam. Allowing for not only custom internal compartments but a high level of protection and shock resistance, all in a slim profile. But enough gushing, let’s see what the Italian’s cooked up.

First on the table is the Pro Light Backloader, which comes in two models. The Backloader S and Backloader M. Both are the smallest of the bag line and come with multiple access points. A rear access point and a top access point. Both allow full access into the padded interior for your most-used cameras or lenses. The front contains a multi-section compartment for accessories and small items, such as drives, filters, and snacks. This section also contains an airport-friendly, or checkpoint-friendly laptop section for sizes up to 15 inches.

Both bags feature a double-sided connection for travel-sized tripods, an adjustable chest strap, and a rain cover. Both of these are perfect for photographers on the go. Be it for landscape photography, on-location photojournalism, or for hobbyists looking to lug around all of their gear. Unfortunately, the compact size doesn’t lend itself to video gear. I’m sure you can fit a BlackMagic camera inside, but leave your REDs at home.

Next, we have the Backloader M’s cousin. Being the same size, you could mistake the Pro Light Frontloader for the same bag. But the subtle differences make it useful for different circumstances. With a front access door, and a second single side door, the Frontloader does away with the Backloader features for a different layout. Being able to fit a full-frame workhorse with an attached 70-200mm f/2.8 in the side door pocket. It also features a tripod attachment point on the side, the same airport/checkpoint-friendly laptop section, adjustable straps, and rain cover. It’s almost the same bag, but with more features.

While the first three bags are tucked under the “Professional” category in the Pro Light Collection, the Pro Light MultiLoader and Flexloader are a league of their own. Manfrotto puts these two bags under the “Master” category.

The Pro Light MultiLoader takes both of the previous bags and combines them into one. But this isn’t Frankenstein’s monster. Think of the MultiLoader as the wonder twins. With their powers combined, you get a robust backpack that offers 4 points of access, and 2 side doors. The latter allows for quick access to equipment for quick gear swaps. Inside, the modular bag has three different configurations and can be carried either as a backpack, as a sling bag for quick lens swaps, or as a duffle bag for full access.

The MultiLoader also has a side attachment for a full-sized tripod and a front attachment that can carry monopods or lightweight stands. You’ll find the same laptop compartment as well as an adjustable torso height, double chest straps, and a padded waistband. With how much geat this thing can hold, you won’t need to go to the gym.

While the MultiLoader is a heft bag, the Pro Light Flexloader is another monster altogether. Being the largest of the collection, there’s a reason they named it the FlexLoader. Since you’ll be flexing every muscle in your body, just to carry all the gear it can hold. It can expand and cater to whatever needs you may have. Whatever DSLR, mirrorless, or video gear you have, you can fit it into this bag. Within reason, of course. I’m looking at you, NFL videographers with your giant lenses.

The FlexLoader has multiple attachment points for your tripods and sliders. The rear pocket is an expandable compartment that can be used for small form factor 3-axis stabilizers and gimbals, as well as their accessories. This compartment is completely separated from the main camera section and provides extra space without compromising the safety of your gear. If you’re a one-man band with the strength of Hercules, this bag is for you.

With 5 bags already on the table, what more could you want? How about some hard cases with rolling wheels? Did I just hear a pelican squawk in fear? Maybe, just maybe. The Pro Light Tough comes in two flavors, the TH55, and the TH83, with the former offering several different internal configurations.

These two cases offer the highest level of protection for your gear, no matter how delicate. The TL55 and TH55 are made specifically to meet airline carry-on luggage restrictions. All of these cases offer an airtight compartment with pull release latches and a telescopic handle. Modular accessories specifically made for these cases really make this gear stand out from the rest, while the protective interior and IP67 resistance keep your gear safe from dust, moisture, and impact.

A bag for each and everyone’s needs

Whatever your needs are, Manfrotto’s new offerings have you covered. It won’t matter if you shoot birds while you go hiking, or pack an entire rental house as you jet-set around the world shooting photos and videos. While Manfrotto was acquired by UK-based The Vitec Group, it hasn’t stopped them from creating amazing products. With such a pedigree, it’s hard not to trust these bags with your gear, especially at such attractive price points.

What do you think of these new offerings from Manfrotto? Will you be using these new bags to haul around your gear? Let us know in the comments!