In the 3rd episode of ON THE COUCH, we hosted our show sponsor ZEISS to talk about their company and news in the lens area. Our guests were Michael Schielen, Sales Director at the Camera Lens Division of ZEISS, Dr. Aurelian Dodoc, ZEISS’s Principal Scientist for lens development, and Barry Anderson, an American filmmaker and author of the well-know DSLR Filmmakers Handbook. 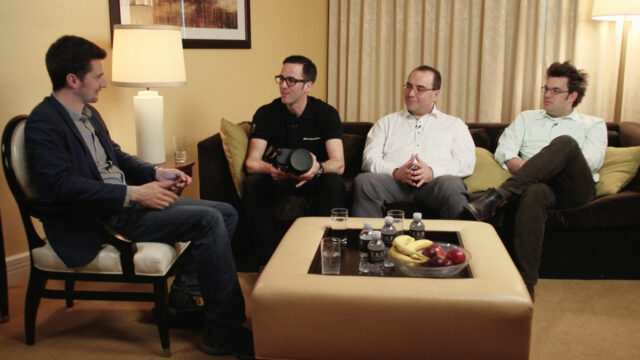 We talked about where ZEISS came from and how they got back into the game of cinema lenses in the late nineties. Then we touch on their popular CP.2 range and the new Compact Zooms, and the fact that their new lenses cover full frame – and what advantages this has even for Super35mm cameras. We cover the question whether or not there is a distinct “ZEISS look” and why it is essential to have a neutral image out of your camera to work with in post. The relevance of 4K was a topic as well, and how ZEISS makes sure their lenses are 4K capable – how they are measured. I asked Barry about the relevance of 4K in his filmmaking work and whether he thinks it’s just another fad like 3D or not – we seem to agree on the issue that it’s here to stay.

Aurelian Dodoc talked about ZEISS’s new anamorphic line and we shed some light onto what anamorphic actually means – there seem to be many misconceptions around that topic, especially since JJ Abrams established horizontal flares as a “look” in his Star Trek films. The last topic we covered was ZEISS’s concept of a zoom rocker that can be added to all three new Compact Zooms – including control options of not only zoom, but also f-stop and focus.