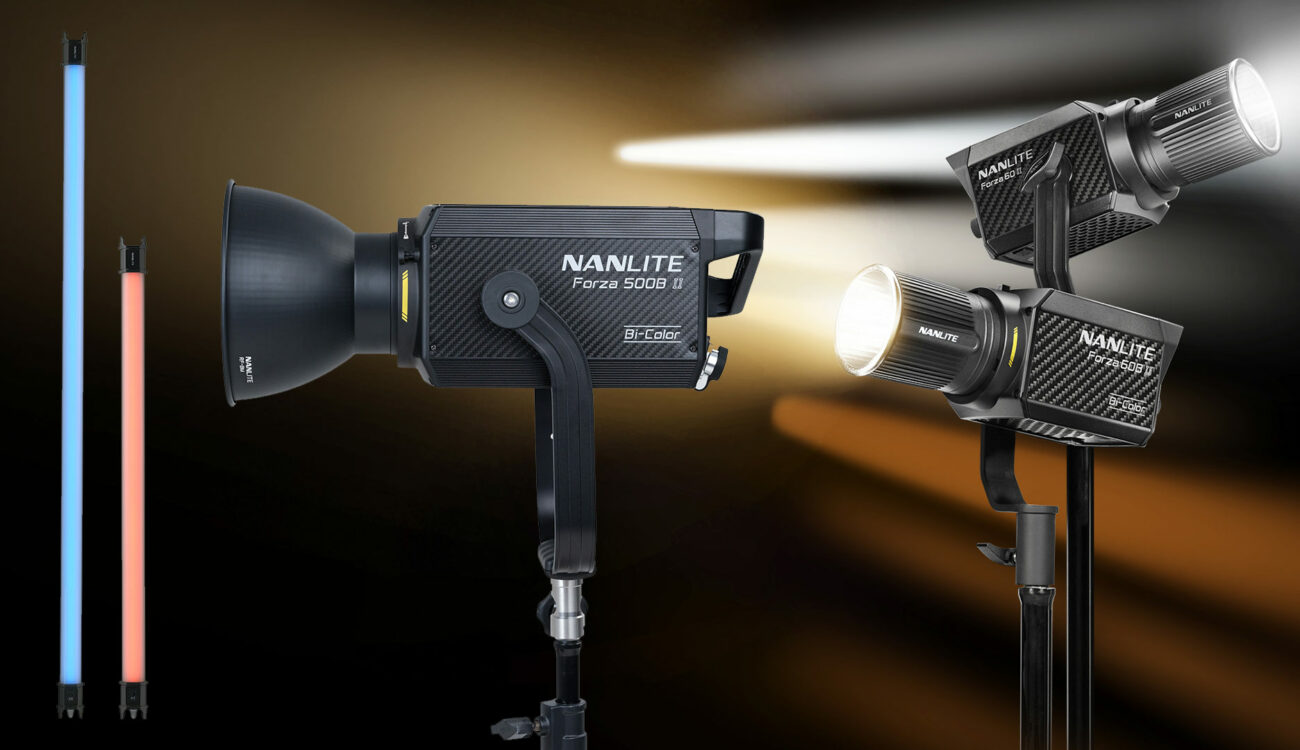 NANLITE Forza II lights (60, 60B, 300, 300B, 500, and 500B) bring improvements in terms of interaction, control, and noise management, and they offer high color accuracy. The new PavoTube II C full-color tube lights are 10% and 20% brighter respectively than the previous generation and they feature an extended illumination area with shortened caps on both ends.

The Chinese lighting manufacturer NANLITE just launched a lot of new LED fixtures. There are six new Forza II series COB lights that include both daylight and bi-color versions in three different strengths:

According to NANLITE, all the new Forza II COB lights feature improvements when it comes to interaction, control, noise management, and more. All three new bi-color versions of the fixtures offer a variable CCT range of 2700K to 6500K and two output modes – maximum output mode and constant output mode.

NANLITE claims that all the new lights are quite color-accurate with the CRI and TLCI values rated at 96 and 98 (or 97) respectively. The Forza II series lights include 11 (daylight versions) or 12 (bi-color versions) built-in effects with adjustable parameters. The lights can get firmware upgrades via the USB-A port on the lamp head body.

The most compact and lightweight of the new lights Forza 60 II and 60B II can achieve up to 3,420lux (daylight only) or 2,[email protected] (bi-color) without any modifiers. The lights have a 60W rated power draw and come with an FM mount. Bowens mount is available via an included adapter.

Multiple control methods exist, including 2.4G, Bluetooth, DMX/RDM, or classic onboard UI of OLED display and tuning knobs with a MODE button added. The included active fan can be controlled with a noise level down to 20dbA even with the fan rotating. The lights offer both AC and DC power solutions with a battery grip for two NPF batteries or a V-mount battery.

The larger Forza 300, 300B, 500 and 500B II series lights are COB fixtures equipped with a Bowens mount and an extra umbrella mount and they come with glass protection for the COB chip to eliminate external intrusion. The good news is that these lights also feature a built-in W(RG)/WW(RG) color mixing system with G/M±80 (green/magenta) tunability.

NANLITE also reduced the overall control unit size (with a power adapter incorporated inside) of Forza 300/300B II by 37% and Forza 500/500B II by 16%. Other form factor innovations include V-Mount battery plates on both sides of the control unit, a curved yoke with a one-sided locking mechanism and an integrated quick-release device.

On top of using the interface on the control unit, the fixtures can be controlled via 2.4G, DMX/RDM, and the NANLINK app. Both dual and single battery power solutions enable hot plugging as well as hot swapping between AC/DC. The adjustable active cooling system has four operation modes available – smart, full speed, low speed, and off.

NANLITE claims the new PavoTube II lights are 10% and 20% brighter respectively than the previous generation and they also feature a wider CCT Range of 2700K-7500K. They also include the green-magenta G/M±150 adjustment functionality. There are two knobs and one button for intuitive onboard operation or 2.4G, Bluetooth, NANLINK app or DMX/RDM for remote operation.

The USB-C port on the new PavoTube II C lights offers PD3.0 (power delivery) charging, power supply, and firmware update functionality. The lights also have 15 built-in practical effects. Physically, the tubes offer an extended illumination area with shortened caps on both ends and the LED chips are obscured with innovative diffusion materials to provide even illumination.

All the newly announced lights can be pre-ordered and the MSRP has been set as follows:

Do you use NANLITE fixtures for your work? What do you think about the new generation Forza and PavoTube lights? Let us know in the comments section underneath the article.