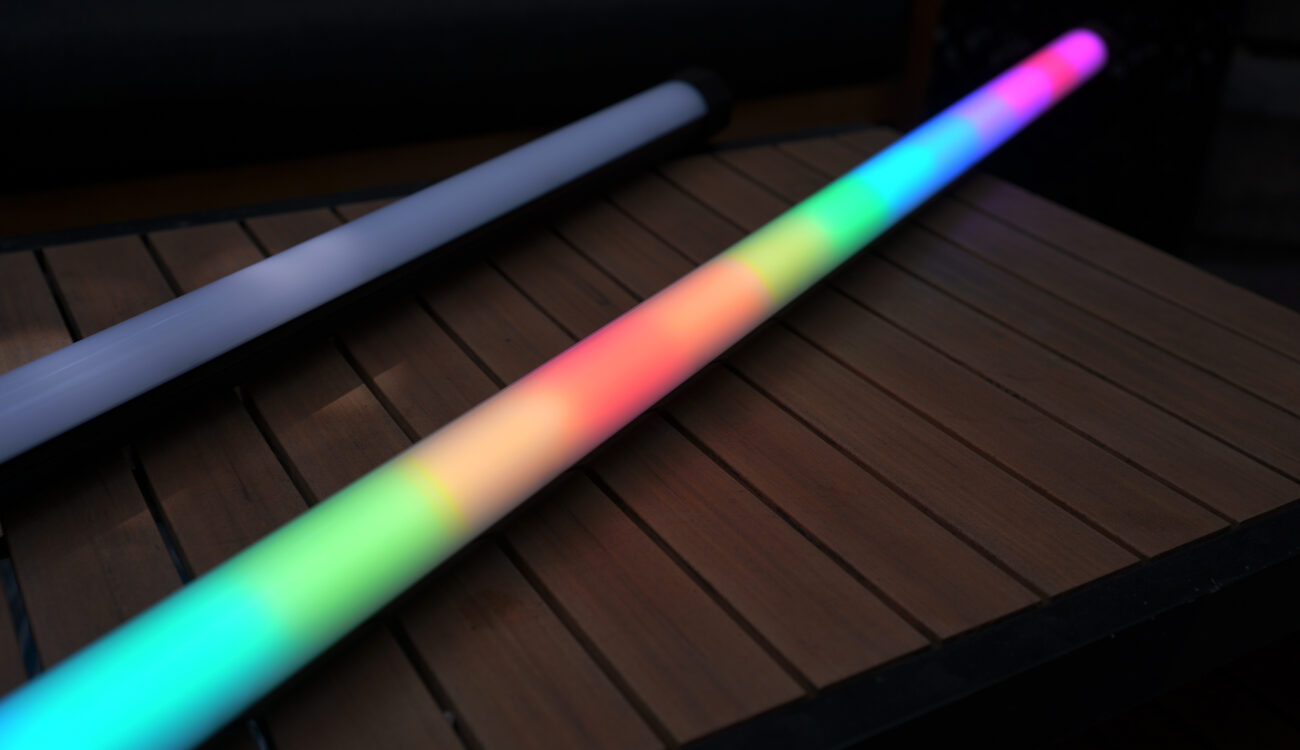 Lighting manufacturer NANLITE has updated their popular PavoTube LED tube lineup with a new second RGBWW generation in three sizes ranging from 2ft to 8ft. We were lucky enough to get our hands on the new PavoTube 15X and 30X for a field review. How does the PavoTube II series hold up against the first generation and other popular LED tubes on the market? Let’s find out!

The first-generation PavoTube series checked a bunch of boxes for me. The series is cheaper than the industry-leading Astera tubes while also offering internal batteries, a variety of available accessories, wireless Wifi app control with additional accessory purchase, and a whole host of features we’ve come to expect from our lights these days like bi-color, different effects, and lots and lots of color options.

When I say affordable, I mean it. The 4ft version of the original PavoTube, the 30C, came in at $329 versus $849 for the 4ft Astera Titan. The Quasar Science Q50 with no internal battery power landed at $750.

To be frank, the accessories for the original PavoTube didn’t really grab me, and the lack of Bluetooth control was disappointing. Still, considering the price, much could be overlooked. The original was not a home run but definitely welcome competition in a time when the options for LED Tube color-capable tube lights were limited.

So why does the tube form factor appeal to filmmakers? I’ll venture the ability to zip tie, use magnetic mounts, or even a bit of gaff tape (safety first, of course) for mounting have made it an incredibly flexible lighting option. Music video producers love the tube light, and there for a while, you saw video after video with Astera titans populating the background. 2ft tube lights also travel well if you are mindful of the lithium-ion battery requirements for global air travel.

Historically, the NANLITE brand, which includes NANLUX and Ledgo (each sold by umbrella company Nanguang), has felt to me a little undefined. Even though I’ve been told the brands are separated for professional and more prosumer customers, the NANLUX Evoke 1200 seems as professional a product as the Dyno or PavoTube II series. No matter – they have been making impressive inroads into the professional market, with the Forza 500 being the biggest surprise.

Comparing apples to apples, the 4ft PavoTube has received a single unit price increase from $329 to $579 — not insignificant, but still landing in a more affordable place versus Quasar Science and Astera. Pricing aside, the PavoTube II series has gained a few big banner features that to you may justify the cost increase. Those features include Bluetooth app control (no pricey accessory purchase needed), individually controllable zones, and a vastly wider selectable kelvin range of 2700K to 12000K (with HSI control and Green/Magenta adjustment).

At first glance, the PavoTube II series doesn’t look dramatically different from the first generation. The external differences are minor and mainly involve button placement: the power button has moved, and the control knobs on the ends are gone. The knobs have been replaced by buttons directly adjacent to the menu screen. There are also three new 1/4″-20 threads for mounting the PavoTube II in various configurations. Because the button placement is clustered around the menu screen, usage feels more intuitive when compared with the first generation.

The 1/4″-20 thread on the end makes sense for the promised upcoming small “floor stand” accessory that would allow the tube to stand vertically on the floor, but for safety reasons, I wouldn’t mount a 2ft or 4ft PavoTube II from a single 1/4″-20 mounting point from any great height. I would feel more comfortable using the two rear-facing threads at the same time alongside a safety tie for mounting above any talent.

Although I mentioned earlier that mounting LED tubes is usually straightforward, it doesn’t mean it’s intuitive with every LED tube on the market. The standard T12 size of the PavoTube II’s does mean a wide variety of 3rd party accessories available to you from brands like DoPChoice and Matthews. I’m glad we’ve settled on T12 as a standard in the LED tube space. That’s going to save filmmakers on accessory costs overall.

I’m also impressed by the weight of both the PavoTube 15X and 30X — these are lights that you can move around set quickly without breaking your back.

I grabbed a few measurements on my Sekonic C-700U Spectrometer (now updated with the C-800U) to see how accurately both the 2ft 15X and 4ft 30X handle color temp measured in kelvin and output (lx) from a distance of 3 ft. Here are my readings with a target of 3200K and output set to 100%. I had no accessories attached for any of these readings.

A reading of 3131K with a target of 3200K is well within an acceptable margin of error and a great result. For comparison, here is a measurement from the PavoTube 15X with a target of 5600K – with output set to 100%.

My reading of 5471K with a target of 5600K might drift just slightly from the Tungsten performance, but this is another excellent result for the fixture when it comes to accurate kelvin handling.

Hitting 3129K with a target of 3200K is a very consistent result compared with the 2ft and one that is also excellent. I want to take a moment to flag the lux measurement. At 696 lux, we’re right alongside Astera Titan output and the Astera Titan usually lands around 700-ish lx for me measured at the same distance with a similar kelvin temp.

And, finally, let’s check daylight kelvin handling with a target of 5600K:

I’m always nervous trying a lighting manufacturer app for the first time because, frankly, in the past, I’ve been burned by ill-thought-out applications. This time, things are different. The NANLINK app is a welcome addition. It serves to justify the overall cost increase of the PavoTube second generation. Click HERE for iOS (Android coming soon).

Connecting over Bluetooth is easy, and on my iPhone, the lights were immediately discoverable. Know that the previously released PavoTube II 6C can also eventually be firmware updated (coming in January 2022) for use with the NANLINK app, and here is where things get tricky. My review lights needed to be firmware updated to test the app, and as the number of compatible thumb drives for the firmware transfer is currently limited, a USB-C adapter was also needed. Do as I did: follow the firmware update instructions available online carefully and don’t cut corners.

I was worried that things would be tricky in app form with the potential complexity of additional pixel controls and over a dozen different effects, but the opposite is true. The app is my preferred way of controlling any of these tubes, and the app setup of a given effect takes half the time compared to navigating the menu manually.

In fact, the app feels less DMX board op going Bluetooth and more like it was designed for filmmakers moving from simplistic fixtures up into the programmable effects world. My point is that you’ll find the app intuitive, and you will be able to get the light to do what you want it to do. Great.

For those interested in DMX control, you’ll need a NANLINK transmitter box available HERE to control multiple fixtures wirelessly. The NANLINK transmitter has a built-in battery (with a promised 10-hour battery life) and is compatible with a whole host of NANLITE products ranging from the Forza 60 to the MixPanel series.

So far, this is one of the better outings for a lighting manufacturer app. If you’re concerned about the fixture firmware update (maybe future tubes ship with the update already installed), then you’ll enjoy the control the app affords you.

The PavoTube II series is a worthy update to the previous generation. It also feels like a leap ahead in terms of additional features for the entire PavoTube product line. A solid Bluetooth app mixed with multiple controllable pixels and additional mounting points along with a bump in output make the price increase justified, in my opinion.

I would like to see further improvements to the 1st party accessories and finding a compatible USB thumb drive for firmware updating is still a bit tricky, but there is much to like here. I give the PavoTube II series four controllable pixels out of five.

What do you think? Will you be adding the PavoTube II 15X or 30X to your kit? Let us know in the comments below!