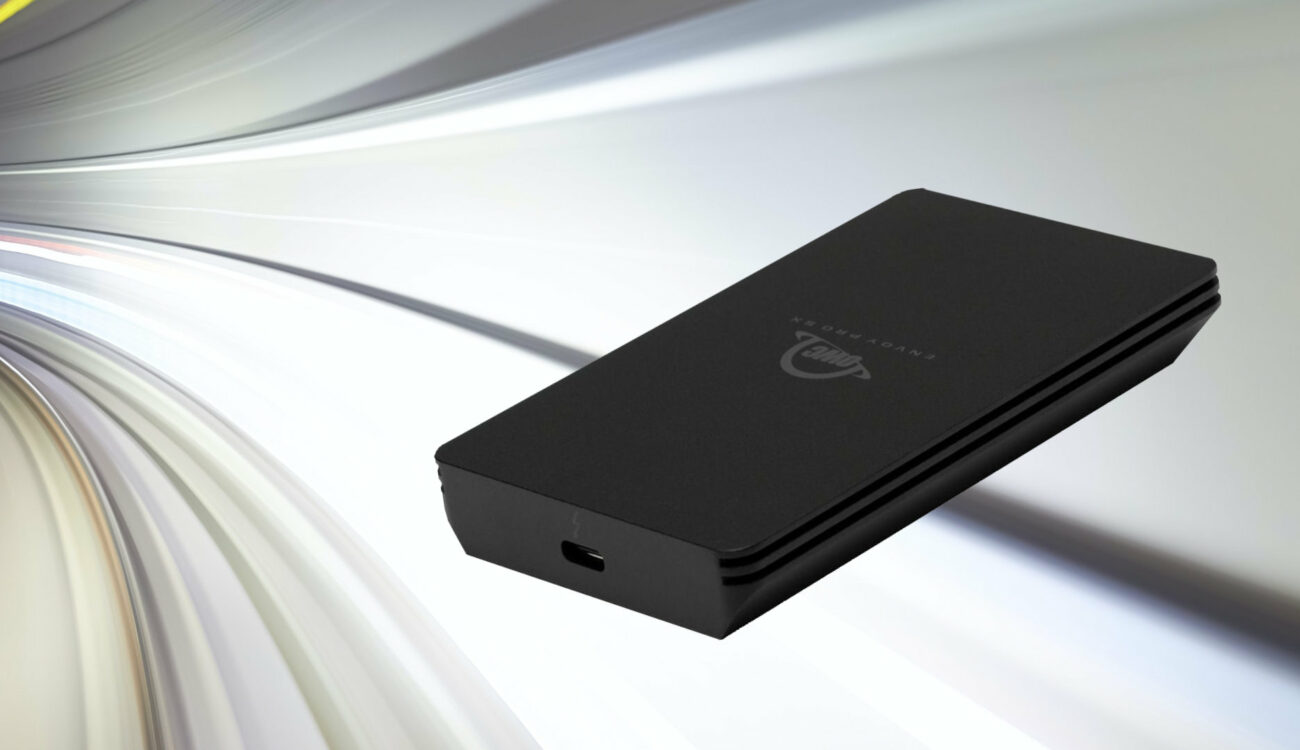 Need a ludicrously fast SSD for backup footage? Then the OWC Envoy Pro SX might be something for you, a rugged and small drive sporting Thunderbolt 3 and with up to 2TB worth of storage.

Storage specialist OWC just released the Envoy Pro SX – a small form factor SSD made for demanding situations. Dustproof, splashproof, drop-proof, and equipped with Thunderbolt 3 this drive is made to be used. For tough shoots in challenging environments, this could come in handy.

It is test certified to handle the nastiest environments, so you can work from anywhere without a second thought. From managing obstacle in the field to crushing deadlines at home, the Envoy Pro SX lets you unleash your productivity power

It’s drop-proof (tested from a height of four feet), dustproof, and waterproof (for 30 minutes at <1 meter). The USB-C cable is removable as well. So the Envoy Pro SX is built to last.

Regarding speeds, it’s fast. OWC claims 2847MB/s real-world read and write speeds. You should always take marketing numbers with a grain of salt, but their Envoy PRO FX was already independently tested to surpass the claimed 2800MB/s read speed (write speeds were closer to 2300MB/s). Just to put that in perspective, that would mean you could copy a 128GB camera drive in about 56 seconds (if your camera drive can keep up, that is).

Keep in mind this is a Thunderbolt 3 (or later) drive, so in order to achieve these numbers, you either need a device with Thunderbolt 3 or USB 4 (which includes the Thunderbolt 3 protocol) ports. This can be quite confusing since both Thunderbolt 3 (and 4) sport the exact same connector as USB 4 does: USB-C. Make sure to check your computers specs!

The rugged black housing is made from aluminum, so it acts as a heatsink. Therefore the drive doesn’t have a fan and is completely silent. Even though there are many SSDs without fans, drives operating at these speeds can heat up really quickly so fanless operation is not taken for granted.

The Envoy Pro SX is both Windows and macOS compatible. Thunderbolt 3 and USB 4 is much more common on Macs than on Windows PCs, but newer high-end windows computers should support this drive as well.

The Envoy Pro SX is available now in 240GB, 480GB, 1TB and 2TB variants and costs $199, $249, $349 and 529$, respectively. That is quite expensive, especially compared to a popular SSD like the Samsung T5 costing less than half of that. But the T5 also only allows for read & write speeds of about 500-550MB/s, about one-fifth of the capabilities of the Envoy Pro SX. So you do pay a premium on speed and durability, but depending on your workflow, this might be worth it.

What do you use to backup files on set? Let us know in the comments.