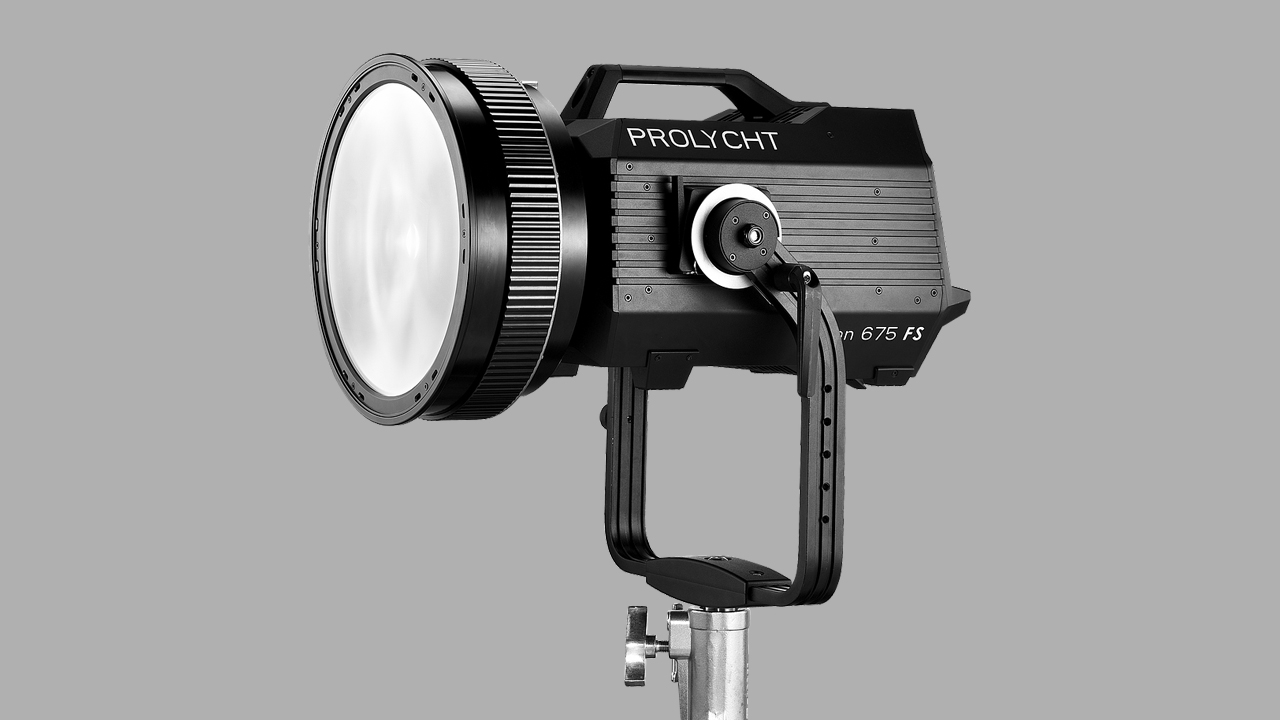 Prolycht has finally unveiled the full specifications and production design of their Orion 675 FS full-spectrum RGBACL high-power spotlight and accessories. The Bowens mount and yoke have been revisited, while Bluetooth Mesh and LumenRadio CRMX functions are now enabled.

First introduced back in April at NAB 2022, the Prolycht Orion 675 FS is an extremely bright COB LED spotlight that packs a lot of power into a body-only design. If you’d like to have an overview of this fixture, I recommend taking a look at our initial coverage and NAB interview before going on.

Apparently, the company has taken some time to make a few tweaks and is now ready to unveil the production version of the Orion 675 FS, along with the final design of the dedicated Fresnel lens at the upcoming IBC Show in Amsterdam. So let’s take a closer look at the improvements.

The Prolycht Orion 675 FS is a wide-gamut spotlight powered by the company’s 6-color (RGBACL = Red/Green/Blue/Amber/Cyan/Lime) LED Hyperlight Color Engine, which is claimed to deliver extremely accurate colors and skin tones. Although the company advertises this product as a direct rival of old-fashioned 1,200W HMIs and 2K tungsten fixtures, there wasn’t any official photometric measurement out in the wild immediately after its release.

The Orion 675 FS now features a revisited light body with a few enhancements. The major one is a redesigned Bowens mount, which comes with a patented ProLock breech-lock positive locking clamp mount. This should grant a sturdy attachment of Prolycht, dedolight, or even third-party Bowens-mount light modifiers without any unwanted jiggle.

Moreover, the light yoke has been redesigned to facilitate use with bulky, heavy accessories and optics. The yoke has a quick-release design, which is reversible for better weight distribution. Moreover, its surface features multiple 1/4”-20 threads that can come in handy for mounting accessories or for cable management. The same applies to the light body.

While the fixture comes with two reflectors out of the box (30° and 55°), the company had also announced a full set of Orion 675 FS accessories, including a Fresnel lens with 8-leaf barn doors, 60” Soft Dome, and 35” Soft Lantern. We now know that the 25cm/10” diameter Fresnel accessory offers a beam angle that is adjustable between 15 and 50°. Furthermore, users will soon be able to shape the light remotely via an upcoming motor module. Lastly, the company announced that new optical accessories, developed jointly with dedolight, are on their way.

The final version of the Prolycht Orion 675 FS and the dedicated Fresnel lens will be on display at IBC 2022 in Amsterdam. The show opens its doors on September 9th and you can visit Prolcyht’s booth (Hall 12, Booth H43) until September 12th. Of course, we will be on the show floor covering all major announcements.

The Prolycht Orion 675 FS is currently available to pre-order from B&H and CVP. The Standard Kit, which includes the lamp head, two reflectors, and 10-meter power cord, retails for $3,495. By adding $300, you also get a rolling hard case. According to the company, the first Orion 675 FS production units are currently being tested and should reach dealers and customers soon.

What do you think of the full specifications of the Prolycht Orion 675 FS? Are you going to visit their booth at IBC? Let us know your thoughts in the comment section below!