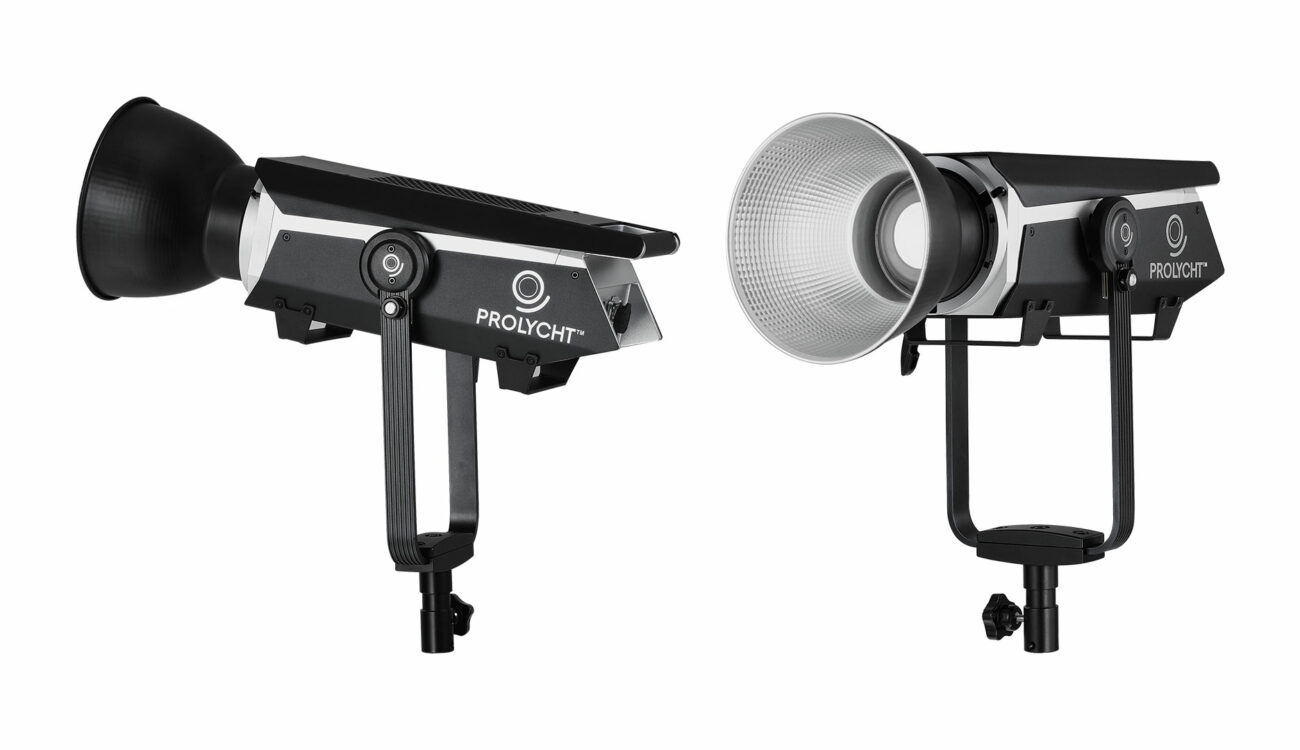 Prolycht, a relatively new player in the lighting industry, has just released a new RGBCAL LED light: the Prolycht Orion 300 FS. This fixture can go from 2.000K to 20.000K, you can select from hundreds of Lee/Rosco filter colors, and it has an impressive 31.090lux output at 1m/3.2ft with the standard reflector. Let’s take a closer look at this interesting LED light!

If you’ve never heard of Prolycht before, don’t worry, I haven’t either. Prolycht is a new Chinese lighting company founded by Anqing Liu, a lighting research scientist.

The Prolycht Orion 300 FS is not the company’s first product, as they already released the Thunderlite, Thunderlite One, and Orion 300 last year.

LED lights for the film industry are mainly divided into three categories: fixed-color light (3200K or 5600K), bi-color LED lights, which let you adjust the color temperature of the fixture, and RGB lights. RGB LED lights can be seen as the best of both worlds because they can reach any desired CCT color temperature and offer you a full range of color creative options.

Though it’s not as simple as it seems, because they are also divided into subcategories: RGB, RGBW, RGBWW, RGBAW, and now RGBCAL. Basically, RGBCAL LED fixtures feature six different types of LED chips: Red, Green, Blue, Amber, Cyan, and Lime. According to Prolycht, “by fine-tuning the intensity of each color channel, (an RGBCAL fixture) provides an infinite number of spectral shapes. And because those six colors are almost evenly distributed along with the spectrum range, an RGBACL source could independently fine-tune small ranges within the spectrum.”

The Prolycht Orion 300 FS follows a “traditional” design similar to the Aputure LS 300X/D, the Nanlite Forza 300, and many more. As you can tell, the light consists of a lamp head (3.7kg/8lbs) and a ballast (3.2kg/7lbs). So it’s not exactly a “lightweight” package, nor a ready out-of-the-box type of fixture, as you’ll need 5-10 minutes to get it up and running.

The lamp head is made from aluminum. It has a large tilt lock on the yoke, which looks very secure. At the front of the Orion 300 FS, there is a Bowens Mount so that you can attach various light modifiers to it. At the back of the lamp head, you’ll find a connector to plug the head to the ballast, and that’s it. Also, please note that the head has a built-in fan that you can set to Silent/Low/Medium/High/Auto speeds.

As I explained earlier, the Prolycht Orion 300 FS is an RGBCAL fixture that can reach color temperatures from 2.000K all the way up to 20.000K with Green/Magenta adjustment. In Color mode, you’ll get access to the full R/G/B/A/C/L gamut adjustments, with seamless color tuning in HSI mode.

The Orion 300 FS also features hundreds of built-in Rosco/Lee gels presets and 19 lighting effects. Below is a chart with the measured outputs, according to Prolycht.

It seems like a pretty powerful LED fixture; however, other competitors like the Aputure 300D Mark II do a better job at 1m/3.2ft with the included reflector at around 45.000Lux compared to 31.090Lux for the Orion 300 FS. Obviously, you can’t have the cake and eat it too. But, numbers only tell you part of the story.

The ballast/control box of the Prolycht Orion 300 FS is where all the magic happens. On the front/back of the unit, you’ll find the two V-Mount/Gold Mount battery plates.

There is a V-Mount wedge on the side of the ballast so you can attach the ballast to the included clamp and put it on your light stand.

On the other side, you’ll find all the connectors, including: 5-pin DMX in/out ports, AC power connector, lamp head connector, and a LAN port with built-in ArtNet.

On top of the ballast, you’ll find a color control panel with three adjustment knobs and four buttons. Of course, like every modern LED fixture, you can also control it via the company’s Chroma Link smartphone/tablet App, and Prolycht mentions that it supports “3rd party App control” but we don’t have any additional information.

The Prolycht Orion 300 FS is available now for $2.150/€1.995 in either V-Mount or Gold Mount version. The standard package includes the lamp head, ballast, power cords, the standard reflector, a security cable, and a carrying case.

What do you think about this new Prolycht Orion 300 FS LED light? Have you ever shot with an RGBCAL LED light? Don’t hesitate to let us know in the comments below!