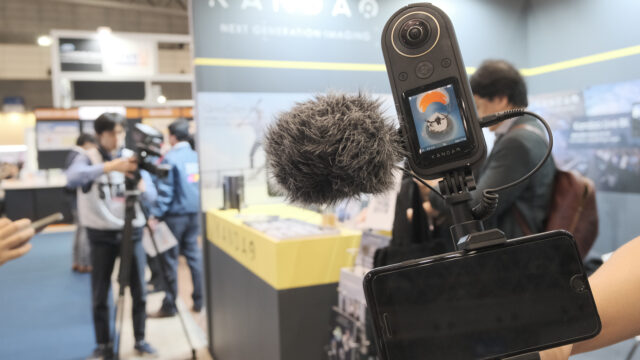 I’ve been using the original QooCam for about a year. I’m also using the Insta360 One X and have used the Insta360 One before that. However, there’s two things that have been holding me back. The first thing I’ve been waiting for is 8K in an affordable, accessible 360 camera. The second thing is 10-bit video encoding at high bit-rates (something that also really needs to come to smartphones very soon). The fact is, 8K is really a minimum to capture a full 360 with sufficient detail and clarity. QooCam has delivered this and more with the QooCam 8K.

These are some serious specs for a compact 360 camera that’s aimed at the consumer creator.

Kandao claims that the QooCam 8K achieves APS-C level image quality, a first in a 360 camera of this size. This is down to a new image processing pipeline and a pair of 1/1.7″ 20MP sensors, with 246% larger area than the sensors in the original QooCam.

The QooCam 8K allows action to be captured at 120fps in 4K for even smoother, immersive 360 experiences. A 6-axis gyro and IMU for electronic stabilization eliminates camera shake for cinematic smooth video. This may well make the camera a great choice as an action camera.

An internal 3000mAh battery should keep the camera running for plenty of time but making it removable could have been a good idea. Having the ability to swap out the battery for a charged one while on the run would be useful for a lot of people. Having said this, Kandao has incorporated 64GB of internal memory, with a microSD card slot for additional memory. This is a great feature because the camera is immediately usable right out of the box.

A 2.4″ OLED touch screen makes the QooCam 8K entirely operable without a smartphone. Clips can be reviewed on screen as well as menu functions and camera status information.

For the first time, professional specifications such as 8K 10-bit video at high bit rate has been incorporated into a consumer 360 camera. This may make the QooCam 8K more of a “Prosumer” 360 device. This is a camera that should be capable of high end results in the right hands, and at the same time be easy enough to use for anyone wanting to capture the world around them.

These are the details released so far. Take a look at the QooCam 8K webpage for more information. We will be reviewing the camera in full, so stay tuned for more on the QooCam 8K.

Have you used the original QooCam? What do you think about the QooCam 8K? Let us know in the comments