RED Komodo is getting close to its release. While we still don’t have final confirmed specs of the camera, we now know the price will be around $7.000 for Stormtrooper (white) edition and around $6.000 for the regular black version which comes after that. Before Stormtroopers, RED will ship limited custom-colored Komodos for $7.000 or slightly above that. According to Jarred Land, this will happen already on June 1st, 2020. 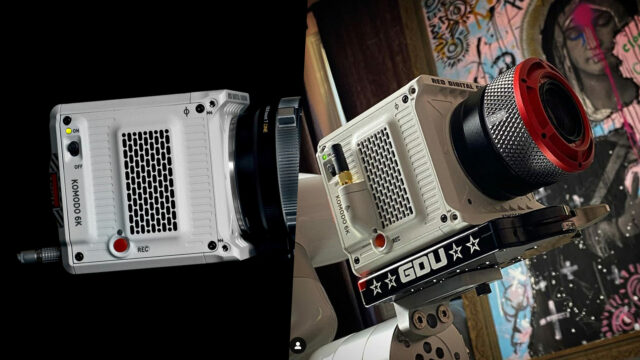 When hunting for new information about RED Komodo, in addition to REDuser.net, Jarred’s social media accounts seem to be the right place. Recently, Jarred Land, president of RED Digital Cinema, posted some useful information regarding RED Komodo on his Instagram account.

It has been a while since we last posted an update on RED’s latest compact cinema camera. Since then, there have been a few interesting updates, so let’s get into it.

In his post on Instagram, Jarred wrote that the production of RED Komodo is back on track after the interruption caused by the COVID-19 pandemic. Due to the new safety protocols, it is, however, going much slower. Jarred further wrote that in two weeks, RED will start selling the first batch of cameras in “super limited low quantities”. The post was written on May 17, so I suppose this will start on June 1, 2020 (as May 31 is a Sunday).

New step in the the process? 15 minutes in the magical UV Bubble just for good measure. Now that our factory is back in action …albeit severely anemic with the new protocols, we can slowly start making Komodos again. it’s a really, really slow train now so it’s gonna take a while to get enough of our troops back to start making enough volume to blast out to dealers and the world but the good news is to pass that time and keep our skeleton crew busy, in 2 weeks I’m gonna start selling some crazy colored Komodos to my friends and anyone else who wants to be a little “different” . Super limited low quantities. Will make just a handful per week till the stormtroopers are ready . Email me if your interested.

Now, these cameras will be pre-release versions with custom colored housing. Jarred said, that hardware is finalized, but in terms of firmware, there might still be some bugs that will get ironed out with later updates. Some of you might already know that RED usually starts selling a new camera in a white version – called Stormtrooper. These cameras are coming even before Stormtroopers.

Jarred said anyone interested in getting one of these early colored pieces, should write him an e-mail. It is not clear at this point, whether the early adopters get to choose the color of the housing or if RED just ships a random color.

Ice Cream boot-up on Lana’s custom Komodo as Chad gets it prepped for the next phase of shooting.

The colorful Komodos are not new. We have already seen the green BAYHEM Komodo for Michael Bay and the custom orange/red version for Lana Wachowski.

When it comes to the price of the pre-stormtrooper colored version, Jarred said: “Everything got way more expensive cause of this whole virus thing but I’m gonna hold these custom colors to the stormtrooper price for as long as I can.” This means the first custom-colored Komodos could cost slightly over the $7.000 mark.

Jarred confirmed multiple times that the special discount for Hydrogen owners still applies to the regular black RED Komodos that will come after the Stormtroopers. It has not been yet disclosed how much the discount will be. Early on, Jarred said that for Hydrogen owners, the Komodo should cost under $5.000. He also confirmed this few times in the process. It remains to be seen if this gets unaffected by the current circumstances.

So again, the only way how to currently pre-order the RED Komodo is to contact Jarred Land directly at [email protected].

The following Komodo-related news were announced a bit earlier already, but I decided to include them in order to have a complete cinema5D coverage of the process since my last update on Komodo. Roughly a month ago Jarred Land shot Brad Pitt for the opening video of Saturday Night Live show with the RED Komodo.

Jarred said he shot this with the Komodo with the SIGMA cinema 50-100mm zoom lens.

A bit over a month ago, Jarred posted a short demonstration of the Komodo’s Phase Detect Autofocus (PDAF) on his Instagram. It is quite interesting as it also shows the touch interface of the Komodo.

Another weekend in lockdown and another awesome new weekend Komodo firmware build. PDAF autofocus is coming along nicely… we still have miles and miles to go to make this new AF perfect but the RED engineers definitely are at the top of their game right now. #komodo

The main thing that still remains undisclosed about the RED Komodo are the official specs. We get a pretty good picture of the camera’s capabilities from what Jarred said over the months. For those who are pre-ordering the camera right now, an official list of specs would be nice though. Here is a roundup of known specs (from my previous article):

What do you think of the RED Komodo so far? Will you be pre-ordering the camera? Do you own the RED Hydrogen to qualify for the discount? Let us know in the comments below the article.