Last month we reported about the new Anamorphot 65, an anamorphic lens adapter by SLR Magic that can mount to lenses with 82mm front thread like SLR Magic’s own micro cinema primes and FUJINON’s MK family of lenses. There is also a chance that by the time you read this review, this promising adapter will be available for preorder. 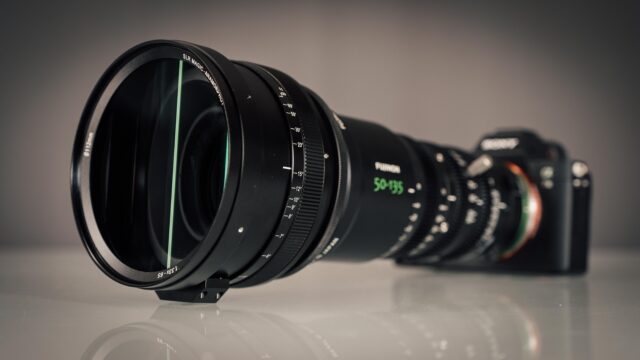 Nino, my colleague, caught up with Andrew from SLR Magic during this year’s CineGear to discuss the new product, yet it was time to actually test it and put it through its paces.

First thing first: Why should one actually consider “shooting anamorphic”?, well, the answer is clear. If you are looking to mimic the true aesthetic of cinematic looks, then shooting with an anamorphic lens is the way to go. As this is a product review I will not go deep into the subject anamorphic filming, but please consider heading to our cinema5D essentials episode where Li-Lian and I were aiming to explain what anamorphic filming is all about….

Ok, so if shooting with anamorphic lenses has the benefit of producing a unique look, why is it not too widely spread? In short: budget and training. TRUE high quality anamorphic lenses simply coast A LOT, far beyond the budget of most independent filmmakers. There are, of course, ways to track and purchase vintage anamorphic lenses, but this is not too easy. Speaking of anamorphic – I urge you to visit our friend and content contributor, Tito Fernandez’ YouTube channel, where he demonstrates a great deal of knowledge and shares valuable tips for anamorphic lens and adapter lovers.

The question remains: If true anamorphic lenses are expensive, what is the next best option? The answer is, “adapters”. The idea of putting an anamorphic lens adapter in front of spherical lenses is nothing new and can actually make a lot of sense, as most of us already own many of those wide spread zooms or primes, so why not make use of those and attach an adapter to them? (I’ll leave this question open, hoping to hear answers from you guys in the comment section below). In the past, I’ve already tested SLR Magic’s entry level anamorphic adapter, the Anamorphot 40 compact adapter, but besides the fun I had exploring shooting in anamorphic, this specific adapter left me feeling that probably, there are no shortcuts when attempting to create a high quality device. 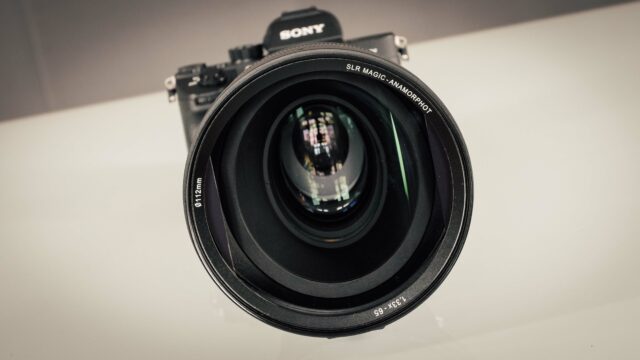 The new Anamorphot 65 is a completely different story. First the specs: 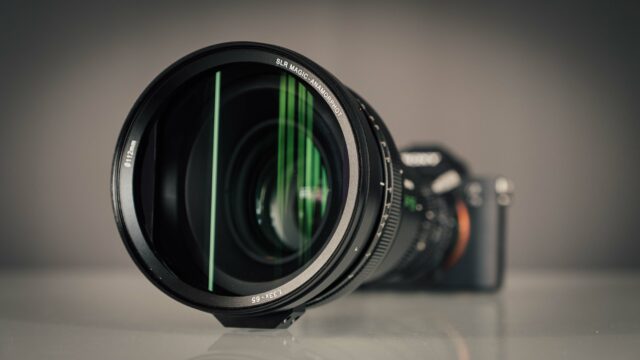 The above two FUJINON MK lenses were introduced about 2 years ago and since then, managed to capture the heart of many filmmakers. The quality for their price is great and their size and weight is perfect for many shooting occasions. I’ve tested the adapter on the E-mount version of the lenses, but this is the place to remind everyone that FUJINON will soon start shipping their own X-mount version of the lenses, bearing some extra benefits for users, as the lens will be able to communicate with most FUJIFILM camera bodies. Speaking of which, there are modified FUJINON MK lenses to M4/3 mount, so practically speaking, those lenses will fit on Olympus or Panasonic cameras too.

The SLR Magic Anamorphot 65 was built with both mentioned lenses in mind and I have to admit that mechanically speaking, the fit is perfect. 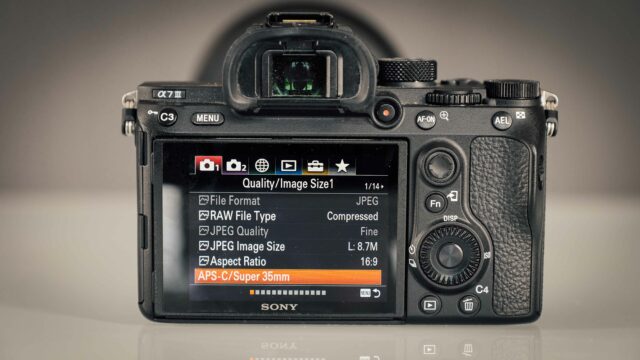 Attaching the Anamorphic Adapter to the FUJINON MK Lens

For best optical performance, please perform a lens back focus check prior to attaching the lens adapter to the FUJINON lens itself. Right after, the  procedure of putting the adapter on the lens is fairly easy, although, for whatever reason, it was a bit easier for me to attach the adapter to the FUJINON MK 50-135 than to the MK 18-55. After the attachment, make sure to place your camera and lens/adapter on a flat surface to ensure correct aligning of the adapter and lens.

On the camera front – if working with a full frame camera like the Sony a7XX – don’t forget to change to APS-C/Super 35mm in the menu settings. As a side note, it is unfortunate that there is no “de-squeeze” function in those Sony a7XX cameras, as what you see in the LCD/VF is NOT what you get! On the positive side, since the adapter is lightweight, it is possible to work handheld and even without lens support, although if you do have the opportunity to add support, please do so.

Photo exported from the timeline. Quality of the adapter glass “off-center” is good too!

For the last few days I was running around equipped with the Sony a7 III, two FUJINON MK lenses and the adapter. I can report that I liked what I saw, but with some reservations. In terms of which lens to use, the FUJINON MK 50-135 looks to be the obvious choice, as its complete focal length can be used when the adapter is attached to it. The thing is that the starting point of 50mm is too narrow for my taste and in addition, sharp focusing was extremely challenging for me and as a result, much of the footage I took when using this lens, seemed to be a bit off. Now, switching to the FUJINON 18-55mm, it was as if the adapter just got a new life. Although focusing was not always easy, (more about that in a second), the images I was able to capture were simply wonderful. I really like the fact that the adapter is able to keep sharpness almost from edge to edge. So where’s the catch? As predicted, you can not use the complete offered lens focal length but rather a part of it, starting at 30mm – which is almost perfect for anamorphic work. On the narrow side, 55mm is a bit to short, but for planned projects, where you have the possibility to be closer to your subject of interest, it will certainly do. 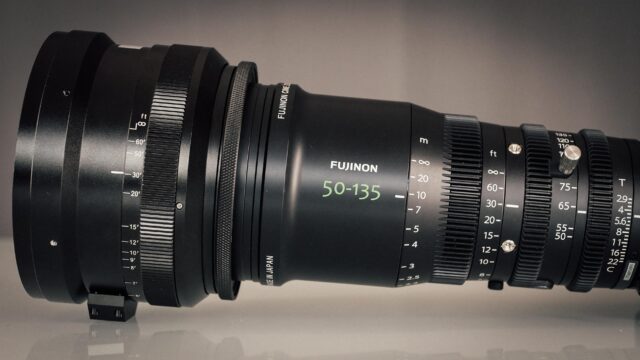 So far so good, but as with many other products, there is this little (big) thing that makes the overall user experience, when using the lens adapter, far from being perfect. It’s the double focus procedure necessity, meaning, focusing must be preformed on both, the lens and the adapter itself. The good news are that the marking on both is very similar and as the anamorphic adapter was made with the FUJINON MK lenses in mind, the alignment is perfect, so if your focus mark on the lens is 10ft. just turn the adapter focus ring to the same number value in order to achieve perfect focusing.

It’s not that we haven’t seen it before, but in this case it is simply a pity, as it does take time to focus both. Moreover, there is absolutely room for mistakes. I really wonder if it is possible to build a “custom handle” that can be attached to the lens focus ring on one side and the adapter focus ring on the other, in order to simplify the process of focusing. (Sorry, I can’t think of a solution to make the life of focus pullers any easier)… 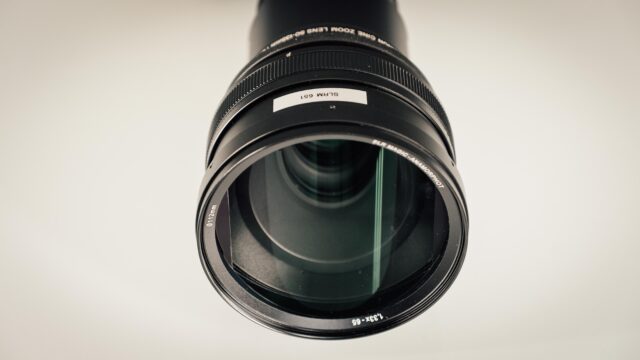 SLR Magic Anamorphot 65 on a FUJINON lens. My favourite is the MK 18-55mm

This time I’ll base my conclusion on three points: Price, usability and optical performance. Price is a subjective thing. I do think that for what you can get when working with this anamorphic lens adapter, the price is manageable. Usability is were this attachment scores the least. It is the double focus procedure that will slow you down when working and on top, might cause some hesitations when focusing during filming (and lets face it, as the resolution goes up, the days of soft images are numbered)… When it comes to optical performance, I really like what I saw (I especially salute SLR Magic for staying in-line with the FUJINON’s MK lenses’ performance and not choosing to go the “crazy flares” path). The combination of SLR Magic’s Anamorphot 65 together with the FUJINON MK 18-55mm is perfect to use when budget is a concern yet an anamorphic look is desired. Now I just need to invent something to focus both at the same time….

The above video was edited on Adobe Premiere CC latest edition. Shot on Sony a7 III, PP7 (S-Log 2), mostly on 800 ISO, and treated with Film Convert.

Music used in the above review is taken from Art-list Music theme: Me and You by Oliver Michael

Do you like the quality of the footage shot with this anamorphic adapter? Would  you like me to upload the anamorphic file for you to download and observe at home? Let me know in the comment section below.