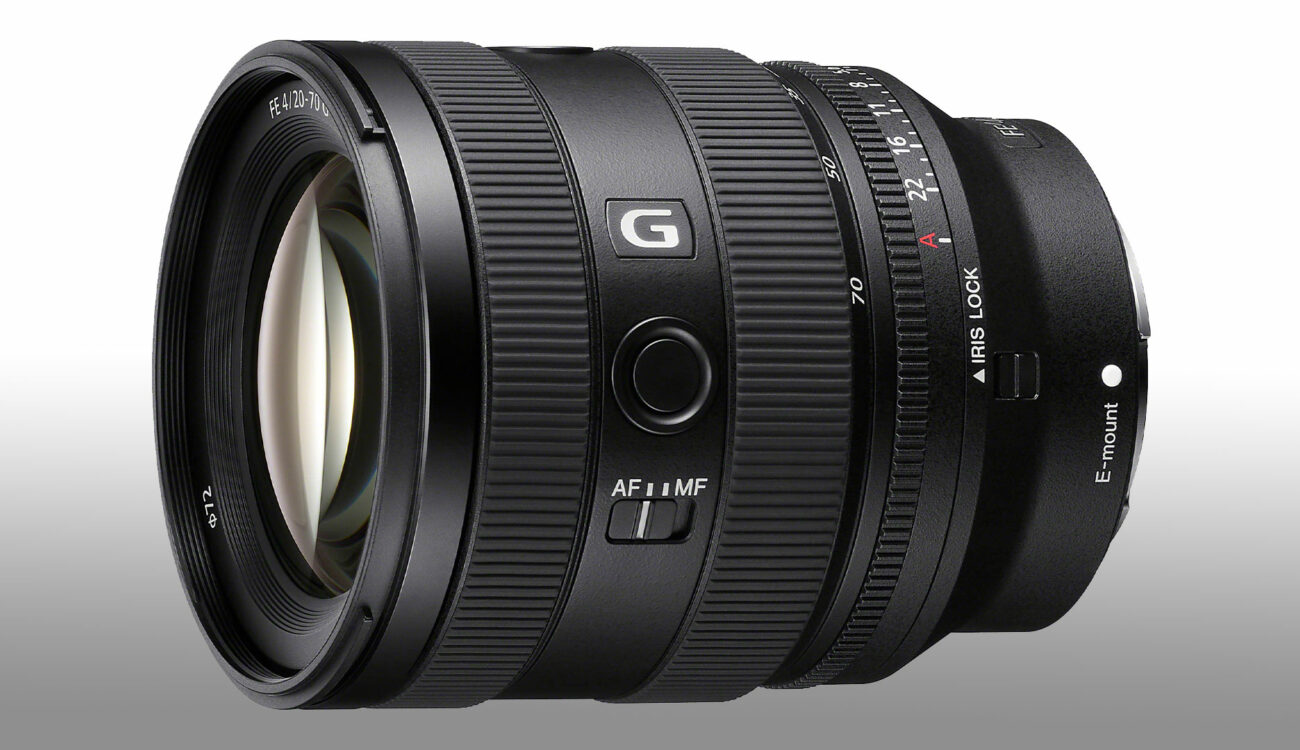 by Jakub Han11 days ago

The new Sony FE 20-70mm f/4 G lens is a standard full-frame zoom lens with an extended wide-end reach. It offers two focus hold buttons, a manual iris ring with a lock and “click on/off” switch, and a focus ring with linear response MF. The compact and lightweight lens can utilize 72mm front filters and is weather-sealed. It will ship in March 2023 for $1,098.

Sony just announced a new full-frame zoom lens that starts at an ultra-wide 20mm and goes all the way up to 70mm while having a constant f/4 aperture. We have seen a 20-40mm f/2.8 TAMRON lens announced last year that offered a shorter zoom range in exchange for a wider aperture. Now, let’s take a short look at the new Sony FE 20-70mm f/4 G lens (model name: SEL2070G).

As Sony points out, by expanding the wide end from 24mm to 20mm, the lens offers more versatility for situations sich as vlogging interior architecture photography and videos, and so on. Thanks to the slightly higher constant aperture of f/4, the new 20-70mm lens is also quite compact and lightweight. It weighs approximately 488g (17.3oz) and is 99mm (3.9″) long. There is a 72mm front filter thread and the lens body is dust- and moisture-resistant. The front lens element features a fluorine coating that repels fingerprints, dust, water, oil, and other contaminants.

When it comes to ergonomics, on top of the zoom and focus rings, the lens also includes an iris ring, so if needed, the aperture can be set manually on the lens. There is also an iris lock switch to prevent unwanted changes while shooting and a “click on/off” switch to provide click-less operation for iris-pulls in video. Furthermore, the lens features an AF/MF switch and customizable focus hold buttons in two locations for more convenience.

The minimum focus distance is 11.8″ (30cm) at the wide end and up to 9.8″ (25cm) at the telephoto end of the zoom range. The 9-blade circular aperture is available between f/4 and f/22. Optically, the lens comprises two AA (advanced aspherical) elements, one aspherical element, three ED (extra-low dispersion) glass elements, and one ED aspherical element. Thanks to the design, Sony claims the lens corrects chromatic and spherical aberration for good optical performance across the whole zoom range. Optimized coatings add high flare and ghost resistance.

The FE 20-70mm f/4 G should also offer fast AF for both stills and video, according to Sony. The lens focus group is driven by two of Sony’s latest XD (extreme dynamic) linear motors for fast, quiet, and low-vibration focus drive. Sony says thrust efficiency has also been improved over previous models resulting in up to a 60% increase in AF speed.

Further video-oriented improvements include reduced focus breathing as well as reduced focus and axial shift when zooming. The focus ring supports a linear response MF, so it will make manual focusing (with or without follow focus) easier when needed. Last but not least, Sony claims they optimized the active stabilization of Sony cameras to work well with the lens on the 20mm wide end. The lens itself does NOT have optical IS.

Do you use a Sony camera for your video work? What do you think of this new standard zoom lens with an extended wide end? Let us know in the comments section underneath the article.