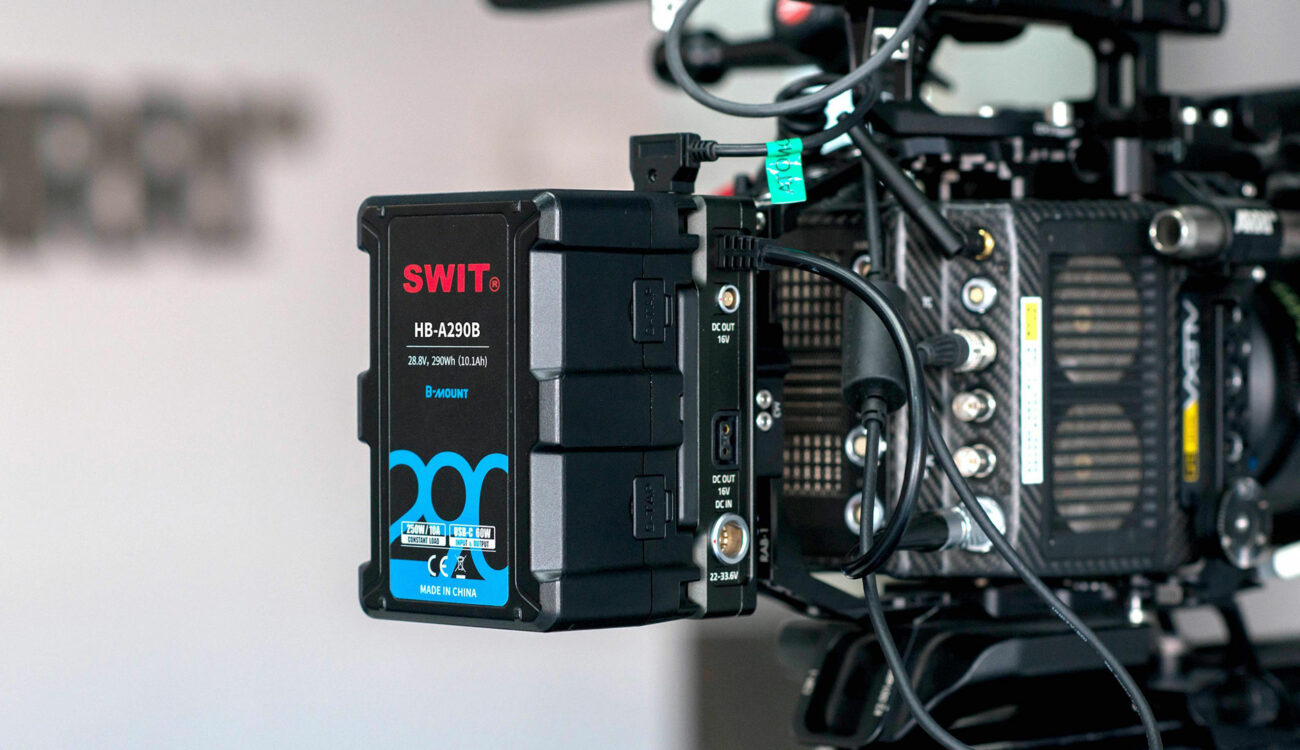 SWIT recently launched its first lineup of products with the new ARRI B-Mount 12/24V standard: the SWIT HB-A290 battery, the PC-P461B 4-channel fast charger, and a series of hot-swap plates for ARRI cameras. Let’s take a closer look at all these new powering options from SWIT!

In 2019, ARRI made B-Mount their new battery and powering standard for cameras and lighting. However, moving from the 14.4V V-Mount/Gold Mount standard takes time. Indeed, you can’t set a new standard if minimal products are available for customers/rental houses.

Bebob recently launched its entire lineup of powering options with a B-Mount. In the footsteps of the German manufacturer, SWIT has just introduced their first battery, fast charger, and hot-swap plates with a B-Mount.

According to the manufacturer, you can use the battery’s USB-C port to fully charge it in 5 hours 30min, using a 20V/3A USB-C PD charger.

On the left side of the battery, you’ll find the release switch, a power check button, and an OLED screen. The OLED screen will show various information, including battery percentage, remaining running time, USB status, and a protection warning code if the battery detects that something is wrong.

At the back of the battery, there is a handy little LED flashlight that you can activate by double-pressing the power check button. It could be helpful at the end of a shoot when you need to pack out your gear.

Last but not least, according to SWIT, the HB-A290B rugged casing can survive a 1.2m drop. With the battery’s 1.52kg/3.35lbs weight, I would be more worried about breaking the ground/floor than the battery itself.

SWIT also launched the PC-P461B B-Mount fast charger, which can fully charge up to four batteries simultaneously within 3 hours and 50 minutes. Indeed, the SWIT HB-A290B has 100W/3A fast charging capabilities, so there was a need for a 33.6V/3A (100W) fast charger.

On the side of the charger, you’ll find a large 3.5-inch color display that shows the power percentage, charging current, voltage, battery cycle times, and charging abnormal alert.

All hot-swap plates feature a built-in 32Wh battery that supports a 200W constant load for at least 2 minutes. In addition, there is a small status screen on the side of the hot-swap plates. When you remove the B-Mount battery from the plate, a countdown timer will indicate how much time you have to insert a new battery.

At the bottom of the plates, there is a 24-33.6V DC 8-pin LEMO input to feed your camera rig from mains power.

What do you think about all these new SWIT B-Mount powering options? Do you believe B-Mount will replace V-Mount/Gold Mount anytime soon? Don’t hesitate to let us know in the comments down below!