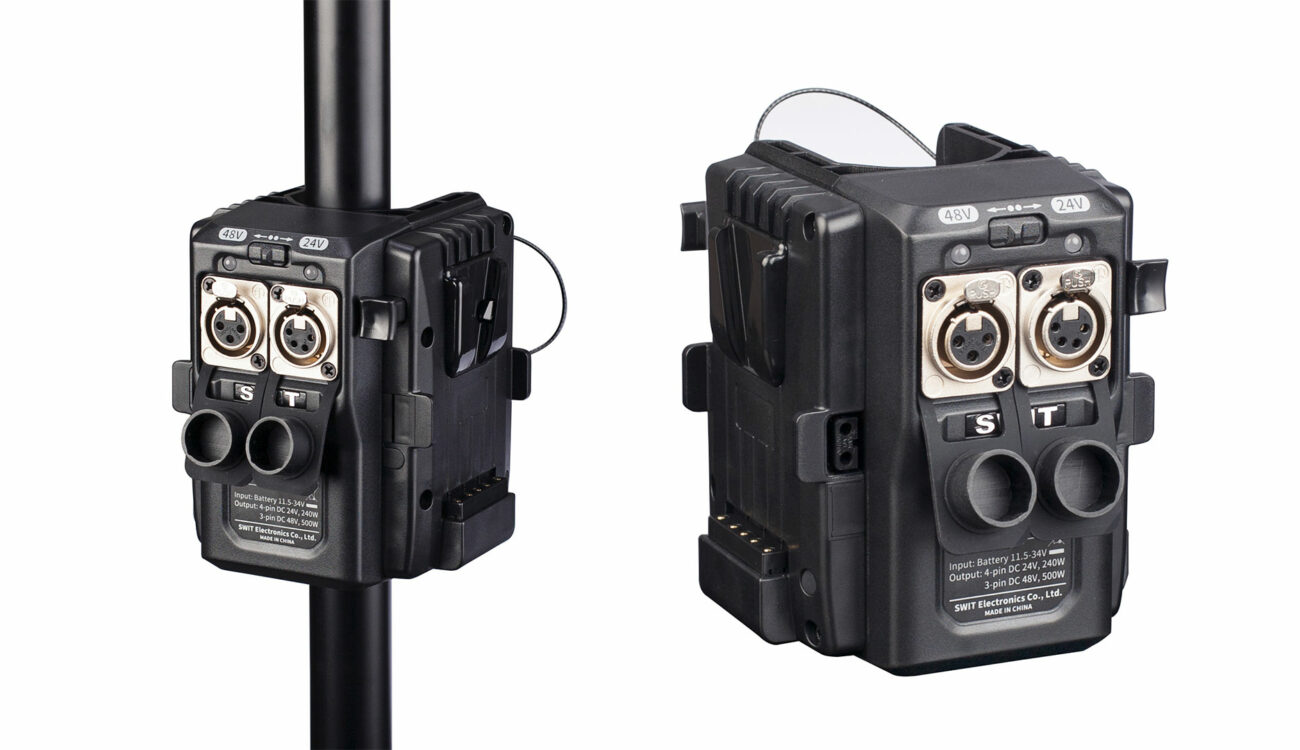 SWIT has released a 24/48V light stand power adapter capable of powering an Arri SkyPanel S60/S120 and even the ARRI Orbiter at full power: the SWIT TD-R210S. This adapter allows you to drive these high power ARRI LED lights with only two V-mount batteries. Let’s take a closer look at it!

The Arri SkyPanel S60/S120 and the latest ARRI Orbiter that we saw during IBC 2019 are state-of-the-art LED fixtures; there are no doubts about it. However, when you’re shooting far from a power outlet, you can’t power these lights with Sony NP-F batteries. Jokes aside, ARRI LED fixtures require a lot of battery power if you want to shoot in remote locations.

The Arri SkyPanel S60/S120 do have two power input ports: a “regular” male 3-Pin XLR for mains power, and a male 4-Pin XLR for battery operations. Both of the lights are capable of running on 24V batteries.

However, if you do so, the light will only shine at 50% of its maximum output. This is not ideal, but it’s better than nothing.

The ARRI Orbiter does feature a 3-Pin XLR power input, but it requires 48V power.

At the moment, only a few products are capable of powering the ARRI Orbiter, like the bebob CUBE 1200, that retails for $3695.00.

If you already have a couple of high-power V-Lock batteries at your disposal, the SWIT TD-R210S battery adapter could be an excellent solution for you.

The SWIT TD-R210S is a light stand power adapter that can attach to any 25-45mm light stand. It is capable of running nearly every 24/48V LED on two V-Lock batteries. But, SWIT engineers designed this product to specifically power ARRI LED lights, which, as you probably got it, are some of the most power-hungry fixtures available on the market right now.

There’s a switch on top of the connectors that allows you to change between 24 and 48V. To make sure you don’t make a mistake, there’s also a light above the connector currently outputting power.

The table above sums up SWIT’s battery recommendations. If you use “regular” 14.4V V-Lock batteries, you can reach a maximum load of 240W.

On the other hand, by using 14.4V/28.8V Bi-voltage V-Lock batteries – like the SWIT PB-H290S or other brands like bebob, Hawk Wood, Anton Bauer, and so on – you can reach the maximum 48V/500W output to power your ARRI lights at full strength.

Finally, for rental houses, a kit is available that consists of a Pelican-style case, four SWIT PB-H290S batteries, the SWIT TD-R210S, and a battery charger.

SWIT also has a 4-battery power station box that can power ARRI fixtures and doubles up as a charger, the SWIT S-4040 that retails for $650.00.

What do you think about the SWIT TD-R210S? Did you ever shoot with ARRI LED lights? What type of batteries do you use to power your lights on remote locations? Don’t hesitate to let us know in the comments below!