by Andrew CollingsJanuary 23rd, 2020
The mirrorless revolution is changing the game and promises a world where most lenses can be adapted onto just about any camera. But there are important rules in this new world. Consider this your handbook. 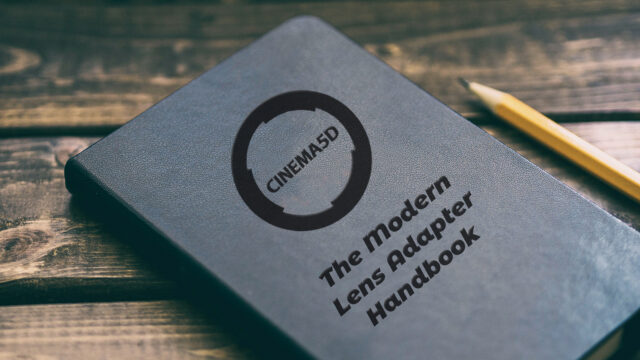 It has long been a rule of thumb that any DSLR lens can be mounted onto any mirrorless camera. If you have Canon or Nikon lenses, you can easily mount them onto anything with a Sony E-Mount. So with Nikon and Canon’s new lens mounts, I’m sure a lot of us are curious whether, for example, we’ll be able to mount the Canon 28-70mm f/2 on an a7R IV, or for that matter on a Nikon z6. Will these lenses be just as adaptable as their EF lenses, or are all the new lens systems mutually exclusive?

An Intro to Lens Adapters

Canon EF glass has been prevalent because of its quality, sure, but also its flexibility – you’re just as likely to see a Canon zoom on a C300 Mark II as you are to see it on a RED Weapon or sometimes even a Sony FS7.  That’s because of the prevalence of quality adapters. For an electronic lens system like EF or Nikon G you need something a little more complicated, but if you want to get even simpler than that, indie filmmakers still hunt down and actively shoot on vintage SLR lenses – all you need for that is a cheap metal adapter ring. Canon FD is a popular format, but I personally go for Pentax M42 mounts. $15 on Amazon and you’re in business. 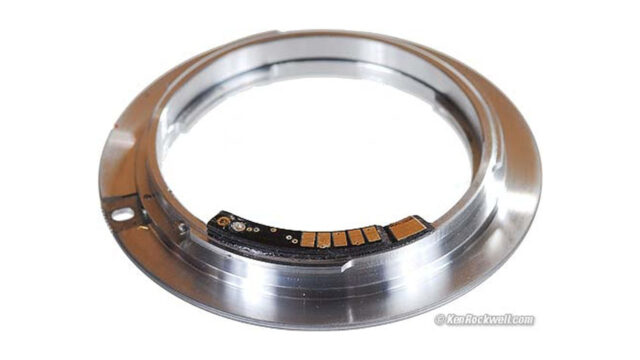 Not all lens adapters are created equal, though. And it’s not like you can stick any lens on any camera. To understand why one lens can be adapted when another cannot, you have to ask one simple question: what is the flange focal distance? In essence, it is the distance from the lens mount to the sensor (or film) plane on a given camera system. Lenses are designed to focus their image precisely at the film plane – no closer, no further. So the fundamental goal of adapting a lens is to correctly space it from the film plane of a foreign camera. 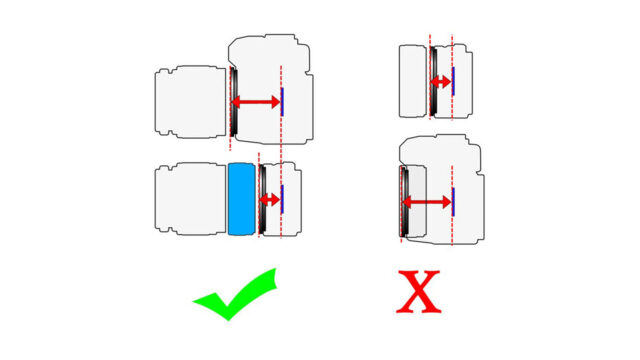 Lenses from a system with a longer flange focal distance mount easily onto cameras with shorter distances, while cameras with very short flange focal distances are able to accept almost any lens from a longer-flange system. Canon’s EF mount has a depth of 44mm, making it a ready and willing host to the longer-flanged Nikon G lenses. Canon EF lenses cannot mount onto Nikon DSLR bodies, though. At least, not without corrective glass elements.
Once you introduce these corrective glass elements, quality can fall off very quickly. The acrobatics these adapters are performing to get your image in place must be extremely precise, and most of the time you will find that they just don’t quite achieve the results you are hoping for. Maybe the sharpness of the lens is decreased. Maybe infinity focus is no longer possible. These are fairly expensive problems to solve, and frankly, if you have the money then you’re better off re-mounting your lenses anyways. Pictured: too much hassle

So the question you are dying to know is: what is the flange depth for my lens? My camera? I’ve tried to compile as many mounts as I can think of in this handy-dandy chart. 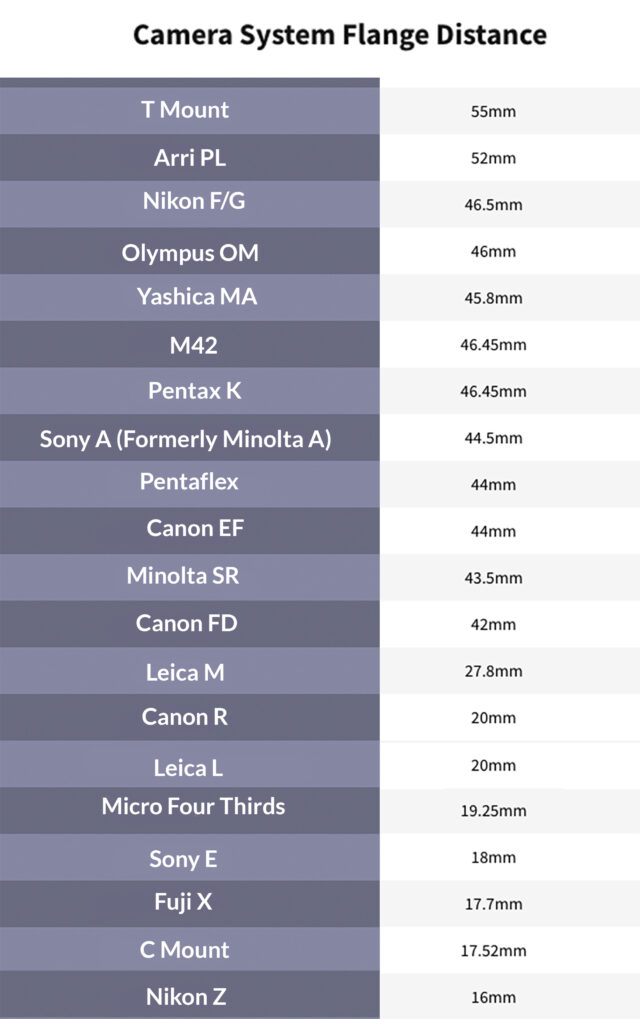 How to Read This Chart: A Users’ Guide

There are two cardinal rules of lens adapting:
Number one:
The flange of the lens must be longer than the flange of the camera
Number 2:
The image size of the lens must match or exceed the sensor size of the camera
You can’t stick a Sony E mount lens onto a Nikon D850, because the lens would need to be mounted far too physically close to the sensor. No can do. However, you could totally adapt a Nikon F lens onto a Sony E-mount camera. The adapter, in essence, acts as a spacer between the lens and the new host camera. You can create more space, but good luck taking it away.
Similarly, even though you could probably technically mount a Micro Four Thirds lens on a Sony E mount camera – the flange depth is greater, after all – you wouldn’t really accomplish much because MFT lenses are designed for a sensor half the size of something like Sony’s a7R IV.
In practical terms, this means that the chart flows downhill, but somewhat selectively. Broadly speaking, for a given lens to work with your camera body, it just needs to be higher on the chart than your camera’s mount. (Almost) anything above is a fair game. But anything below is almost certainly going to create more problems than it’s worth.

Defending the Flange Depth of DSLRs

If you have been reading this Lens Adapter Handbook closely, you may have noticed a couple of things. First off, there is not a single mount in the 30-40mm range. Not one. And secondly, DSLRs and SLRs overwhelmingly occupy the upper ranges (40mm+) while Mirrorless systems all hover around 20mm. What causes that, you ask?
Mirrors.
Lest we forget – SLR stands for “Single Lens Reflex,” meaning that one lens feeds the image to both the viewfinder mechanism and the film/sensor. And the mirror is what makes that all possible. It swings in and out of the path of the light, selectively allowing it to pass through to the image plane. Those swings need some room to occur – about 40mm, give or take. 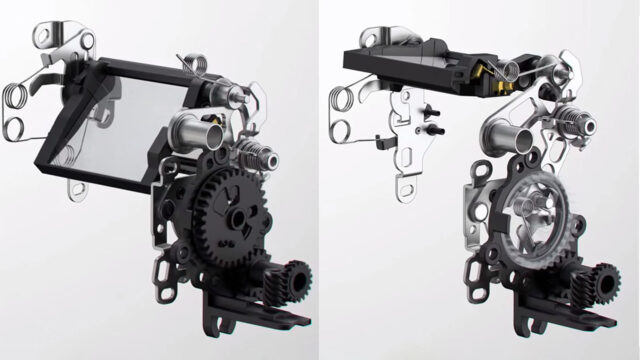 And below that, of course, you find the mirrorless cameras (and rangefinders). These systems have only the barest of requirements. Camera makers like to place filters in front of their sensors to manage the wavelengths coming into the sensor (IR  filters), and usually (but not always) include a low-pass filter to eliminate moiré. Past that, all they have to worry about is keeping the lens from knocking against the sensor and cram in any electronic connections necessary for autofocus and such. Ever wonder what 18mm from mount to sensor looks like? It’s surprisingly small in person. But even without a mirror, there are limitations. Modern digital cameras are more than just a sensor and a socket. IBIS (In-Body Image Stabilization) operates by moving the sensor itself to counteract small shakes and motions. To avoid catastrophic collisions between sensor and lens requires a little bit of wiggle room. Most cameras also feature Optical Low-Pass Filters that help clean up moiré and Infrared (IR) Filters that remove light pollution from outside the visible spectrum. All of this is to say that every single millimeter shaved off below 20 is a battle. Nikon is very proud of having made it down to a 16mm flange depth. What advantages that earned them remain to be seen. 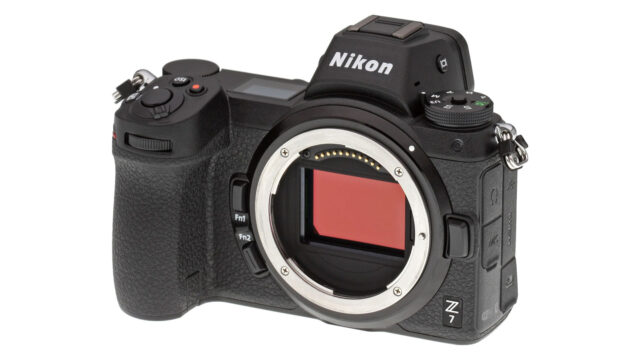 It is an extremely thin camera. Maybe that’s enough reason

Bringing it Back: The Future of Nikon Z, Canon R, FUJIFILM X, and Sony E

So knowing what we know now, the landscape seems fairly clear – Canon R lenses will be the most flexible with their 20mm flange depth allowing them to move downstream to Sony and Nikon bodies. Nikon Z-mount cameras, being the shallowest, will act as a sort of universal acceptor, taking Canon and Sony lenses with ease. The math checks out, but there is one major complication of having flange distances that are differentiated by just 2mm.
The large gap between, for example, Nikon F’s flange depth at 44mm and Sony E’s 18mm depth left a solid 26mm where engineers could cram all the electronics required to get Nikon lenses talking to Sony bodies. Without those, you have no control over aperture, no autofocus, and no metadata. We will have to wait and see if those same functions can be achieved with only the 2mm of clearance between Canon R and Sony E mounts, or 4mm if you adapt to Nikon Z. If not, cross-system adapters may only be realistic for manual lenses. 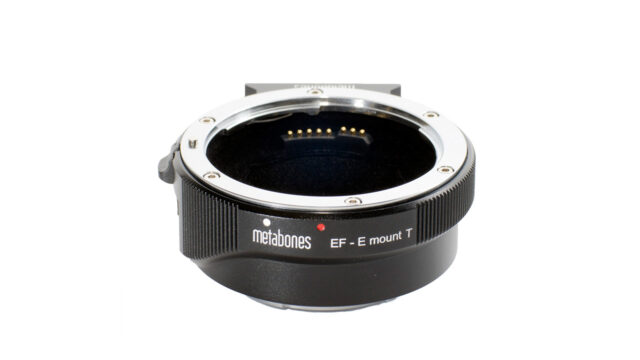 All that space isn’t just decorative

Beyond straight adapters, you quickly get into a whole world of specialized tools, extra features, and all that jazz. They’re a little outside the scope of this handbook, but let’s do a quick lightning round of other variations on this theme.

These adapters screw onto the front of your lens and convert them to an anamorphic field of view. They do not change your lens mount, they do not go between your lens and your camera. They create a wider image by horizontally squeezing the image onto the sensor.

Some lens adapters, while not supporting any kind of autofocus, can still at least confirm when the image is or is not in focus. For Canon cameras, this means that the focus points in your viewfinder will blink red, and, if turned on, the camera will beep the same way it would with an autofocus lens. This can be helpful when using all-manual glass.

This is probably the most common alternative to an adapter. Metabones (and many smaller brands) have created adapters that not only convert from one mount to another, they also convert from one image size to another. A full-frame lens can be refocused onto a Super35 sensor and look almost exactly the same as it would on a full-frame sensor. See also: LucAdapters, an emerging kind of speedbooster that is attached INSIDE the lens mount.

Switching lens mounts is a huge risk and the source of a lot of potential problems. It is a necessary evil as lens technology develops and new features come into play. The introduction of autofocus brought with it a wave of lens mount updates, and the mirrorless revolution has brought another. And with each wave, camera manufacturers try to smooth the transition to their new platform with a custom adapter that brings their old lenses to their new platform.
Canon and Nikon have both introduced top-notch lens adapters at relatively low prices to help their current users transition smoothly into their mirrorless lineups. Although somewhat forgotten now, Sony did the same at the introduction of their E-mount in 2010. Because these adapters come straight from the original manufacturers, there is no reverse-engineering required, no guesswork, and no compatibility problems. They know their own lenses, and they know their own cameras. These adapters are the gold standard for speed,  accuracy, and consistency.

Adapting DSLR lenses onto mirrorless bodies is a wonderful way to expand your lens selection and broaden your creative choices. Between the Panasonic Lumix S1, the Canon EOS R, and the Nikon Z6, I expect we will be living in an adapter-heavy world for the next few years. These cameras are innovative and powerful, but they all suffer from their shallow native lens pools. If the electronic adapters can be sorted out, Canon may find itself in the very interesting position of having the most adaptable lenses mount on the market. Their choice of a deeper flange depth than Sony or Nikon is perhaps a cunning strategic move. Remember: adaptability flows downhill. As long as your lens has a deeper flange than your camera body and the image circle is big enough, everything will work out just fine. It’s already starting to become a reality
Do you stick with native lenses? Are you already mixing and matching? Are there any questions left unanswered? Let us know in the comments!
pl mountef adapteradapterlens adapterEF mountmount adapterhandbookpl adapter
Share this article

8
Camera Review
SIGMA fp L Review for Photographers - Good Performer, but not for Everyone
May 28th, 2021fiber_manual_recordAlexandra Thompson