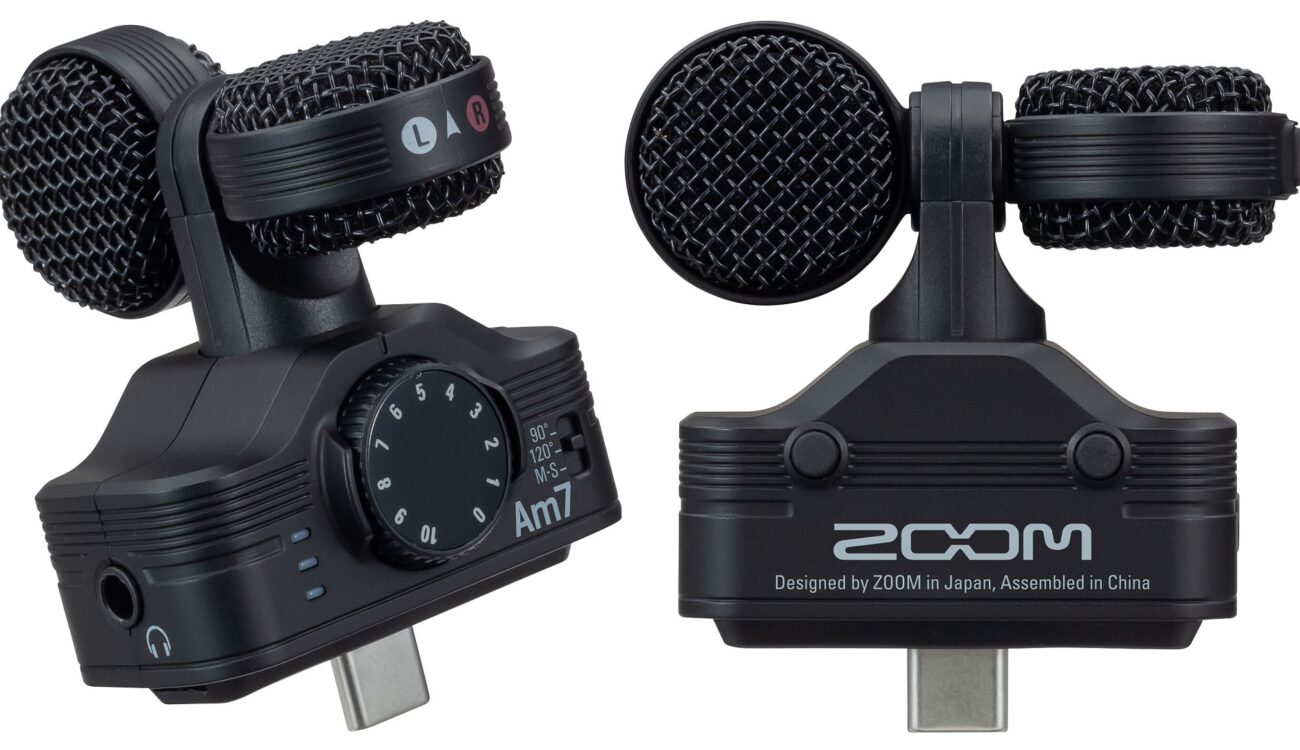 The Zoom Am7 is a new M/S stereo microphone for Android smartphones. It plugs directly into the USB-C port of the phone and provides 48 kHz/16-bit audio with a possibility to set stereo width, gain, and monitor the recording via a 3.5mm jack. The Am7 has a rotating capsule and is compatible with the Zoom Handy Recorder app for adjustments and sharing. Available soon for $99.99.

There is a wide range of microphones that are compatible with smartphones nowadays. Naturally, as modern phones offer decent video quality, people want to accompany it with decent audio quality, too. RØDE, for example, recently added iOS compatibility to its VideoMic NTG shotgun microphone.

When it comes to ambient plug-in stereo microphones for phones, Zoom has been offering the iQ7 with a Lightning port for iPhones for a while already. Recently, the company introduced the Android version of this microphone – the Zoom Am7. Let’s take a look at its features and specs.

Zoom Am7 Microphone for Android

Zoom’s Am7 is a M/S stereo microphone that can plug directly into the USB-C port of an Android smartphone. M/S means Mid/Side as opposed to a classic Left/Right stereo recording. The microphone includes two capsules – a directional “mid” mic that captures audio coming from the front, and a bidirectional “side” mic that picks up ambient sounds from the sides.

With a stereo-width slider, users can set the stereo width to either 90° or 120°, or they can record the mid and side mic signals as raw data and use Zoom’s Handy Recorder Android app to adjust the stereo width afterwards. The app also allows collapsing the signal into phase-coherent mono, suitable for voice recordings such as interviews. In addition to this slider, there is also a gain knob (+3 to +43 dB) and a set of three LEDs to show the level meters.

The Zoom Am7 records audio at broadcast-quality of 48 kHz/16-bit. A nice feature is the 3.5mm headphone jack to monitor audio through headphones while recording. This jack can also be used as a line out for recording an analog backup recording if desired. The Am7 weighs only 1.1 oz (31.8 g).

The Zoom Am7 features a rotating capsule design. The microphone can align with the camera to capture audio while recording horizontal or vertical video or to better suit an audio-only recording. For audio recording only, the capsule can be rotated to an audio position. The Am7 also offers a selfie mode for creating vlogs and the like.

The microphone is designed to work with Zoom’s free Handy Recorder app, which is now available on Google Play. The app allows users to monitor audio without latency, and to record, mix and share the audio right from the Android device. The Handy Recorder app can automatically upload to SoundCloud for public sharing or Google Drive for sharing with a selected group.

The Zoom Am7 microphone is now available for pre-order. Shipping is estimated to start by the end of December 2020. The retail price has been set to $99.99 (around €98 plus VAT in Europe), which is the same as with the Zoom iQ7.

What do you think about the Zoom Am7? Which microphone do you use with your smartphone? Let us know in the comments underneath the article.